Dropbox is a file sharing and productivity startup created by Drew Houston and Arash Ferdowsi in 2007.

Dropbox is a company that offers platforms for users to store and share files as well as collaborate on projects. It was established in 2007 by Drew Houston and Arash Ferdowsi. The company reported a revenue of $1.39 billion in 2018. The company has acquired 25 companies by January 2019, some which have been developed to become parts of Dropbox’s services, such as Orchestra Inc. (Mailbox) and Hackpad (Paper). As of 2019, Dropbox has operated as a public company. Dropbox is based in San Francisco, California, United States.

Dropbox’s main service is its file storage, sharing, and collaboration platform, which is available on mobile (iOS and Android) and desktop applications (Linux, macOS, and Windows), alongside a web-based service. Since its official release in 2008, new individual users will receive 2GB of storage for free. Dropbox also offers paid storage subscription for businesses, allowing multiple users to operate using a business account, equipped with enterprise-grade security and team-based collaboration tools. Since 2017, Dropbox also operates Paper, a collaborative tool for document editing by multiple users. 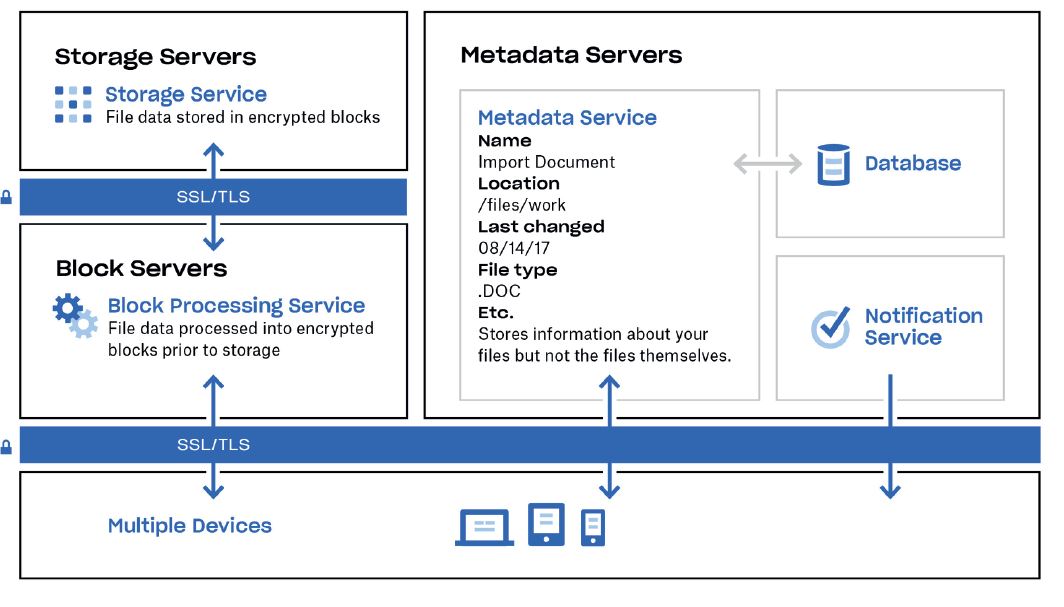 Each file uploaded to Dropbox are secured in blocks at a separate server before being transferred into the storage servers. All files are encrypted with a unique cipher during processing in the block servers. When content in files are modified, the changed information would be transmitted to the block server prior to being sent to storage. Files in Dropbox contain metadata – which are basic information such as date uploaded and modified as well file names – where they would be kept on a separate metadata server for database purposes. Any changes to files – deletion, modification, or otherwise – would be alerted to users with file access through the notification service. Dropbox maintains its own data storage servers called Magic Pocket where around 90% of users’ files are kept, although until 2016, the company exclusively used Amazon Web Services’ cloud storage.

For its Paper service, Dropbox operates a separate system for the storage and retrieval of uploaded documents. The Paper Application Servers function as a location to process user requests in regards to the document, alongside alerting the users with access of any modification to the document. When documents are in static states, they are stored in the paper database.

Dropbox uses Transport Layer Security (TLS) exclusively for data transfer from between servers or between device to servers. When at rest, all data are stored in multiple data centers equipped with 256-bit Advanced Encryption Standard (AES). Dropbox Paper documents use the same security standard, though it is not stored in data centers; it is instead managed by third-party providers.

Before its IPO in 2019, Dropbox managed to raise a total funding of $1.7 billion through nine rounds, with its last round being a debt financing held on March 2017. This round managed to amass $600 million financed by six investors. In total, since its first seed round in 2007, 37 investors have contributed capital to Dropbox. Previous investors include JP Morgan Chase, RBC Capital, Deutsche Bank, Macquarie Group, and Goldman Sachs.

Dropbox starts trading at NASDAQ, closing at $28.48 per share on March 23rd.

Dropbox launches Paper, a document collaboration application which has been in development since October 2015.

Dropbox ceases operations and development for Carousel and Mailbox applications and merged several of Carousel features to Dropbox's application.

Title
Author
Date
Publisher
Description
The pure hell of managing your JPEGs
Natasha Mascarenhas
August 27, 2021
TechCrunch
Hello and welcome back to Equity, TechCrunch's venture capital-focused podcast, where we unpack the numbers behind the headlines. Natasha and Alex and Grace and Chris were joined by none other than TechCrunch's own Mary Ann Azevedo, in her first-ever appearance on the show. She's pretty much the best person and we're stoked to have her on the pod. And it was good that [...]
Daily Crunch: Copenhagen-based Leapwork lands $62M Series B co-led by KKR and Salesforce Ventures
Richard Dal Porto
August 26, 2021
TechCrunch
Hello friends and welcome to Daily Crunch, bringing you the most important startup, tech and venture capital news in a single package.
Playbook, which aims to be the 'Dropbox for designers,' raises $4M in round led by Founders Fund
Mary Ann Azevedo
August 26, 2021
TechCrunch
When Jessica Ko was head of design at Google and then Opendoor, she realized that her teams spent about 90% of their time digging around Dropbox looking for assets. In many cases, they'd find older versions. Or they couldn't find what they were looking for. Or even worse, they'd accidentally pick the wrong asset. "It [...]
Superhuman Raises $75M in Series C Funding
FinSMEs
August 5, 2021
FinSMEs
About | Advertise | Contact | Disclaimer | News | The Daily Deal Newsletter FinSMEs.com by FinSMEs is licensed under a Creative Commons Attribution-NonCommercial-NoDerivs 3.0 Unported License.
Behind our latest brand campaign: For all things worth saving, Dropbox
August 5, 2021
WebWire
Our brand campaigns always reflect the changing role that Dropbox plays in the ways we work and live. Last year, our campaign showed how people were adapting to new ways of life and remote work during the pandemic. This year, we wanted to highlight how our customers rely on Dropbox for the things they care about most. "For all things worth saving, Dropbox" highlights the content our customers store in Dropbox. We wanted to show that they're more than just files--they're precious possessi...
SHOW MORE

Software as a service (SaaS)

Nasdaq
Glassdoor ID
415350
Board of Directors

Series B round
Patents Assigned (Count)
799