NASDAQ (National Association of Securities Dealers Automated Quotations) is an American stock exchange. It is now stylized as Nasdaq.

Nasdaq is a global stock exchange headquartered in New York City. Nasdaq is an electronic exchange, and unlike the New York Stock Exchange it is not a physical trading point or auction-style exchange. Nasdaq functions as a market dealer and does not require a broker to facilitate trade. Market Makers provide liquidity, inventory controls, and bid and ask prices in this kind of trade. Over 260 market maker firms are involved in the NASDAQ exchange. Nasdaq provides two indices for traders and investors: the Nasdaq Composite and the Nasdaq 100. These provide the value of the stocks listed on the exchange, with the Nasdaq Composite including all stocks and the Nasdaq 100, providing values for the top 100 non-financial companies listed on the exchange.

In 2020, there were 3,889 companies listed on the exchange, and it is estimated that over 4.5 billion shares are traded daily through Nasdaq. In order to be listed on Nasdaq, companies must meet certain requirements set by Nasdaq. Some larger companies listed by Nasdaq include Amazon, Alphabet, Tesla, Facebook, Nvidia, PayPal, Netflix and Comcast.

Nasdaq values sustainability practices and efforts as well as bringing diversity into the marketplace. On August 6, 2021, the U.S. Securities and Exchange Commission (SEC) approved a diversity rule put forth by Nasdaq, requiring companies on the exchange to have at least two "diverse directors," including at least one "who self-identifies as female" and one "who self-identifies as either an underrepresented minority or LGBTQ+." 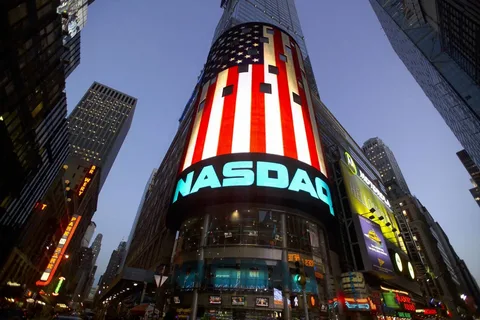 Nasdaq began operations on February 8, 1971 as a subsidiary of the National Association of Securities Dealers (NASD), now known as the Financial Industry Regulatory Authority (FINRA). Nasdaq was the first electronic stock exchange. They launched their website in 1996. Nasdaq formed Nasdaq-AMEX via their merger with the American Stock Exchange in 1998. Amex was later purchased by NYSE. In 2001, the European Association of Securities Dealers Automatic Quotation System (EASDAQ) was purchased by Nasdaq, becoming Nasdaq Europe and now known as Equiduct.

Nasdaq began operating as a national securities exchange and officially broke off from the NASD in 2006. Nasdaq combined with the Scandinavian exchange group OMX and formed the Nasdaq OMX Group in 2007. That same year Nasdaq OMX purchased the Boston Stock Exchange and the following year they purchased the Philadelphia Stock Exchange. Nasdaq first launched their mobile application in 2009. Nasdaq OMX became a founding member of the United Nations Sustainable Stock Exchanges on June 18, 2012; the company makes public sustainability reports available through their website.

Getting to Know the Stock Exchanges

What is The Nasdaq Stock Exchange?

Dow Jones & Company
Board of Directors