Beyond Meat makes plant-based meat alternatives such as burgers, sausages, chicken strips, and ground beef. Beyond Meat was founded in 2009 by Ethan Brown and is based in Los Angeles, California.

Beyond Meat makes plant-based meat alternatives such as burgers, sausages, chicken strips, and ground beef. Beyond Meat was founded in 2009 by Ethan Brown and is based in Los Angeles, California. Brown grew up on a dairy farm in Western Maryland and previously pursued a career in clean energy, where he learned about the impact of livestock on climate change.

In April 2019, ahead of going public, Beyond Meat increased the size of its shares and planned to offer 9.5 million shares at $23-25. The company is listed on the Nasdaq under the ticker symbol BYND and began trading in May 2019. Book-running managers for the offering included Goldman Sachs & Co. LLC, J.P. Morgan and Credit Suisse as lead managers as well as BofA Merrill Lynch and Jefferies and William Blair as co-manager.

In 2018, Beyond Meat and its competitor Impossible Foods both won the United Nations’ Champions of the Earth Award in the category of Science and Innovation. 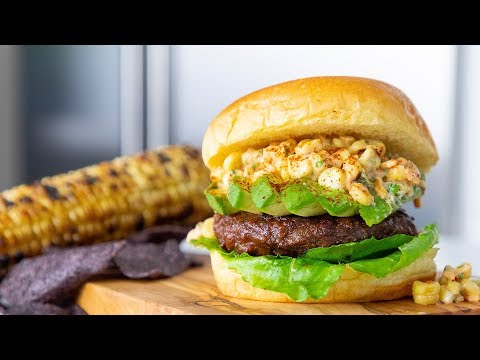 Examples of restaurants in the US with the Beyond Burger on their menu include TGI Fridays, Del Taco, Hamburger Mary’s Bar, Taco Bell, Dunkin' Donuts, Carl's Burger, and Veggie Grill. The product is also served at Universities and them parks such as Legoland.

The main ingredients in the original Beyond Burger are pea protein, beet coloring, and beet juice to give the essence of “blood”. Potato starch and coconut oil help create juiciness. The 2.0 burger available at Carl’s Jr. and A&W includes brown rice and mung bean proteins for taste and texture that resembles meat. Lab technicians at the Beyond Meat research and development lab in El Segundo, California, are trained meat sommeliers.

Nutritionally, the Beyond Burger patty has 20 grams of protein and approximately 20 grams of fat, which are levels comparable to a beef patty. The use of food processing steps, where plant ingredients are heated, cooled and exposed to pressure, has attracted some criticism. The Beyond Burger has 30 percent of the daily recommended iron and zero cholesterol.

Beyond Meat has reduced its environmental impact through shifting packaging of the Beyond Sausage from plastic to a fully compostable tray. The company has implemented water recirculation systems at their Missouri production facility to reduce water usage by 80 percent. Solar tubes are installed at its headquarters.

On January 1, 2012, Beyond Meat closed their series B funding round, raising an undisclosed amount of funding.

On May 1, 2013 Beyond Meat announced a series C funding round, closing the round with an undisclosed amount of funding from Closed Loop Capital.

On July 29, 2014, Beyond Meat announced a series D funding round, closing the round with an undisclosed amount of funding from Obvious Ventures.

On October 11, 2016, Beyond Meat announced it completed their series F funding round, raising an undisclosed amount of funding from General Mills, Power Plant Ventures, The Humane Society of the United States, and Tyson Foods.

In March 2020, Taco Bell began serving Cheesy Fiesta Potatoes, Spicy Potato Soft Tacos, and other menu items customized with potatoes.Taco Bell is partnering with Beyond Meat to develop its first plant-based meat option for its United States menu, which it plans to test launch in 2021.

Beyond Meat shares jumped 7% in trading after the Taco Bell announcement.

Shares were priced at $25 a share Wednesday evening started trading at $46 a share shortly after noon on the Nasdaq, and went to $65.75 by the end of the session, for a gain of 163%.

Beyond Meat applies for IPO under the symbol BYND.
Beyond Burger launches in UK
Beyond Meat raises a $50,000,000 series H round from Cleveland Avenue, DNS Capital and Evolution VC Partners.
Page 1 of 2

Closed Loop Capital
‌
Beyond Meat Series A round, April 2011

12 places to find Beyond Meat and Impossible Burgers in LA

A persistent CEO, a meat buyer, and a gamble—how fake meat finally made it to beef aisle

Alton Brown on the End of Meat as We Know It

Availability in Restaurants, Distribution and Retail

Beyond Sausage VS Sausage Sausage

With $72 Million in Funding, the Entrepreneur Behind Beyond Meat Pursues Innovation Over Profit

Beyond Meat: The Beyond Burger Taste Test!

Title
Author
Date
Publisher
Description
Beyond Meat opens its first production plant in China
Rita Liao
April 8, 2021
TechCrunch
About a year after Beyond Meat debuted in China on Starbucks's menu, the Californian plant-based protein company opened a production facility near Shanghai to tap the country's supply chain resources and potentially reduce the carbon footprint of its products. Situated in Jiaxing, a city 85 km from Shanghai, the plant is Beyond Meat's first end-to-end [...]
Chinese startups rush to bring alternative protein to people's plates
Rita Liao
April 5, 2021
TechCrunch
In many ways, China is the ideal testbed for alternative protein. The country has a long history of imitation meat rooted in Buddhist vegetarianism and a growing, health-conscious middle class.
I Avoided Fake Meat for Years. That Was a Big Mistake
Joe Ray
April 3, 2021
Wired
Our food writer had been steering clear of Impossible, Beyond, and other plant-based meat replacements--until he finally cooked with some.
Investors get a rise out of Walmart's agreement to stock more Beyond Meat
Jonathan Shieber
March 9, 2021
TechCrunch
Beyond Meat shares soared today on the heels of an announcement that Walmart is beefing up its relationship with the purveyor of meatless protein patties, sausages, and balls. 900 stores will now be stocking Beyond Meat's hot Italian sausages and its party packs of beefless burgers -- those grilling delectations for the omnivores, vegetarians and [...]
Flow Water taps former Nestle exec as new CEO as it goes to IPO
Alex Bitter
March 1, 2021
Business Insider
Maurizio Patarnello spent 25 years at Nestle, much of it at the Swiss giant's water brands. Now, he says he's looking for a new challenge at Flow.
Beyond Meat strikes partnerships with McDonald's and Yum Brands
CNN
February 26, 2021
CTVNews
Beyond Meat has inked two new major new deals, with McDonald's and Yum Brands, that will bring new plant-based items to fast food menus.
Beyond Meat rallies after McDonalds and Yum Brands partnerships overshadow weak sales
Emily Graffeo
February 26, 2021
markets.businessinsider.com
Beyond Meat rallied after announcements that the faux-meat maker is partnering with fast-food giants McDonald's and Yum! Brands.
Beyond Meat rallies after McDonalds and Yum Brands partnerships overshadow weak sales
Emily Graffeo
February 26, 2021
Business Insider
Beyond Meat rallied after announcements that the faux-meat maker is partnering with fast-food giants McDonald's and Yum! Brands.
How Nanoemulsion Technology Is Drastically Affecting the Food & Beverage Industry
FinancialNewsMedia.com
February 24, 2021
www.prnewswire.com:443
/PRNewswire/ -- In the past several years, there has been a steady increase in the global nanoemulsion in food & beverage market, and many reports continue to...
Redefine Meat is moving plant-based proteins from patties to steaks
Jonathan Shieber
February 16, 2021
TechCrunch
The Israeli startup Redefine Meat, which has developed a manufacturing process to make plant-based proteins that more closely resemble choice cuts of beef than the current crop of hamburger-adjacent offerings, has gotten a big vote of confidence from the investment arm of one of Asia's premier food brands. The company has raised $29 million in [...]
Daily Crunch: Calendly valued at $3B
Anthony Ha
January 26, 2021
TechCrunch
A popular scheduling startup raises a big funding round, Twitter makes a newsletter acquisition and Beyond Meat teams up with PepsiCo. This is your Daily Crunch for January 26, 2021. The big story: Calendly valued at $3B Calendly, which helps users schedule and confirm meeting times, has raised $350 million from OpenView Venture Partners and [...]
PepsiCo goes Beyond Meat in new partnership
The Associated Press
January 26, 2021
CTVNews
PepsiCo and Beyond Meat are creating a joint venture to develop snacks and drinks made from plant-based proteins.
Beyond Meat and Pepsi partner for plant-based protein snacks and drinks - Business Insider
Annabelle Williams
January 26, 2021
Business Insider
Beyond Meat stock soared over 25% after the announcement of a new Pepsi partnership on Tuesday morning.
Beyond Meat spikes 39% after it forms partnership with Pepsi to develop plant-based snacks - Business Insider
January 26, 2021
Business Insider
Shares of Beyond Meat were up 77% year-to-date at Tuesday's intra-day highs and hit levels not seen since July of 2019.
PepsiCo and Beyond Meat launch poorly named joint venture for new plant-based food and drinks
Jonathan Shieber
January 26, 2021
TechCrunch
PepsiCo, the planetary purveyor of sugary drinks, greasy chips, and (weirdly) oatmeal, hummus, and gazpacho(?) is partnering with Beyond Meat, the publicly traded plant-based protein provider, on a poorly named joint venture to hawk new plant-based food and beverages to consumers. The PLANeT Partnership (which was clearly branded by the same genius behind the comic [...]
Pollo Tropical® Is Beyond Excited To Help You Start The New Year With A Resolution You Can Keep - And Eat
Pollo Tropical
January 19, 2021
www.prnewswire.com:443
/PRNewswire/ -- Pollo Tropical® is announcing new menu items for those who want a delicious way to eat well this new year. Back by popular demand, Pollo...
Plant-Based Movement Continues Growing as Consumers Flock to Healthier Food Options
FinancialBuzz.com
January 15, 2021
www.prnewswire.com:443
/PRNewswire/ -- 2020 was an interesting year in regards to consumer spending habits, with some trends resurfacing from the dead and others falling flat. One...
Daily Crunch: Samsung unveils Galaxy S21 line
Anthony Ha
January 14, 2021
TechCrunch
Samsung lowers prices with its latest Galaxy S phones, Google completes its Fitbit acquisition and Beyond Meat is coming to Taco Bell. This is your Daily Crunch for January 14, 2021. The big story: Samsung unveils Galaxy S21 line Samsung's new line of phones includes the S21, S21+ and S21 Ultra, priced at $799, $999 [...]
Beyond Meat stock leaps 16% after Taco Bell announces partnership with the faux-meat producer
Emily Graffeo
January 14, 2021
markets.businessinsider.com
Taco Bell Beyond Meat rose as much as 16%, to $144.78 a share, after Taco Bell announced it's partnering with the faux-meat producer to explor...
The business of meatless meat with Beyond Meat CEO Ethan Brown
Nilay Patel
December 22, 2020
The Verge
Nilay Patel talks with Beyond Meat founder and CEO Ethan Brown about what the company is focused on since its IPO in 2019 and how it is fairing during the pandemic.
SHOW MORE

Page 1 of 4
beyondmeat.com
Is a