Andrew Grove is a former CEO and chairman of Intel. He is a Hungarian-born American businessman, engineer, and author.

Andrew "Andy" Steven Grove (born András Gróf) is best known for being the man who built Intel. He was the CEO and chairman of Intel and is credited for driving the growth in both the power and innovative potential of microchips in the semiconductor industry. Grove is also often considered the father of Silicon Valley. His work ethic, his drive, and his “creative confrontation” approach became the managerial model for generations of Silicon Valley entrepreneurs and executives, including Apple’s co-founder Steven P. Jobs, who regularly sought Grove’s counsel. 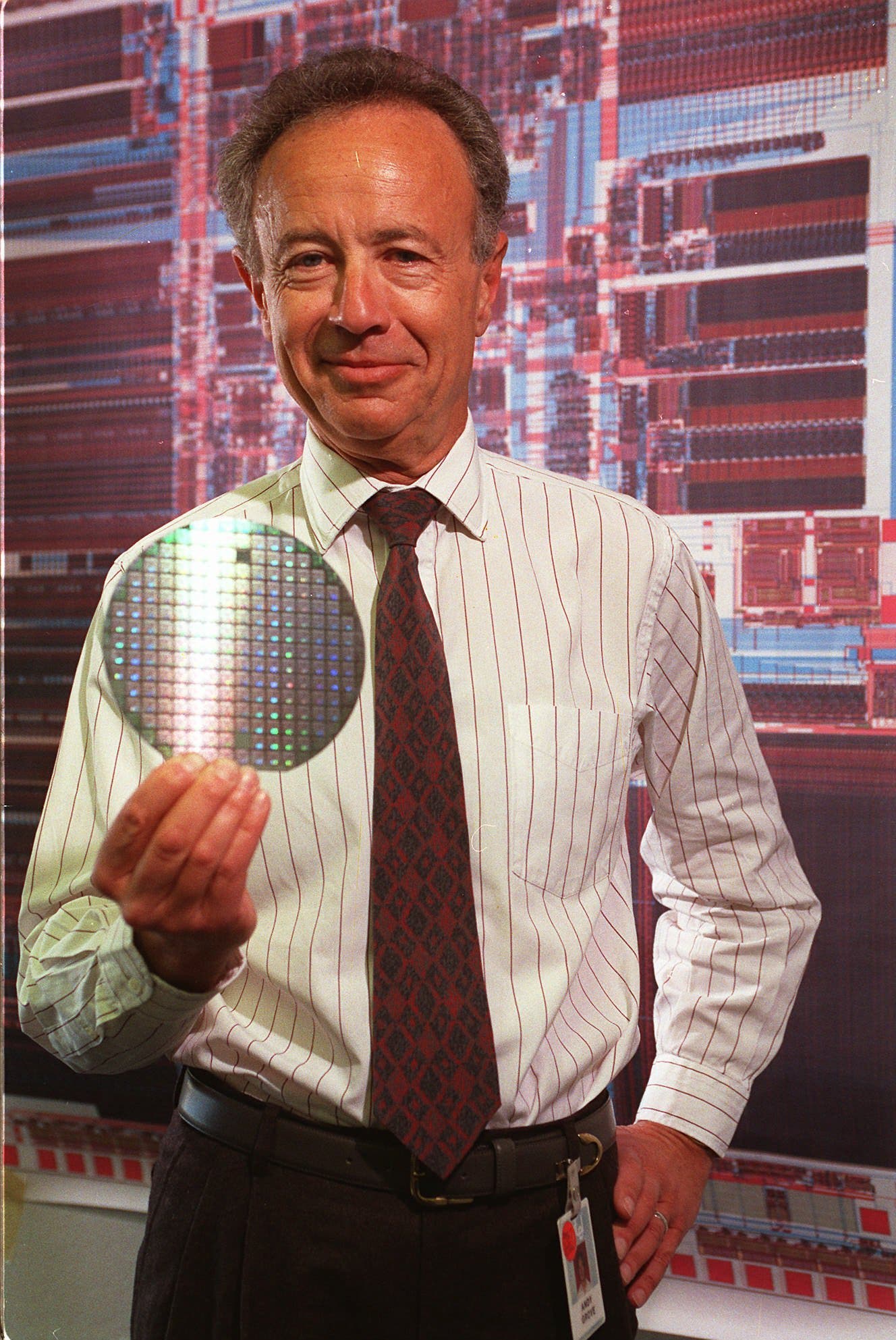 Mr. Grove in 1991 with a silicon wafer, part of the process to make Intel’s 386 microprocessor.Credit:Paul Sakuma/Associated Press

Andrew Grove joined Intel in 1968 as its third employee, after its two founders Robert Noyce and Gordon Moore. Prior to Intel, Grove had worked with the two founders at Fairchild Semiconductor, and they recruited him at Intel to be the task-master and "keep order."

Grove played a critical role in the decision to move Intel’s focus from memory chips to microprocessors and led the firm’s transformation into a widely recognized consumer brand. Under his leadership, Intel produced the chips, including the 386 and Pentium, that helped usher in the PC era. The company increased annual revenues from $1.9 billion to more than $26 billion during his time.

Grove was famous for his rigorous, no-nonsense, confrontational, nonhierarchical management style. He wrote about his management approach in his book High Output Management, earning high praise from other business leaders like Mark Zuckerberg, John Doerr, and Marc Andreessen. Grove also was known for taking big risks. “Business success contains the seeds of its own destruction,” he said. “Success breeds complacency. Complacency breeds failure. Only the paranoid survive.” He wrote about this management approach in his book Only the Paranoid Survive.

“Andy approached corporate strategy and leadership in ways that continue to influence prominent thinkers and companies around the world,” said Intel's former chairman Andy Bryant. “He combined the analytic approach of a scientist with an ability to engage others in honest and deep conversation, which sustained Intel’s success over a period that saw the rise of the personal computer, the Internet, and Silicon Valley.”

During his time there, Intel was also the birthplace of nonhierarchical, open settings and low-partitioned cubicles rather than walled-in offices. Grove was among the earliest CEOs to sit in a cubicle, which led to future CEOs following suit. "Most tech companies, despite employee complaints, followed the lead of Intel," Nikil Saval wrote in his book Cubed: A Secret History of the Workplace.

After graduation from the University of California at Berkeley in 1963 and prior to joining Intel, Andrew Grove was hired by Gordon Moore at Fairchild Semiconductor as a researcher. During his time with Fairchild, Grove rose to assistant head of R&D under Moore. When Robert Noyce and Moore left Fairchild to found Intel in 1968, Grove was their first hire.

In 1997, Andrew Grove was named Man of the Year by Time magazine for being “the person most responsible for the amazing growth in the power and the innovative potential of microchips.” In 2004, he was named the Most Influential Business Person in the Last Twenty-Five Years by the Wharton School of Business. In 1994, Grove received the first Heinz Award in Technology, the Economy and Employment, and in 1974, Grove was awarded the J.J. Ebers Award "For Outstanding Technical Contribution to Electron Devices".

The IEEE computer society established the IEEE Andrew S. Grove Award in 1976, which awards one to three people every year for outstanding contributions to solid-state devices and technology. The IEEE award consists of a bronze medal, certificate, and cash honorarium.

Andrew Grove wrote several books, listed below. His books High Output Management (1983) and Only the Paranoid Survive (1999) remain some of the most highly regarded management books.

Grove also wrote numerous articles in Fortune, The Wall Street Journal, and The New York Times and was the author of a weekly column on management, which was carried by several newspapers.

"City College is an American dream machine," Grove said in a telephone interview with The New York Times in October 2005, adding that he hoped to help keep it that way. "It is extremely important for us to cherish the dynamics and institutions that made this country what it was when I came here."

Soon after arriving in the United States from Hungary, Andrew Grove enrolled in college. He earned a degree in chemical engineering from the City College of New York and completed his PhD in chemical engineering at the University of California at Berkeley in 1963. He was also a lecturer at the Stanford University Graduate School of Business and received numerous honorary degrees including an honorary Doctor of Laws degree from Harvard University in 2000.

In 2000, Andrew Grove was diagnosed with Parkinson's disease at age sixty-three. He went on to study the disease and became a senior advisor to the Michael J. Fox Foundation for Parkinson's Research in 2006.In 2008, Grove announced his intention to dedicate a portion of his estate, up to $40 million, to the foundation. This bequest established The Legacy Circle, the foundation's planned giving society.

In 1958, Andrew Grove married Eva Kastan, a refugee originally from Austria, whom he met the previous summer at a New Hampshire resort where both worked as waiters. They moved to California, where Grove earned his PhD in chemical engineering at the University of California, Berkeley. They had two daughters and eight grandchildren. Grove was diagnosed with prostate cancer in 1995 and Parkinson's disease in 2000. He died on March 21, 2016.

Andrew Grove was born András Gróf in Budapest, Hungary on Sept. 2, 1936, to Jewish parents. He survived the Nazi occupation by taking a false name and hiding with Christian families while his father was sent to a concentration camp. He later survived the 1956 Soviet invasion of Hungary, fled across the Austrian border in 1956, and immigrated to the United States in 1957.When he arrived in the United States, he was penniless, spoke little English, and had severe hearing loss from when he had scarlet fever as a boy. He wrote about his early days and his escape from the Soviet invasion in his book Swimming Across.

Andy Grove was the godfather of modern tech CEOs