John Doerr is Chairman of Kleiner Perkins. He has invested in numerous technology companies, including Google, Amazon, Sun Microsystems, and Netscape.

John Doerr is the chairman of Kleiner Perkins. He is also an engineer, venture capitalist, and the author of the best-selling books Measure What Matters and the Speed and Scale, which is an action plan to solve the global climate crisis.

Doerr has served as an advisor or on the board of several companies and groups, such as Amazon and Google. He is part of the leadership of the Speed & Scale organization, a global climate crisis initiative. In 2009, Doerr was appointed to President Obama's Economic Recovery Advisory Board, and in 2011, he was appointed to President Obama’s Council on Jobs and Competitiveness.

Doerr is the only investor to appear on Forbes' Midas List of top venture capitalists every year for the past two decades, and his net worth is estimated at $11 billion. In May 2022, he and his wife donated $1.1 billion to establish the Stanford Doerr School of Sustainability, which was the largest contribution ever made to the school. 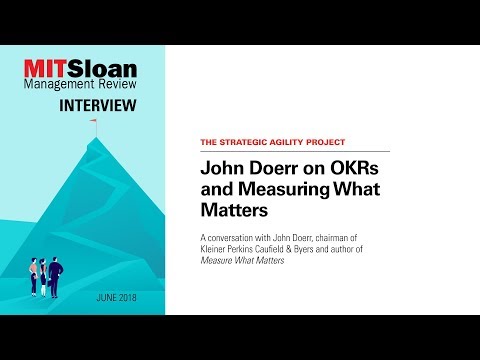 John Doerr on OKRs and Measuring What Matters

Doerr has been with the firm for over forty years, helping entrepreneurs build their teams and companies. He led Kleiner Perkins' $12.5 million investment in Google in 1999 and was an early investor in DoorDash, Slack, and many more. His support of Jeff Bezos led to a $7 million investment that launched Amazon, the largest online retailer in the world. A pioneer of Silicon Valley’s cleantech movement, he has invested in zero-emissions technologies since 2006, deploying more than a billion dollars towards more efficient solar cells, better batteries, biofuels, lower-carbon cement, alternate proteins, and electric vehicles.

John Doerr started his career in 1975 in Silicon Valley at Intel, around the time Intel invented the 8-bit microchip. He had been seeking an internship at a venture capital firm but was turned down by all the ones he applied to. Five years later, in 1980, he joined Kleiner Perkins because they promised to back him in his startup company.

John Doerr holds both a B.S. and M.S. degree in electrical engineering from Rice University. He also earned his MBA from Harvard Business School in 1976. He attended the Chaminade College Preparatory School in St. Louis, Missouri.