The semiconductor industry comprises companies specializing in the development and production of semiconductors and semiconductor devices, such as transistors, diodes, and integrated circuits (ICs).

A semiconductor is a substance with specific electrical properties such that it can be both a conductor and an insulator. Semiconductors are typically solid chemical elements or compounds that conduct electricity under certain conditions. This makes semiconductors an ideal medium to control the electrical current in everyday electrical appliances and serve as the basis for many electronic devices, including computers. The substance's conductance can vary depending on the current or voltage applied to a control electrode or on the intensity of irradiation by infrared (IR), visible light, ultraviolet, or X-rays. The electrical properties of a semiconductor are defined by the impurities it contains, known as dopants. 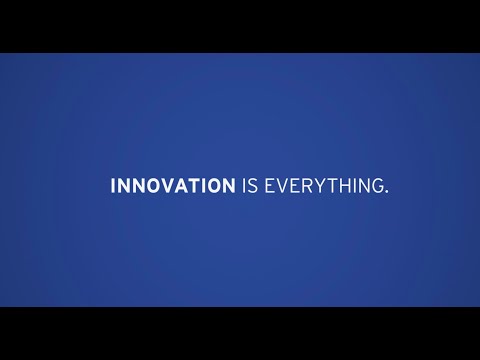 SIA's overview of the semiconductor industry

Moore's law is a term referring to the observation that the number of transistors in a dense integrated circuit (IC) doubles about every two years. Moore’s law is based on empirical observations that were first made by Gordon Moore in 1965. The doubling every year of the number of transistors on a microchip was extrapolated from observed data. The details of Moore's law have been adapted over time to better reflect the actual growth of transistor density, with the doubling interval first increasing to two years and then decreasing to around eighteen months. The exponential nature of Moore’s law has continued, creating decades of significant opportunity for the semiconductor industry. The original plot demonstrating Moore's Law from Gordon Moore's 1965 draft of his article published in Electronics magazine is shown below: 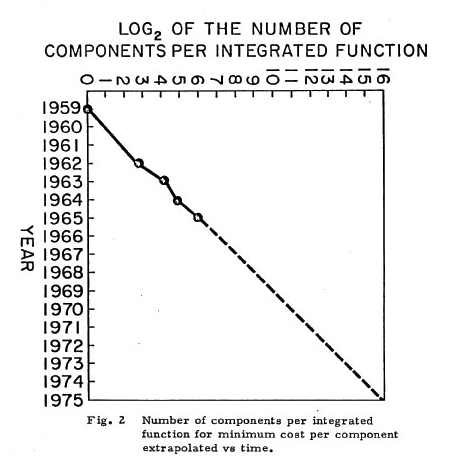 The semiconductor industry has benefited from the principle observed in Moore's law. It means that exponentially more advanced products can be produced at an increasingly lower cost. This is exemplified by the fact that smartphones have more computing power than the computers used by NASA in 1969 for the moon landing mission. 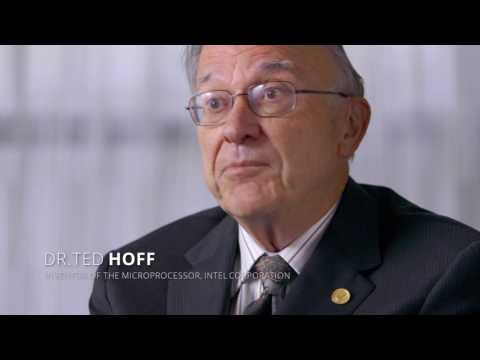 Semiconductors can be either a single element, such as Si or Ge, a compound made up of either group III-V elements or group II-VI elements, or an alloy, such as SixGe(1-x) or AlxGa(1-x)As, where x is the fraction of the particular element ranging from 0 to 1. Most semiconductor materials are crystalline inorganic solids, although a growing number of organic materials are also being investigated and used. Semiconductor materials are often classified according to their position or group within the periodic table. These groups are determined by the electrons in the outer orbit of the particular elements.

Second most widely used type of semiconductor and widely used in high-performance RF devices for its high electron mobility. Brittle material with a lower hole mobility than Silicon and relatively difficult to fabricate and increasing costs.

Finding growing use in microwave transistors where high temperatures and powers are needed. GaN is difficult to dope to give p-type regions and it is also sensitive to ESD, but relatively insensitive to ionizing radiation.

Used within LED technology producing a variety of colors depending on the addition of different dopants.

Used in many early semiconductor devices. Diodes show a higher reverse conductivity and temperature coefficient leading to thermal runaway. Not as widely used these days as better semiconductor materials are available.

Silicon is the most commonly used semiconductor material and has found extensive use since the 1950s, forming the basis of integrated circuit (IC) chips. One of the most abundant elements on earth (widely available in quartzite), silicon has four valence electrons and melts at a higher temperature than germanium (1,414 oC in comparison to germanium’s 938.3 oC). Extraction, purification, and crystallization processes for silicon are both efficient and economical. The element crystallizes in a diamond form for a relatively robust bond, giving silicon crystals strong mechanical properties.

It is possible to visualize the difference between conductors, insulators, and semiconductors by plotting the available energies for electrons in the material. Within free atoms, electrons have discrete energies. However, in solids, they form bands that can be separated into the valence and conduction bands. To conduct electricity, a material must facilitate the flow of charge carriers, and having electrons in the conduction band is crucial to the process of conducting electricity.

The valence band is the outermost electron orbital of an atom that electrons occupy. The conduction band refers to electrons with enough energy to move freely in the material. The energy difference between the highest occupied energy state of the valence band and the lowest unoccupied state of the conduction band is called the band gap and is indicative of the electrical conductivity of a material. 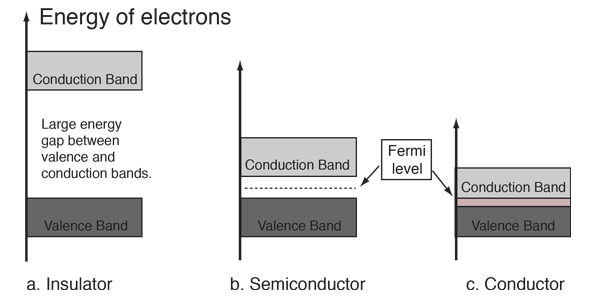 Electron energy bands for an insulator, semiconductor, and conductor.

An important parameter in the band theory of solids is the Fermi level. It refers to the highest occupied molecular orbital at absolute zero (0K). All electrons are in the lowest possible energy states at absolute zero, and the Fermi level can be described as the maximum energy an electron can reach at this temperature. The Fermi level is also equal to the total chemical potential (energy) required to add one electron to the body; it can be considered a hypothetical energy level rather than a real level that can be occupied by an electron.

Doping refers to the introduction of impurities into a semiconductor crystalline structure to modify its conductivity. The conductivity of a deliberately contaminated silicon crystal can be increased by a factor of 106.

Undoped or pure semiconductors are referred to as intrinsic semiconductors (also known as i-type semiconductors), with properties that are the result of only the material itself. Intrinsic semiconductors have the same number of electrons in the conduction band as there are holes in the valence band. A hole is one of the two types of charge carrier responsible for electric current in semiconductors. Holes are not physical particles in the way electrons are. Instead, they are the absence of an electron, which creates a missing bond. Holes can be seen as the opposite of an electron; they have a positive charge equal to that of the electron's negative charge. They flow through a material as electrons shift to fill the missing bond. 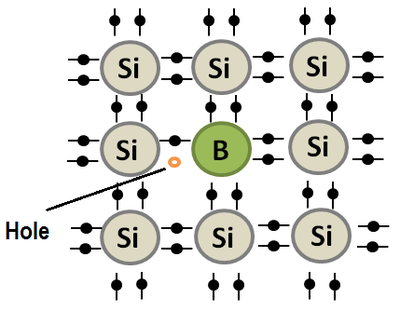 Demonstration of a "hole" in a silicon lattice.

Impure semiconductors that have been doped to change the electrical properties are referred to as extrinsic. There are two types of extrinsic semiconductors: P-type and N-type. P-type (positive) semiconductors have been doped with "acceptor" atoms, group III elements, such as Boron (3-valent dopant), reduce the overall number of electrons increasing the number of holes, see diagram above. With only three electrons in its outermost orbital, dopants such as Boron can catch an additional electron, leaving a hole in the valence band. Therefore, the electrons in the valence band become mobile with holes moving in the opposite direction to the movement of the electrons. With the additional electron, the dopant is negatively charged. However, as the atom is fixed in the crystal lattice only the positive holes are free to move, making them the majority charge carriers for P-type semiconductors.

N-type semiconductors have been doped with "donor" atoms, generally group V elements such as phosphorus (5-valent dopant), that increase the number of electrons. The introduction of an additional electron compared to the silicon lattice means more free electrons capable of conducting electricity are present in the semiconductor. This additional free electron requires much less energy to be lifted from the valence band into the conduction band, than the electrons which cause the intrinsic conductivity of silicon. The dopant atoms are positively charged by the loss of negative charge carriers but are fixed into the structure of the lattice and only the negative electrons are free to move. Due to the higher number of free electrons, they become the majority charge carriers for n-type semiconductors. 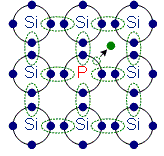 Example of N-type semiconductor doping with a phosphorus atom in a silicon lattice.

The dominant charge carriers for P-type (positive) and N-type (negative) semiconductors are holes and electrons respectively.

Semiconductors are a large area of research in both academia and the private sector. Active research areas include the following:

Transistor count defines the number of transistors in an electronic device. With modern ICs using MOSFETs (metal-oxide-semiconductor field-effect transistors, or MOS transistors), it generally refers to the number of MOSFETs on an integrated circuit (IC) chip. Transistor count is the most common method of measuring IC complexity (although the majority of transistors in modern microprocessors are contained in the cache memories, which consist mostly of the same memory cell circuits replicated many times).

With increasing transistor count, transistors have become significantly smaller. In 2001 transistors commonly had dimensions of 0.25 micron (micrometer, 10−6 meters), now transistors are on the nanometer scale (10-9 meters). As of 2022, the industry standard for commercially available chips is 7-nm transistors, with some high-end consumer devices, such as Apple’s M1 processors, shifting to 5 nm. In 2021, IBM unveiled new semiconductor chips with 2-nm silicon transistors allowing 50 billion transistors to fit onto a chip the size of a fingernail. These 2-nm are not expected in consumer electronics until 2023 at the earliest.

Many experimental designs have achieved smaller transistors based on different materials including graphene. However, these designs are yet to be commercialized.

With demands for smaller and faster integrated circuits, silicon is reaching the limits of its use. Research into new semiconductor materials is ongoing; candidates include the following:

The US semiconductor industry is a foremost contributing force to labor productivity across various industries in North America, from farming to manufacturing. Annually, within the industry approximately one-fifth of its revenue is invested into research and development ($44 billion in 2020), making it the second-highest share among all major US industries, topped only by the pharmaceutical industry.

Data provided by the Observatory of Economic Complexity (OEC) shows that the top US exports as of July 2021 were refined petroleum ($7.91B), aircraft parts ($7.41B), crude petroleum ($5.69B), petroleum gas ($5.35B), and integrated circuits ($4.74B)—making a semiconductor product the fifth top US export.

IDC predicted the semiconductor market to grow by 17.3 percent in 2021, compared with 10.8 percent in 2020. According to the IDC, the industry will undergo normalization and balancing by mid-2022, with a potential for overcapacity in 2023 as larger scale capacity expansions begin to occur towards the end of 2022. IDC lists mobile phones, notebooks, servers, automotive, smart home, gaming, wearables, and Wi-Fi access points as some of the growth-driving industries. IDC expects integrated circuit shortages to continue, though easing through 4Q21 as capacity additions accelerate.

Fortune Business Insights projected the growth of the global semiconductor market from $452.25 billion in 2021 to $803.15 billion in 2028 at a CAGR of 8.6% in the forecast period, 2021-2028. According to the research firm, the outbreak of COVID-19 had a significant negative impact on the global semiconductor industry, impeding its growth, which amounted to 3.3 percent in 2020. The firm also cited the US-China trade war and 2019's down cycle as causes of revenue contraction in the industry.

Fortune Business Insights pointed out that the semiconductor industry is dependent on the economic circumstances of the United States, since North America holds a dominant share in the market. Changes in the country's leadership have resulted in trade restrictions with China since 2018, and the continuation of these restrictions is expected to diminish the dominance of the US semiconductor market, potentially causing around a 16 percent decrease in market share. Moreover, tariffs applied to industrial goods and materials are impacting the import and export of components, affecting the manufacturing cost of the chips.

Companies involved in the semiconductor industry