Alchemy is a developer platform that helps companies to build scalable decentralized applications without the hassle of managing blockchain infrastructure in-house. The company's developer platform allows enterprises to build decentralized applications and allows the enterprises to enter the blockchain industry without the need to manage the blockchain infrastructure. Similar to the way Apple and Amazon built platforms to help developers build on PCs, smartphones, and the cloud, Alchemy is working to build a platform that helps developers build on modern blockchains. 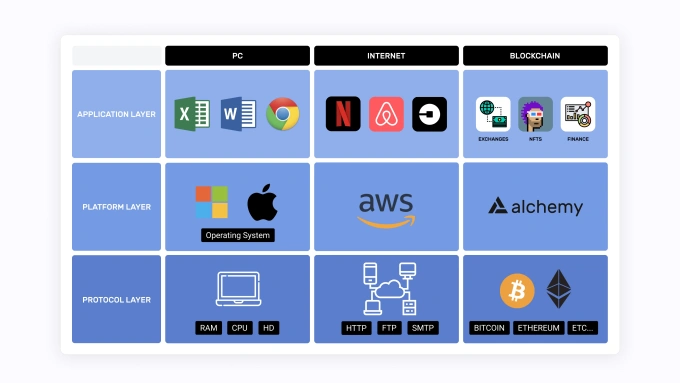 Graphic visualization of how Alchemy sees its place in blockchain and web3.

Alchemy's software tools provide an off-the-shelf kit to help scale crypto applications, primarily on the Ethereum blockchains. This has allowed crypto firms fast-track complicated and expensive tasks like debugging and writing to nodes. Alchemy's offerings include other blockchains, such as Flow, Polygon, Arbitrum, and Optimism. Many projects in blockchain such as Augur, Cryptokitties, Kyber, Radar Relay, OpenSea, and Axie Inifinity work on Alchemy's infrastructure.

Alchemy was founded in 2017 by Nikil Viswanathan and Joseph Lau, both graduates of Stanford University who had both previously worked in computer science and engineering at technology companies including Google, Microsoft, Facebook, Pinterest, Google, and LinkedIn, respectively. The company publicly launched in August of 2020, and has since launched a venture capital arm, Alchemy Ventures, and Web3 University, intended as an educational resource on blockchain development.

The tools provided by Alchemy for blockchain and software development have been developed for use on Ethereum, Polygon, Arbitrum, Optimism, Flow, and Crypto.org blockchains. These include tools such as APIs, suites of developer tools, dashboards, and notification tools. Using this platform, companies have been able to develop blockchain applications, such as NFTs, decentralized finance, and related projects.

Alchemy's Supernode is an Ethereum node API able to scale every piece of node functionality with dedicated distributed systems while maintaining real-time data correctness with a proprietary coordinator service. This API offers a proprietary coordinator service that works to ensure data is correct, real-time, and in sync. This is important for blockchain as each node in a blockchain has different blocks, transactions, and logs, which inevitably cause errors that can crash apps and deteriorate user experience. And it is similar to load balancers across an traditional infrastructure across a few centralized server. 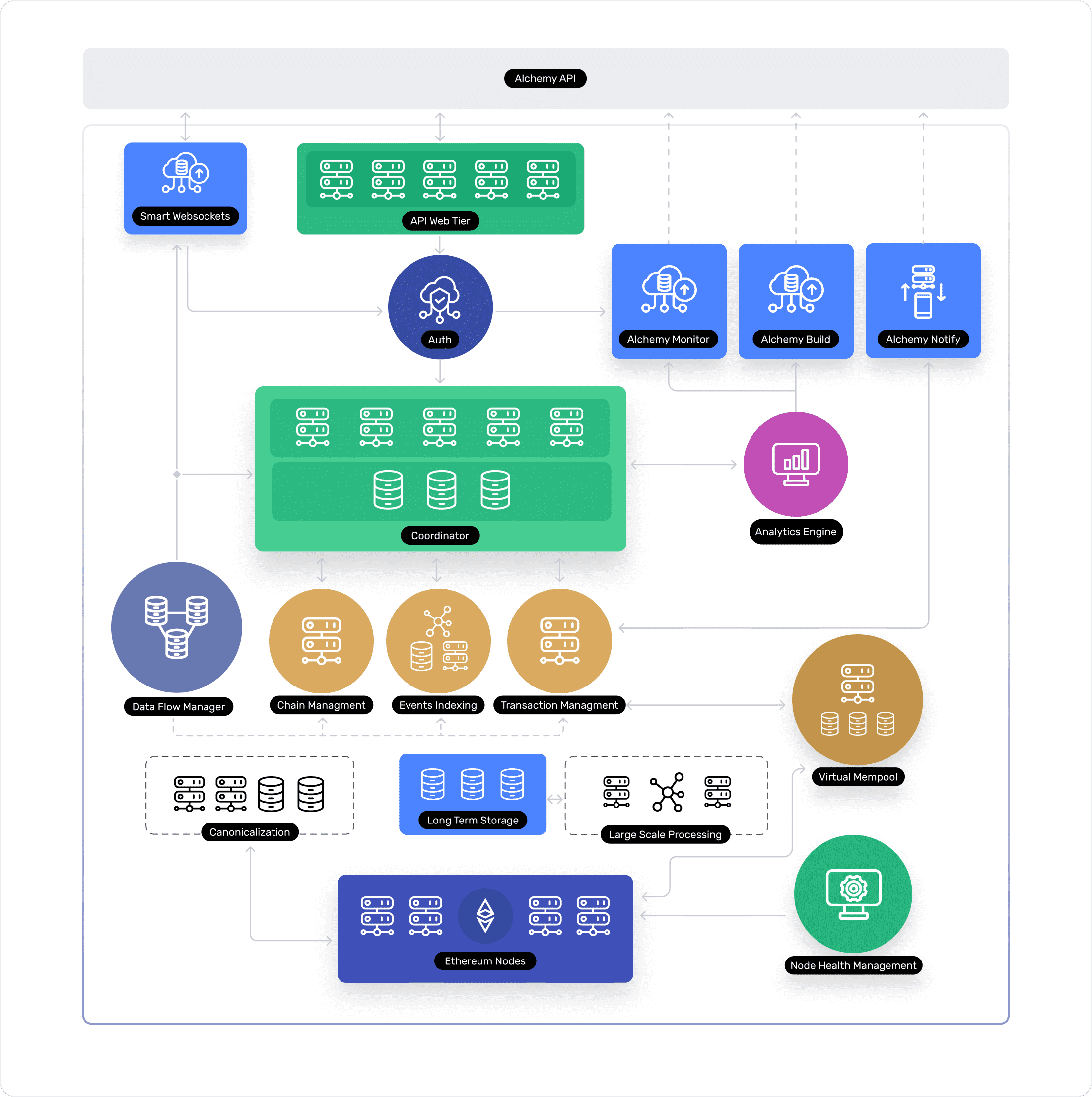 Similarly, applications that run directly on nodes tend to suffer high latency and downtime because those nodes tend to be built to be general-purpose and are not designed to be highly available. The Supernode works to power each piece of node functionality with a dedicated and distributed system similar to those used by Facebook and Amazon for achieving scale. Further, the Supernode is built to help manage the challenges of developing at scale without the user company needing to worry about maintaining that infrastructure. The tools also support unlimited requests for archive data, even on the free tier. This is to allow users to get the historical blockchain information users need, including being able to fork the entire chain from genesis. And Supernode includes enhanced API methods capable of returning block and transaction requests, smart contract event logs, and pending transactions in a virtual mempool.

Alchemy's Build includes tools for blockchain developers. It is a no-configuration, in-house suite of developer tools for prototyping, debugging, and shipping products. This includes an explorer tool, which allows users to search through millions of historical requests to find specific bugs, performance optimizations, or patterns of errors. The mempool visualizer allows users to view the real-time state of transactions in the mempool in order to identify delayed, stuck, or dropped transactions. It includes a composer tool, which allows users to make JSON-RPC calls from the dashboard to prototype and fix failing requests or explore the behavior of new methods. And it includes a debug toolkit allowing users to scan recent requests and errors and includes a real-time query visualizer to help users debug faster. 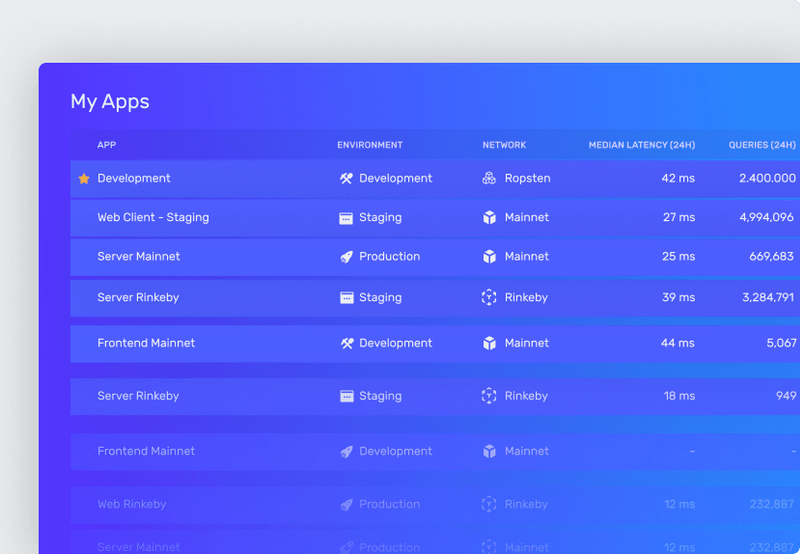 Alchemy's Monitor tool is a suite of dashboards and alerts for application health, performance, and user behavior. This includes a command center, which allows users to check on the high-level health of all applications, including the requests per second, response time, and error rates. It offers usage analytics, which explore and review specific application usage over time and compares and contrasts production and staging of two different applications, while offering a deep dive into application usage by method. This can further offer insights on user behavior with aggregated geographic, traffic, and activity data without compromising privacy or security. And, with the tool, users are offered automated alerts and digests to provide alerts when an application hits errors or otherwise needs a users attention and offers a daily report of key health metrics so users have health metrics of those applications.

Alchemy also offers a growing suite of enhanced APIs for developers, and to help increase developers efficiency. This includes APIs for receiving all data users need for transactions, token information, and debugging, while promising to do so in fewer requests. This can include transferring API data, from transaction history all the way back to genesis. And through a single API call, this can return the transaction history for a specific account or address, over any block range, instead of having to traverse the entire chain. As well, these APIs are built to provide token metadata, which through an API call can return crucial token metadata for a given contract address and give users necessary information for computing user balances and displaying token information. 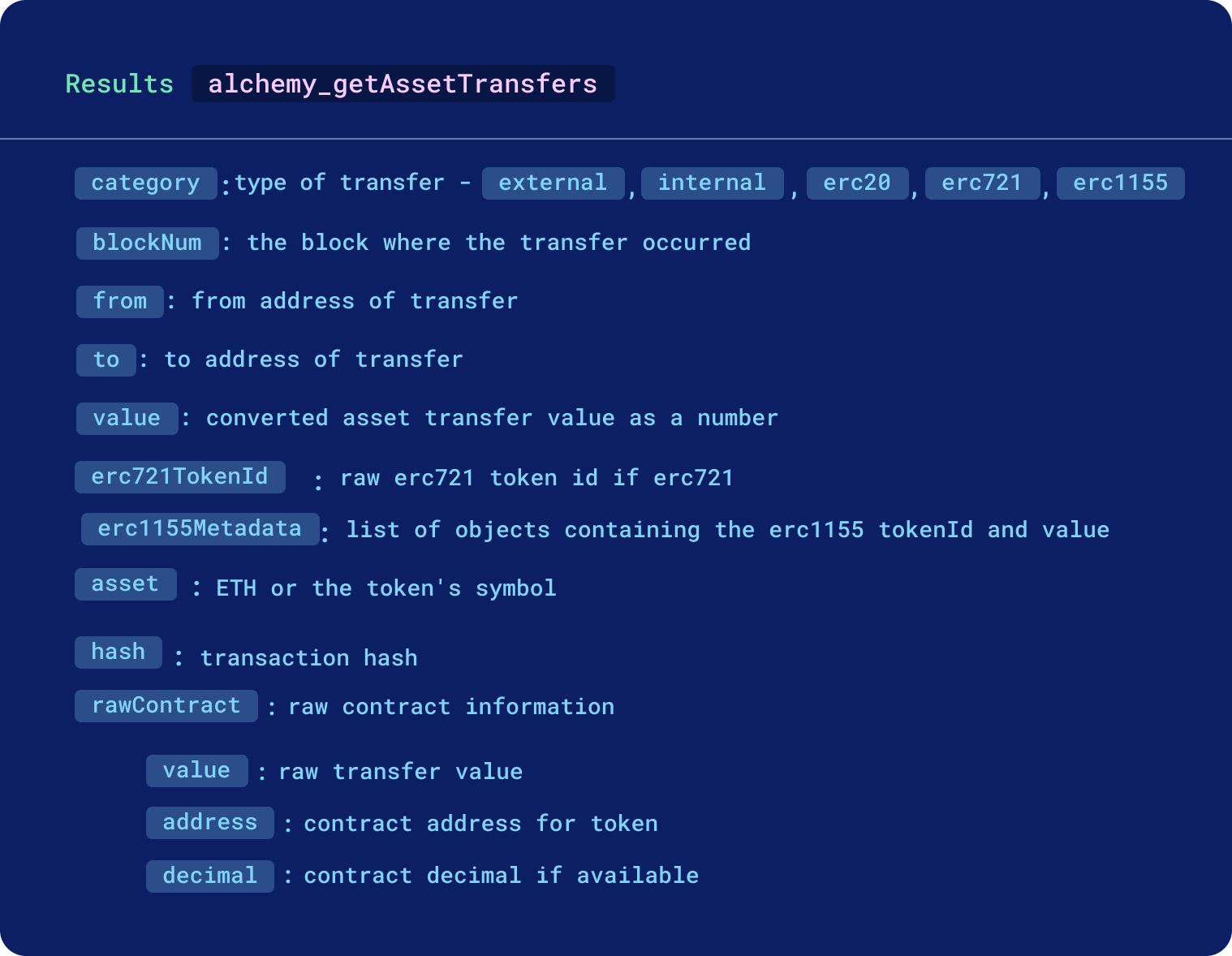 The APIs are further built to, through API calls, return token balances for a given user address and a list of token contracts; it can return the amount of a given token that a spender is allowed to withdraw from the token owner; it can provide the full transaction receipt for each transaction contained in a block; it can provide users with deeper insights into a transaction process; and it provides easier debugging as it will re-run the transaction in the manner it was executed on the network in order to replay each transaction. The Alchemy Web3 API is a drop-in replacement for web3.js, and has been built and configured to work seamlessly with Alchemy and provide multiple advantages like automatic retries.

Alchemy's Amplify is a marketing program for partners for launching a new product, intended to help partner companies allow developers and creators focus on building those products. This includes a certified infrastructure alliance, which allows companies to be associated with other names in Alchemy's customer ecosystem and provide a level of credibility for those companies. And it provides a product marketing campaign including social hype through social media, and offers those using the Amplify service a write-up in Alchemy's Supercharged newsletter, which boasts over 10,000 users and readers. Alchemy's Amplify also offers access to Alchemy's accelerator program which works to provide discounts, mentorship, and a Web3 support channel for startups.

Alchemy offers an API for NFTs, which allows users to find, verify, and display any NFT across all major blockchains. This tool has been built to help users get access to NFTs either by collection, owner, creator, etc., without needing a deeper understanding into the NFT market. This tool indexes and caches images and metadata to help users get the NFTs they want in an instant. The tool is capable of displaying NFTs from all major chains in a single, simple format. This API has been used by NFT creators such as Adobe Behance or Axie Infinity to help those other companies offer Web3 enabled experiences for their users.

The pricing of Alchemy's platform includes a free tier, which offers the basic capabilities, including the platform capabilities of Supernode, Build, Monitor, Notify, archiving data, Mainnet, Testnets, and Enhanced APIs. The free tier offers 100,000,000 compute units per month as well, and includes full support. The second tier, labeled the Growth pricing tier, includes everything from the Free tier, while also offering volume discounts, increased base rate limits for computer units per second, increased allowable applications, and offers Parity Trace and Geth Debug tools. And the final pricing tier is an Enterprise pricing tier, which includes customized functions and tools based on specific development needs.

In December 2021, Alchemy announced the company launched a venture capital arm, which had been growing in the background of Alchemy since it has already worked with FTX, Matter Labs, Arbitrum, and Genies, among others, in funding and support. The focus of Alchemy Ventures is to provide developers with the necessary building blocks to help those companies build their technology, and includes accelerating these companies through financing and resources for the Web3 ecosystem. Alchemy Ventures includes venture capital partnerships with Andreessen Horowitz, Lightspeed Venture Partners, Coatue, and Altimeter. And investments through Alchemy Ventures have included in Roll, FTX, Arbitrum, Genies, Matter Labs, and Royal.

Graphic of the Web3 University.

Announced around the same time Alchemy announced the launch of Alchemy Ventures in December 2021, Alchemy launched the Web3 University. This is intended to provide an online educational platform to bring users resources and tutorials across the blockchain development ecosystem. It offers a single place to learn about writing chain-agnostic smart contracts, mint NFTs, and build fully-functional end-to-end dApps capable of scaling. To develop the Web3 University, Alchemy has partnered with Andreessen Horowitz, Pantera Capital, Arbitrum, Polygon, Flow, OpenSea, buildspace, Chainshot, and developer advocates such as Nader Dabit, Patrick Collins, Albert Hu, and Austin Griffith to develop the lessons and materials.

The purpose of the Web3 University is, in part, organized by those who have the most at stake in the future of blockchain, and allows those to educate others about Web3. It is intended to be a community-led effort and help educate those either wading into development in blockchain and Web3 or those just interested in learning more about Web3.

'AWS for blockchain' Alchemy boosts valuation to $3.5B with $250M raise

Alchemy - A Powerful Developer Platform and API for Ethereum Apps #364

Alchemy is the $3.5 Billion Crypto Firm Investing In Its Own Clients