Mimosa Networks is a provider of broadband wireless communication services, designed to deliver 5G fixed wireless connection. The company's communication services include access to internet via wireless system and sharing of spectrum across a network. Mimosa Networks is also a developer of cloud-managed gigabit wireless technology intended to bring gigabit speeds to harder-to-reach places.

For rural wireless providers, Mimosa Networks suggests their wireless broadband solutions can support wired services to increase the overall quality of the service, or their solutions can support the provision of wireless broadband services. These networks can be used for local businesses, schools, governments, hospitals, and other community entities that rely on networks for their services and remain in rural communities.

Mimosa Networks also aims the company's products at utility providers to help them to continue to evolve existing infrastructure and support those utility providers in delivering new products and services to customers. As well, Mimosa Network suggests the company's products can help extend existing networks beyond the reach of cable networks through its wireless broadband products.

The company offers products for high-reliability point-to-point connection services delivering aggregate speeds of up to 1.5 GB per second with less than 1 millisecond of latency. These products also offer what the company calls GPS Sync technology, allowing for collocation and channel reuse. 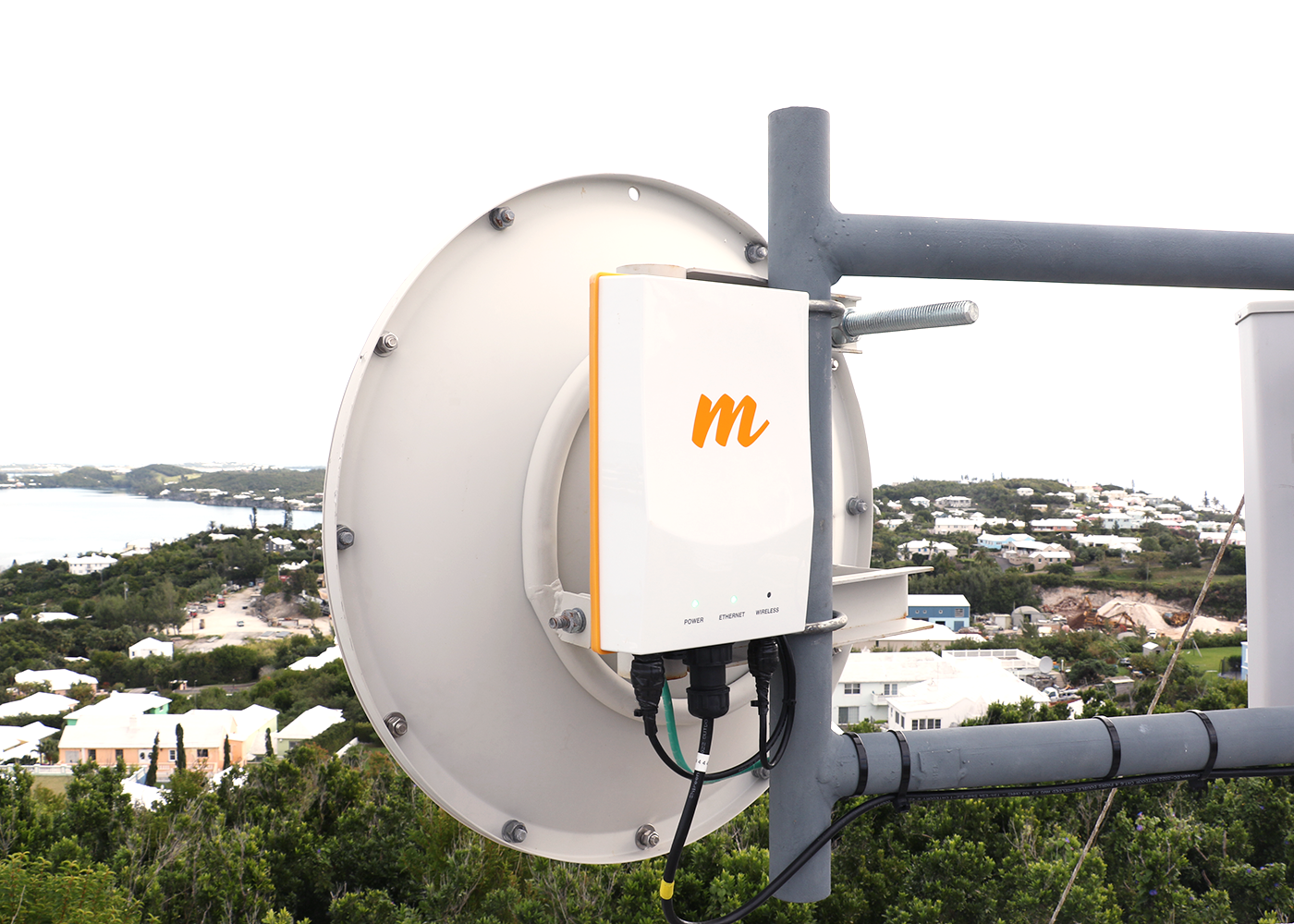 Photo of the B5c PTP device.

This backhaul device family, including the company's B5, B5c, B11, and B24 products, are designed for providing service over short-, medium-, and long-distance links and are capable of operating in licensed and unlicensed frequencies. The company says the products are designed to deliver up to 1 GB per second in a single direction and designed for modern network traffic. The products operate in the 4.9 to 6.2 GHz for the B5c radios, while the B11 can operate from 10 to 11.7 GHz where permitted. As well, the products carry a carrier-grade IP67 design, intended to represent the products' abilities to withstand extreme weather conditions. 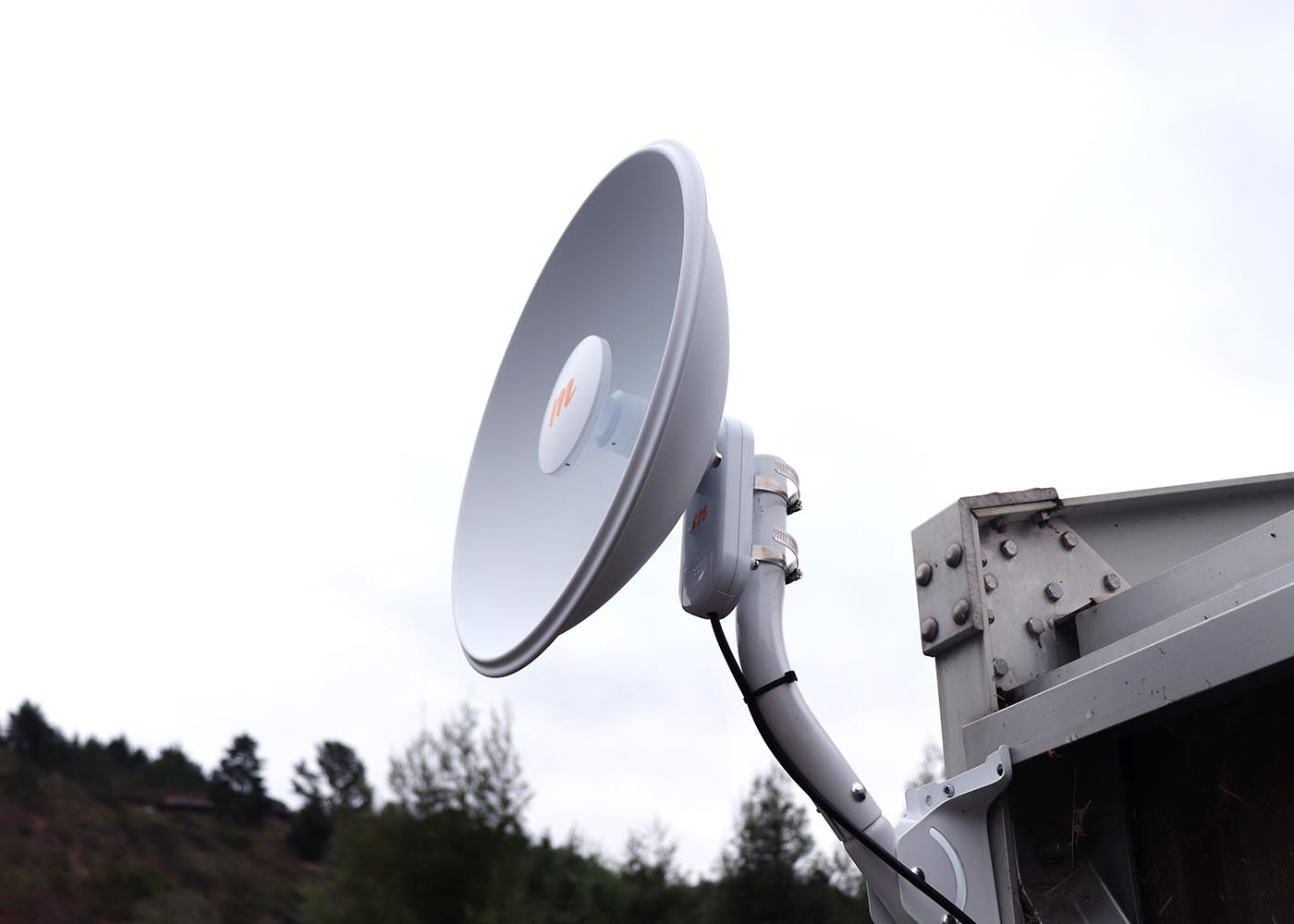 Image of the C5x device.

The company PTP backhaul product category includes extended frequency radio for up to 700 Mb per second in a rugged IP55 rated enclosure. Options include the C5x and C5c products, which the company states are capable of under 1 millisecond of latency, capable of operating in the 4.9 to 6.4 GHz range and including the Public Safety band. 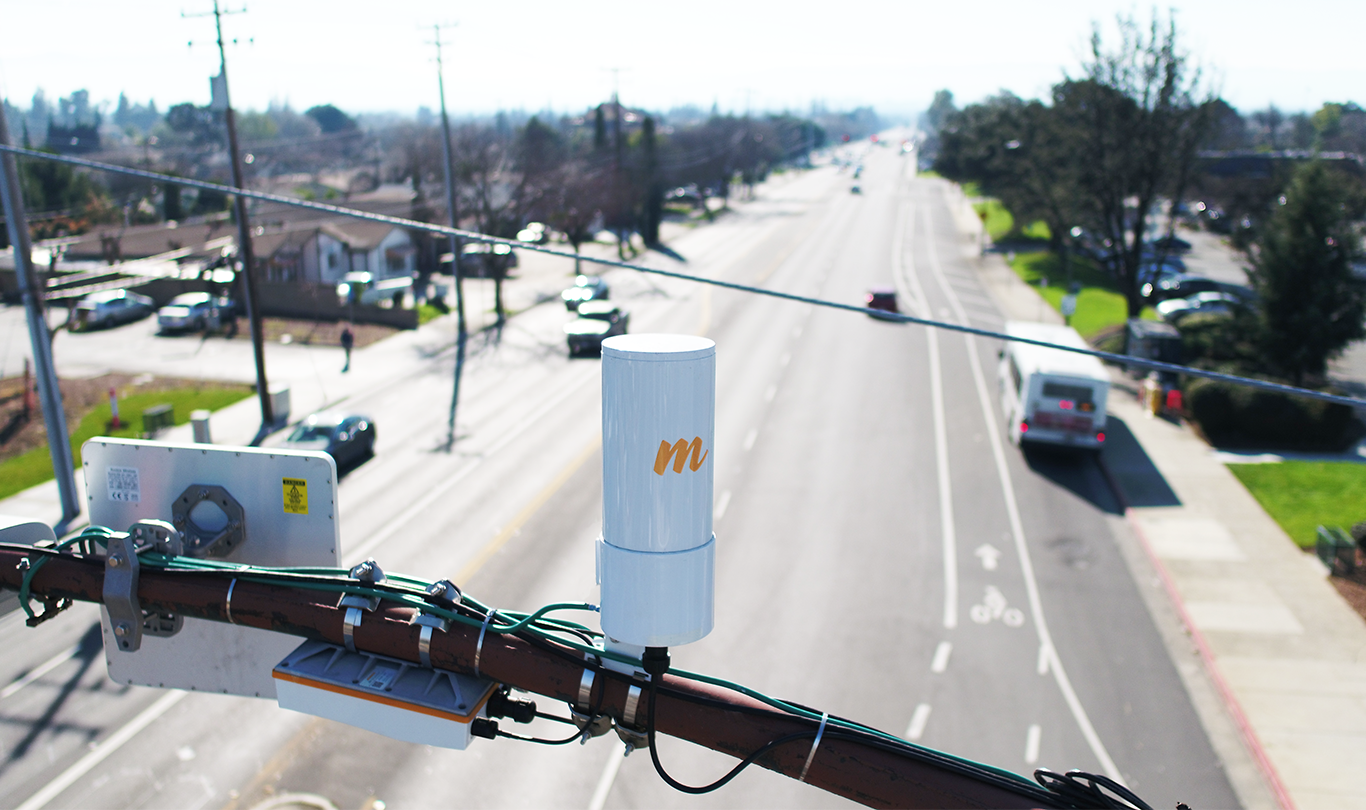 Mimosa Network's point-to-multipoint products are intended to offer fiber-optic fast speeds in fixed wireless solutions for urban, suburban, and long-distance tower applications. The company states the PTMP products, including the A5, A5c, and A5x access points, offer speeds up to 700 Mb per second with frequency support from 4.9 to 6.4 GHz, intended to offer the access points to move around the congested 5GHz band. The PTMP products can be connected to the company's PTP products and their antenna products in order to extend the range of the access point products and to offer short, medium and long range connection. 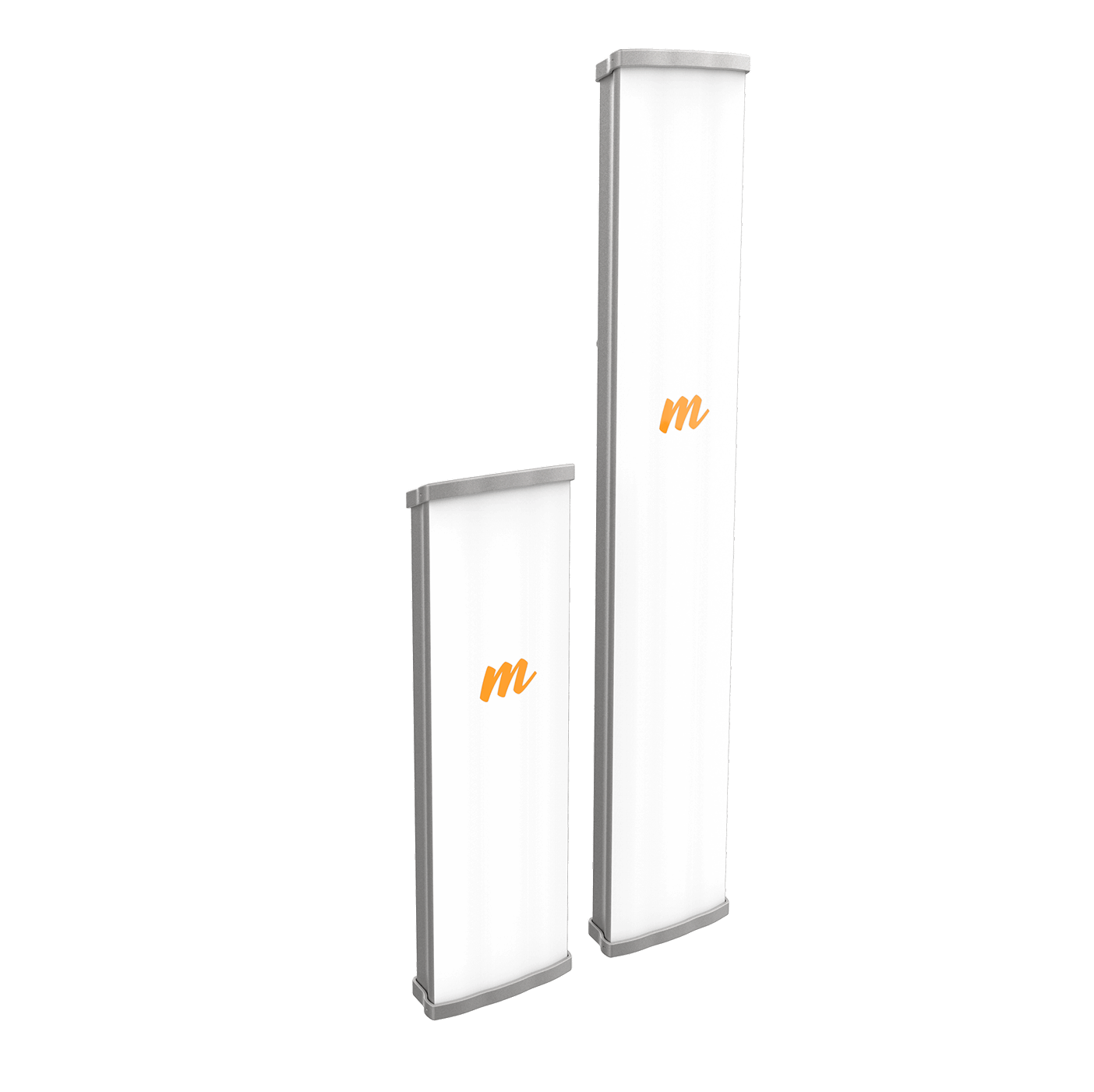 The company's N5-45 antenna is a sector antenna developed to offer 4.9-6.4 GHz wideband support and engineered for a variety of multipoint applications. The antennas are intended for use for high-speed internet access, public safety networks, fixed 5G wireless deployments, and security camera connectivity. They are also designed to deliver a high-gain, 42 degree half-power beamwidth with non-existent side lobes. And the antennas offer a 43 dB with metalized end-caps and backplates to improve noise rejection.

The N5-45 antenna can be combined into a 4 antenna grouping and coupled with Mimosa's 4x4 MIMO A5c access point to achieve a +3 dB of beamforming gain in both downlink and uplink. As well, these antenna support third-party access points to integrate with other networks. 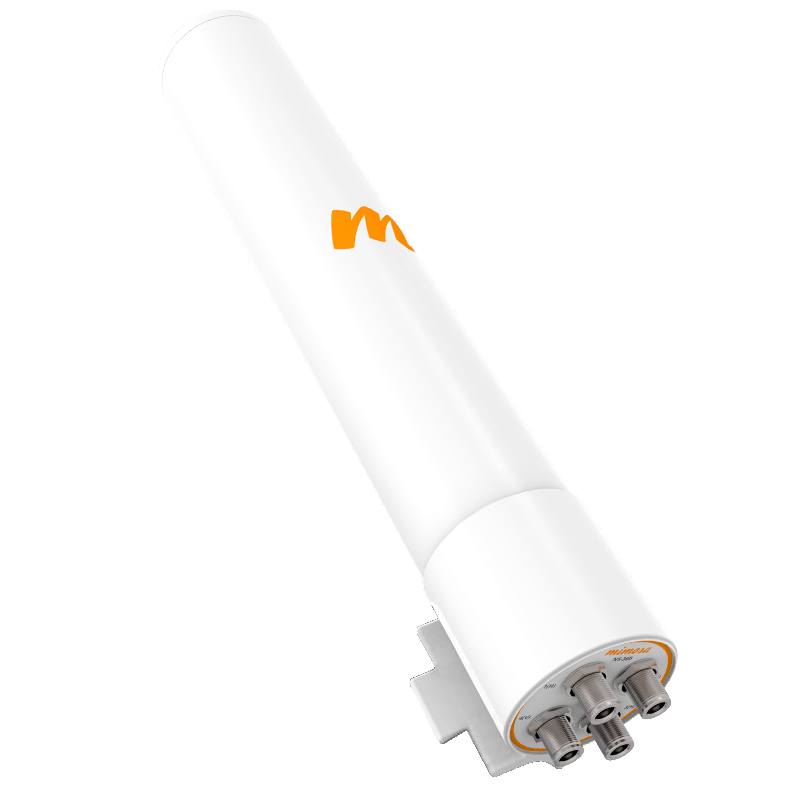 The company also offers the N5-360 antenna, a 4-port, beamforming and 360 degree antenna designed to work exclusively with Mimosa's A5c access point. The antenna's design incorporates quad-180 degree overlapping antenna polarizations, doubling the coverage of Mimosa MicroPoP deployments with 3 dB of beamforming gain. The antenna is capable of operating over a frequency range of 4.9 to 6.4 GHz and capable of supporting licensed public safety bands and other expanded frequencies. The company also states the N5-360 can double the coverage area with sixty percent longer reach for MicroPoP deployments, especially in last mile, suburban areas.