The radio spectrum is part of the electromagnetic spectrum with frequencies from 3 Hz to 3000 GHz (3 THz).

The radio spectrum is a part of the electromagnetic spectrum that ranges from 3 Hz to 3000 GHz or 3 THz. The electromagnetic waves in this spectrum, called radio waves, are widely used in technology, especially telecommunication technologies. The spectrum is divided into different frequency bands, with each band having unique characteristics and having regulatory bodies allocate those bands for specific allocations, ranging from aeronautical and maritime communication to AM and FM radio. 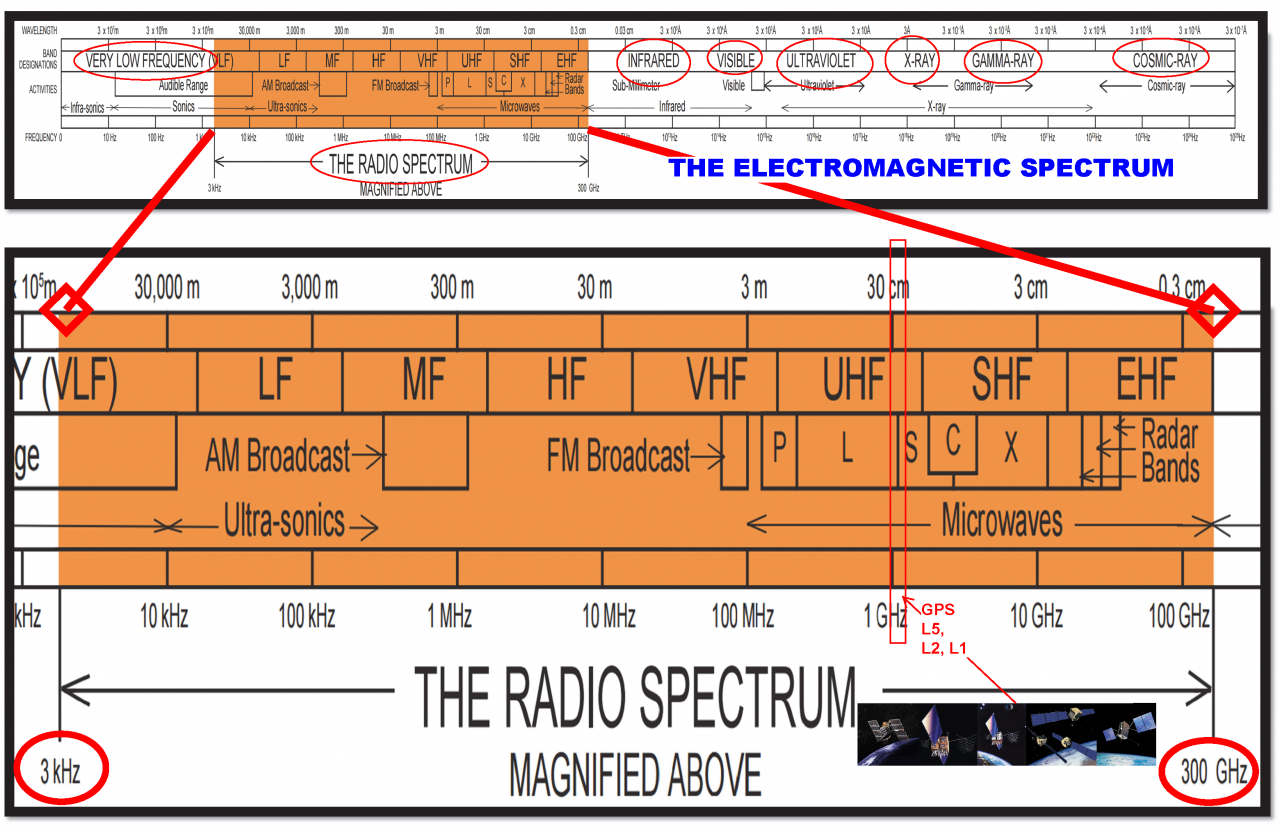 A view of where the radio spectrum sits on the electromagnetic spectrum.

The following are common applications in the radio spectrum:

A radio wave is an electromagnetic wave propagated by an antenna. The wave is set at a specific frequency, with waves having many frequencies that make up the bands of the radio spectrum. By tuning a receiver to a specific frequency, a user can pick up a signal. The antenna in radio transmission and reception is a passive device capable of converting electrical energy into radio energy that is either broadcast or received. The gain of the antenna measures how well it can amplify the signal received or transmitted. Gain is generally measured in decibels (dB), which measures quantities that can vary by large amounts.

A parabolic dish is one type of antenna commonly used for receiving satellite signals, due to its high gain. A parabolic dish is capable of reflecting radio frequency energy hitting its curved surface and concentrating that energy to a single point for a stronger resulting signal. Broadcast communications commonly use transponders. These are circuits that receive signals over one or more uplink frequencies and rebroadcast them over one or more downlink frequencies.

Radio frequency (RF) energy, similar to other parts of the electromagnetic spectrum, is identified either by its frequency (measure in Hertz or Hz) or by wavelength (measured in meters). These concepts share an inverse relationship, such that if frequency increases, wavelength decreases, and vice versa. The power or strength of a specific signal is measured in Watts.

Specific portions of the radio spectrum are known as bands. These are identified by a designation given by a name or letter. Within a band, a slice of spectrum is referred to as bandwidth. For example, if a signal is transmitted between 300 Hz to 325 Hz of spectrum, it is said to have a total of 25 Hz of bandwidth.

Bandwidth is also used to describe how much information or data can be carried by a signal within a certain timeframe, which is a function of the frequency being used, the power of the signal, and the amount of noise in the band.

Frequencies and frequency bands are regulated by national laws, and these are coordinated by the International Telecommunication Union (ITU), which is a member of the UN development group and coordinates the shared use of the radio spectrum. Their efforts include promoting cooperation in assigning satellite orbits, working to improve telecommunication infrastructure in the developing work, and assisting in the development and coordination of worldwide technical standards. Different parts of the radio spectrum are allocated by the ITU for different transmission technologies and applications, with some forty communication services defined in the ITU's radio regulations.

In the United States, the Federal Communications Commission (FCC) decides and assigns different frequencies for specific purposes, and it issues licenses to users and stations for specific frequencies. As well, the United States Institute of Electrical and Electronic Engineers (IEEE) has introduced further classifications of microwave range. These frequency bands in the microwave range are designated by letters, and this has become a widely used standard for radar bands. 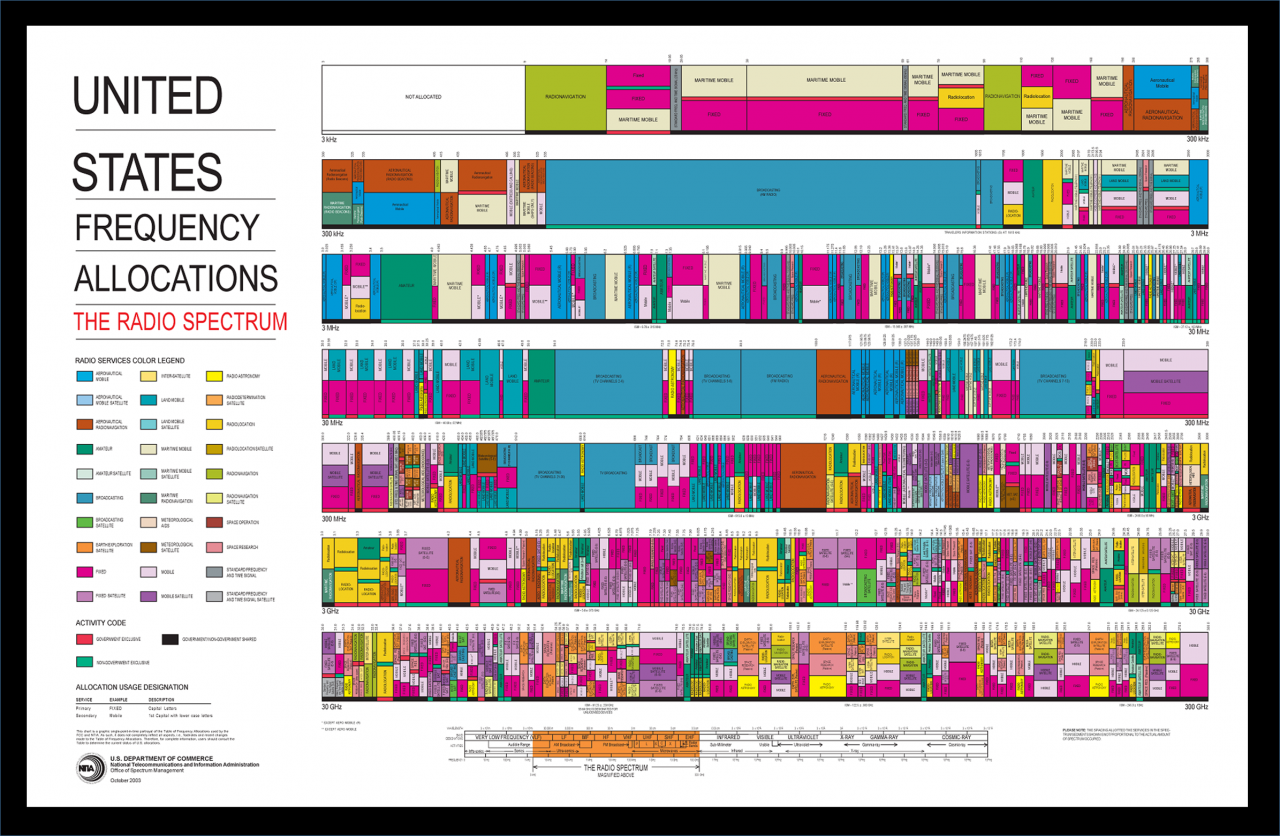 Frequency allocation for the radio spectrum in the United States.

This frequency, from 3 Hz to 3 kHz, is highly vulnerable to disturbance and can be easily distorted by atmospheric changes. It can be hard to design a system in this range because the larger wavelengths require longer antennas. Scientists tend to use this frequency band in seismic studies to understand Earth's natural activities.

This frequency band starts the range of radio frequency and practical radio transmission systems, which span from 3 kHz to 30 kHz. The design and implementation of antennas for this frequency tend to be complicated due to the size of the wavelength, and it tends to be used in submarine communications and in time radio systems, which synchronize clock signals between remote locations.

Low frequency is the range of 30 kHz to 300 kHz. One of the unique features of this frequency band is that signals are reflected by the Earth's ionosphere, making it suitable for long distance communications. These are generally called ground waves due to the long wavelength and less attenuation from big terrain like mountains. This frequency is used for information transfer when other forms of communication fail during situations such as natural disasters, and is used in military applications, for RFID and near field communication, and some low frequency radio broadcasting.

Very high frequency signals are the most commonly used bands, used in analog TV broadcasting and FM radio broadcasting between the 88 MHz to 108 MHz range; air traffic control and airline pilot communications between the 118 MHz to 137 MHz range; and private and business radio, medical equipment, and military radio applications. This frequency is typically best suited for short distance communications.

This frequency band is used most in modern wireless communication systems. It consists of many sub frequency bands, some of which are assigned for particular applications, including GPS navigation systems, satellites, pagers, Wi-Fi, Bluetooth, television broadcasting, and GSM, CDMA, and LTE mobile transmissions.

This frequency range operates in line of sight paths since any obstruction between transmitter and receiver interferes with transmission. IT is commonly used in point-to-point communications, satellite systems, digital TV broadcasting in Ku band, Wi-Fi, microwave ovens, and mobile networks. Waveguides are used for this frequency band between transmitter and antenna due to the higher losses of transmission, and this, along with the smaller wavelength, can introduce complexities into any system designed using super high frequency.

Extremely high frequency is used in advanced communication systems. This is a particularly complex frequency range that is best suited for line-of-sight applications and communications. This includes radio astronomy and remote sensing, and it has been suggested for use for high speed internet systems such as 5G due to its high bandwidth availability.

This band, also known as submillimeter band, as its waves are submillimeter waves, are used in astronomy. This band lies in the transition region between microwave and far infrared, and is regarded as either depending on application. Terahertz radiation is absorbed by gases in the atmosphere, and is attenuated to zero in the air within a few meters; therefore, it is not used for terrestrial radio communication. It can penetrate thin layers and can be used for material characterization, layer inspection, relief measurement, and as a low-energy alternative to x-rays.

How the Radio Spectrum Works

What are the spectrum band designators and bandwidths?

What is Radio Spectrum?