5G is the fifth generation of data networking hardware and data standards for mobile networks. The technology aims to deliver high-speed, low-latency data transmission and is viewed as an enabling technology for industries ranging from mobile devices to autonomous vehicle systems, augmented and virtual reality, edge computing, and the internet of things, among other application areas.

With the expected advances of 5G networks, there are advances in three areas that are expected to be major differences for 5G networks over 4G networks. This comes in the areas of connectivity, latency, and bandwidth.

Connectivity refers to the number of devices that can communicate with each other. There are already more than five billion devices connected to networks. That number is expected to reach 50 to 100 billion devices worldwide, and that connectivity is expected to increase beyond just between people and smartphones to machine-to-machine (M2M) communication and increased internet of things (IoT) scenarios in industry and residential settings. The 5G networks are intended to be able to handle those connections and more.

Latency or response time refers to how long it takes for one device to send a package of information to another across the network. With 4G, latency is about 50 milliseconds. Whereas 5G is expected to reduce how long it takes to send information via wireless transmission to about one millisecond, or one thousandth of a second. This speed could enable technologies that require faster data transfer, including a technology like driverless cars in which the car needs to be able to make split-second decisions.

Bandwidth for 5G is intended to allow for high download speeds for new applications, including 3D, 360 degree-view video streaming. As well, classroom experiences could benefit from 5G; the bandwidth increase could offer interactive and immersive virtual reality experiences for things like learning languages with virtual conversations or studying history through virtual tours of historical events.

5G is also comprised of several technology projects in communications and data center architectures that are intended to benefit telecommunication companies and customers. The majority of these efforts are in one of three categories:

Cloud-based servers could provide real-time sensory environments to a wireless user, as the connection between server and a user may need to supply as much as 5 gigabits per second of bandwidth. In addition, the compute-intensive nature of an augmented reality workload may mandate such workloads be directed to servers stationed closer to a user, in systems relatively unencumbered by similar workloads being processed by other users. As well, augmented reality and virtual reality may be better suited to small cell deployments.

The internet is not just a conduit for content, but also a facilitator of connectivity in wide-area networks (WAN). But 5G wireless offers the potential for distributing cloud computing services much closer to users than most of Amazon's, Google's, or Microsoft's hyperscale data centers. In so doing, 5G could make telecommunications into competitors with cloud providers, particularly for high-intensity, critical workloads. This could be especially useful in edge computing scenarios, such as bringing processing power forward, closer to the customer, and minimizing latencies caused by distances. If the latencies can be eliminated enough, applications that require full computers could be relocated to small devices, even mobile devices, with less processing power than the average smartphone.

With low-latency 5G connectivity, the smart devices in homes are essentially smartphone-class computers that could be replaced by dumb terminals receiving instructions from nearby edge computing systems. Kitchen appliances, climate control systems, and health monitors could all be made easier to produce and easier to control. The role played by IoT hubs, which some manufacturers produce with Wi-Fi routers, could be replaced by 5G transmitters in the neighborhood that would act as service hubs for all households in a coverage area. As well, machine-to-machine (M2M) communications offer scenarios where devices such as manufacturing robots can coordinate with one another for construction, assembly, and other tasks, under the guidance of an M2M hub at a 5G base station.

The availability of low-latency connectivity in rural areas promises the offer of greater access to critical care treatment, such as complicated surgeries, for individuals in more remote areas. As well, patients in small towns would not necessarily need to relocate to larger cities to receive the level of care they need. Instead, with 5G connectivity, caregivers in rural and remote areas are able to receive real-time instruction and support from surgeons regardless of location.

5G, as a term, is used to collectively refer to a constellation of mobile networking technologies and standards.

Previous generations of wireless technology were not stratified in terms of the their development—there was never a standard for "1G" networks; the term "2G" was credited to Finnish engineers to characterize the technological achievement of the GSM standard, but the term "2G" was also used to describe CDMA used concurrently with GSM; "3G" was the first real united standard developed by the 3rd Generation Partnership Project (3GPP); and by "4G," there were competing standards, such as WiMAX and LTE. 5G developments have been successful at keeping engineers contributing towards a single set of goals.

The standards for 5G networks have so far been defined by the International Telecommunication Union (ITU) and 3GPP.

In April 2019, the organization published Release 15, a specification for the first phase of rolling out 5G NR, an implementation of the 5G standard. In Phase 1, 5G NR and LTE share common elements, such as both using orthogonal frequency division multiplexing (OFDM).But there are differences: 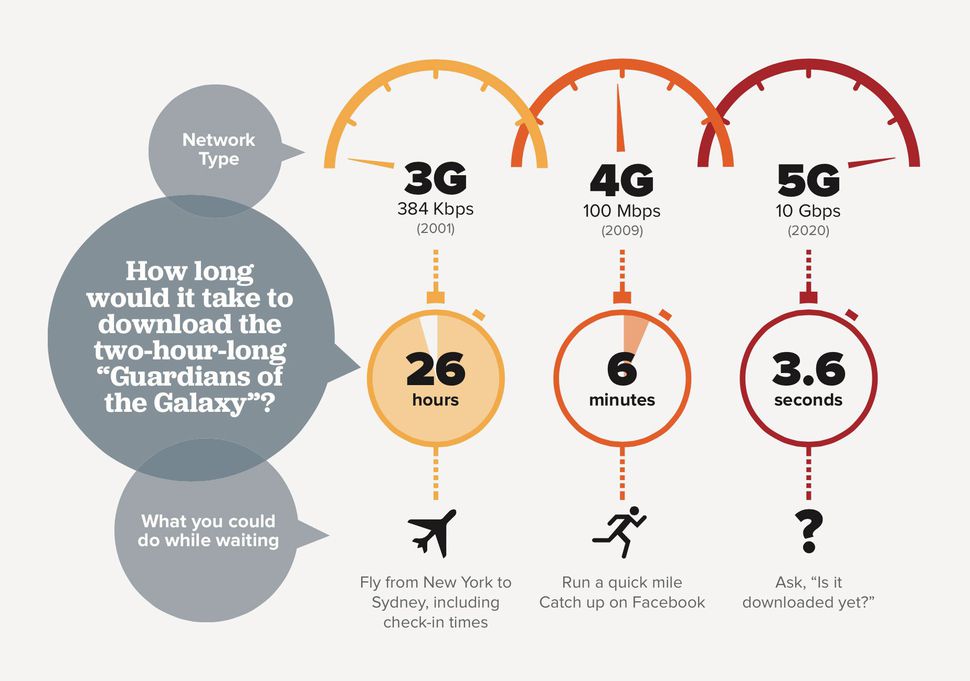 Low-band is capable of coverage in the hundreds of square miles and is described as the "blanket layer" due to its ability to also reach rural areas. It offers speeds up to 250Mpbs and is on the 600-700MHz spectrum. The spectrum was once used for analog televisions.

Middle band runs between 2-10GHz and can offer coverage up to half of a mile. It is capable of speeds up to 2Gpbs, though it is more common for speed to range from 600 to 900Mbps.

MmWave 5G covers a one-mile or lower radius and can deliver speeds from 1 to 3Gps. This is up to 80 times higher than speeds currently offered by 4G towers, which have a max speed of 175Mbps. It is also a significant improvement over standard broadband speeds in America at 18.5Mpbs. MmWave 5G will likely be limited in deployment to dense urban areas as a result of its limited range, which can be further reduced by walls and windows.

High bands have been used before for backhaul, connecting base stations to remote internet links. But they have previously not been used for consumer devices, because the handheld processing power and miniaturized antennas were not available. Millimeter-wave signals also drop off faster with distance than lower-frequency signals, and the amount of data they transfer requires more connections to the landline internet. Cellular providers will use smaller, lower-power base stations, generally outputting 2 to 10 watts, more powerful macrocells, outputting 20 to 40 watts, to offer the multi-gigabit speeds that millimeter-wave networks promise.

During the implementation of 4G networks, telecommunications companies wished there were different grades of infrastructure to support different classes of service. With the adoption of the first complete set of 5G specifications, 5G began allowing for different service grades, each of which are intended to be tuned to the requirements of customer business models. These were originally defined in the 3GPP "Release 15" in June 2018.

The classes of service defined in the June 2018 "Release 15" include:

eMBB aims to service more densely populated metropolitan centers with downlink speeds approaching 1 Gbps indoors and 300 Mbps outdoors, which could be accomplished through the installation of high-frequency millimeter-wave (mmWave) antennas throughout the urban landscape, such as on lampposts, the sides of buildings, the branches of trees, and even the tops of city buses. In more heavily populated areas, these antennas would cover an area no larger than a baseball diamond; and since most of the antennas would not be omnidirectional, with a maximum beam width of about 4 degrees, mmWave antennas would have to bounce signals off of mirrors until they reached intended customer locations. There would have to be hundreds, if not thousands, of antennas to serve densely populated areas. Whereas, in suburban and rural areas, eMBB would replace the current LTE systems with a network of lower power omnidirectional antennas providing 50 Mbps downlink service.

mMTC would enable machine-to-machine (M2M) and IoT applications that a new wave of wireless customers may come to expect from their network, without imposing burdens on other classes of service. Experts in M2M and logistics fields have previously noted that 2G service was adequate for the narrow service bands the signaling devices they used required, and that later generations degraded that service by introducing new sources of latency. mMTC would seek to restore that service level by implementing a compartmentalized service tier for devices needing downlink bandwidth as low as 100 Kbps, but with latency kept low at around 10 milliseconds.

URLLC would work to address critical needs communications where bandwidth is not as important as speed—specifically an end-to-end latency of 1 millisecond or less. This tier would address the autonomous vehicle category, where decision time for a possible accident is almost non-existent. URLLC could make 5G competitive with satellites, offering a possibility for replacing GPS for geolocation with 5G.

In July 2020, during the COVID-19 pandemic, the 3GPP organization finalized "Release 16" which included more service tier provisions for:

V2X communications would work to incorporate low-latency links between moving vehicles, especially those with autonomous driving systems and cloud data centers, enabling much of the control and maintenance software for moving vehicles to operate from within stationary, staffed, and maintained data centers.

This may include the ability for satellite transmission to fill in gaps for under-served or geographically remote areas.

This would deliver the phasing out of separate wireline service infrastructure and the deconstruction of the old telephone lines and circuit-switched networks that were the backbone of the Bell System, and other state-sanctioned monopoly service providers of the 20th century.

In Q3 2022, 3GPP is expected to formalize "Release 17" which is intended to offer further service tier definitions, as well as a roadmap for moving the radio access network to an entirely bipartite model, where control plane traffic is split from data plan traffic across the board. This enables the scenario where all-virtual components inhabit the control plane, replacing individual components and appliances with virtualized, probably containerized, functions on X86 substrates. This would be where 5G and 4G architectures formally part ways.

This release is also expected to specify whether it will be China Mobile's C-RAN architecture that brings this to fruition, or if it would open the door for O-RAN, the open-source alternative, to potentially neutralize the competitive playing field in the element of 5G infrastructure.

5G: everything you need to know