Edge computing is a form of computing for optimizing the performance of web applications and internet connected devices by completing computational processes closer to the source of data. Edge computing reduces bandwidth consumption and latency by reducing the distance of communication between clients and servers.

Edge computing is a form of computing for optimizing the performance of web applications and internet-connected devices by completing computational processes closer to the source of data. Edge computing reduces bandwidth consumption and latency by reducing the distance of communication between clients and servers. Edge computing acts to decentralize the processes of cloud computing centers because it changes the geographic distribution of where computation is taking place.

Edge computing is often discussed in relation to IoT. Moving computing services closer to the source of data, such as an IoT device, offers a range of benefits including rapidly analyzing real-time data, ideal for IoT sensors and devices.

With the rise of smart devices and more data being uploaded to the cloud a significant burden is being placed on bandwidth capacity. Edge computing offers the ability to process information locally reducing bandwidth requirements.

In theory, less data being transferred over networks reduces security needs, plus decentralizing data storage reduces the potential for a signal point of failure. Edge computing could also improve user privacy as less data is uploaded to the cloud for companies to track.

Edge computing allows users to scale their own IoT network without having to pay for costly cloud computing storage.

The beginning of decentralized computing goes back to the 1990s, when Akamai launched its content delivery network (CDN). The company introduced nodes at geographical locations closer to the end-user to better deliver cached content such as images and videos.

Emerging in 2006 with the release of Amazon's EC2 service, cloud computing has gone on to widespread adoption.

In 2009, Satyanarayanan et al. published the paper “The case for VM-based cloudlets in mobile computing” discussing the end-to-end relationship between latency and cloud computing. The paper proposed a two-level architecture consisting of the unmodified cloud infrastructure (high latency) and a dispersed element known as cloudlets (lower latency). This became the theoretical basis for many aspects that would go on to become modern edge computing.

Fog computing, also referred to as fog networking or fogging, is a closely related technology to edge computing. It describes a decentralized computing structure located between the cloud and the devices that produce data. This structure is flexible allowing users to place resources, including applications and the data they produce, in locations that enhance performance. 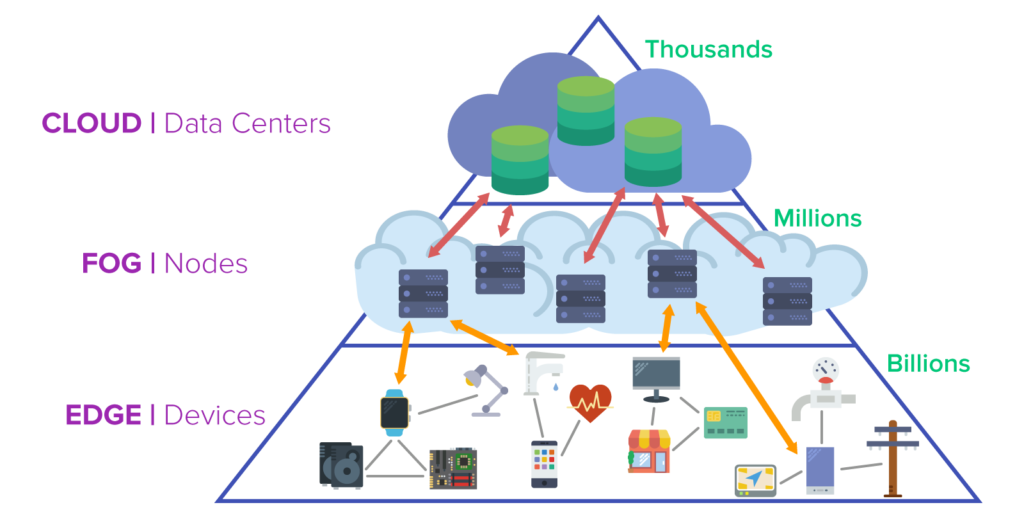 Demonstration of the cloud, fog computing, and edge computing.

With a range of benefits, edge computing has numerous use cases across industries:

The paper discusses decentralized and widely dispersed internet infrastructure components known as "Cloudlets." The paper introduced the theoretical basis for many aspects of modern edge computing.

The network introduced nodes located geographically closer to the end-user to improve operation.

Fog computing and its role in the internet of things

How AI Accelerators Are Changing The Face Of Edge Computing

The Case for VM-Based Cloudlets in Mobile Computing

What is edge computing

What is edge computing?

Beyond the Cloud: Edge Computing

Title
Author
Date
Publisher
Description
Faster access to critical data and better application performance can be a matter of life and death
Lumen Technologies
June 29, 2021
www.prnewswire.com:443
/PRNewswire/ -- When caring for patients, every second counts. Immediate access to crucial data can mean more accurate and potentially lifesaving healthcare...
Global Private Wireless Networks Market Report 2021: LTE, 5G, and Edge Computing - 5G Subscription within Private Wireless Market to Exceed Public Networks by 2030
Research and Markets
April 20, 2021
www.prnewswire.com:443
/PRNewswire/ -- The "Private Wireless Networks Market by LTE, 5G, and Edge Computing in Enterprise, Industrial, and Government Solutions 2021 - 2026" report...
Global 5G and Edge Computing Report 2020-2024: Growth Opportunities for Both Consumer and Enterprise Use Cases
Research and Markets
February 5, 2021
www.prnewswire.com:443
/PRNewswire/ -- The "5G and Edge Computing - Cloud Workloads Shifting to the Edge, Forecast to 2024" report has been added to ResearchAndMarkets.com's offering....
Telefónica launches its virtual data centre service based on edge computing in Andalusia
November 26, 2020
WebWire
, , , , • This technology provides computing and storage at the edge of the network to allow massive data processing, low latency and real-time decision-making, key factors in implementing the new 5G services and ensuring IoT massification , , • It provides ultra-fast access similar to that offered by the traditional model of deploying end users' equipment in offices, factories, shops and homes but also brings the benefits of the cloud model , , • With the deployment of the Virtual Data Centre...
Edge Compute in Smart Manufacturing: Essential for True Transformation
Brand Post
May 29, 2020
CIO
The Fourth Industrial Revolution has never been more relevant, urgent and important than it is today. Industrial and manufacturing companies must rethink their current accidental architectures and develop a new strategic smart factory direction to realize the substantial business value of digital transformation and remain competitive in the market.
SHOW MORE