Luminar Technologies is an autonomous vehicle sensor and software company developing LiDAR systems for autonomous vehicles. The company's combination of sensor and software has been developed to meet the performance, safety, and economic standards and requirements of the automotive industry. This has led to partnerships for production autonomous consumer vehicles with Volvo Cars and other partnerships with Daimler Truck AG, Tesla, and Intel's Mobileye.

Luminar's autonomous vehicle works through lidar technology designed for automobiles and high-volume manufacturing. The system uses a single 1550nm fiber laser for long-range pulse energy of 905nm, while remaining safe for human eyes. This is used in a scanner with two axis scanner mirrors with 120 degree by 30 degree field of view, which scans the laser and does not have to spin the entire lidar device.

This scanning technology is paired with a receiver, a high dynamic range InGaAs detector, and processing electronics, including a custom-built mixed-signal ASIC, which the company suggests works better than, and can be manufactured at a lower cost than ADC chips. This technology enables the detection and classification of objects out to 250 meters, from cars to lanes, and understanding "dark" objects at night that have low reflectivity.

This technology is also intended to be capable of detecting the velocity of an object in three dimensions, in order to autonomously direct a vehicle through maneuvers, especially in the cases of moving a car through a busy road or avoiding obstacles and sudden movements. Paired with the company's software, the system is also able to control regions of interest, including an automated horizon tracker. The software also gets over the air updates for growing feature sets and continuous improvement of core functionality.

Hydra is a Luminar Technologies tool set for testing and developing different and series-production capabilities. Hydra can be configured with one or multiple lidar sensors to enable autonomous driving from highway to urban driving conditions. The single sensor is considered better for consumer applications; the use of three sensors is considered useful for 360 degree field of view for applications such as trucking; and a four-sensor development is capable of a 360 degree field-of-view with redundant zones for applications such as autonomous or robotic taxis. 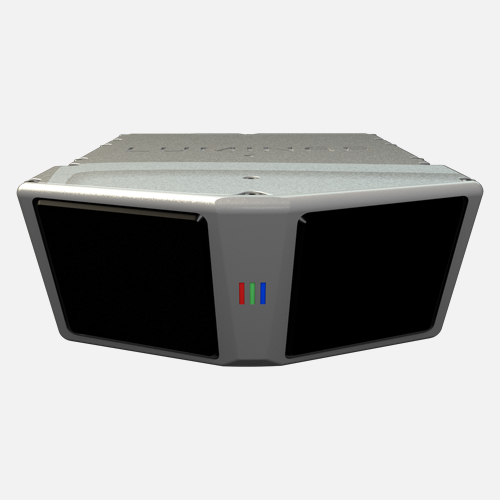 Hydra has been developed to offer camera-like resolution of up to 200 points per square degree to provide better data fidelity and reliability for the software to see and recognize objects. As well, Luminar provides updates to the Hydra system to help users develop new applications as necessary. The Hydra module has been tested for stressful environments, including freezing environments and earthquake-like environments, to ensure it can work and continue to provide autonomous driving in complicated weather and environmental conditions.

The Iris is a production-series program and lidar module expected to be included for use in automotive production, beginning in 2022. The package is intended to be low-cost for series-production of 10,000 to more than 1 million vehicles. It is configured to be a slim design intended to be mounted above a vehicle's front windshield, integrated into the vehicle's roofline, and capable of being customized for integration in other parts of vehicles. 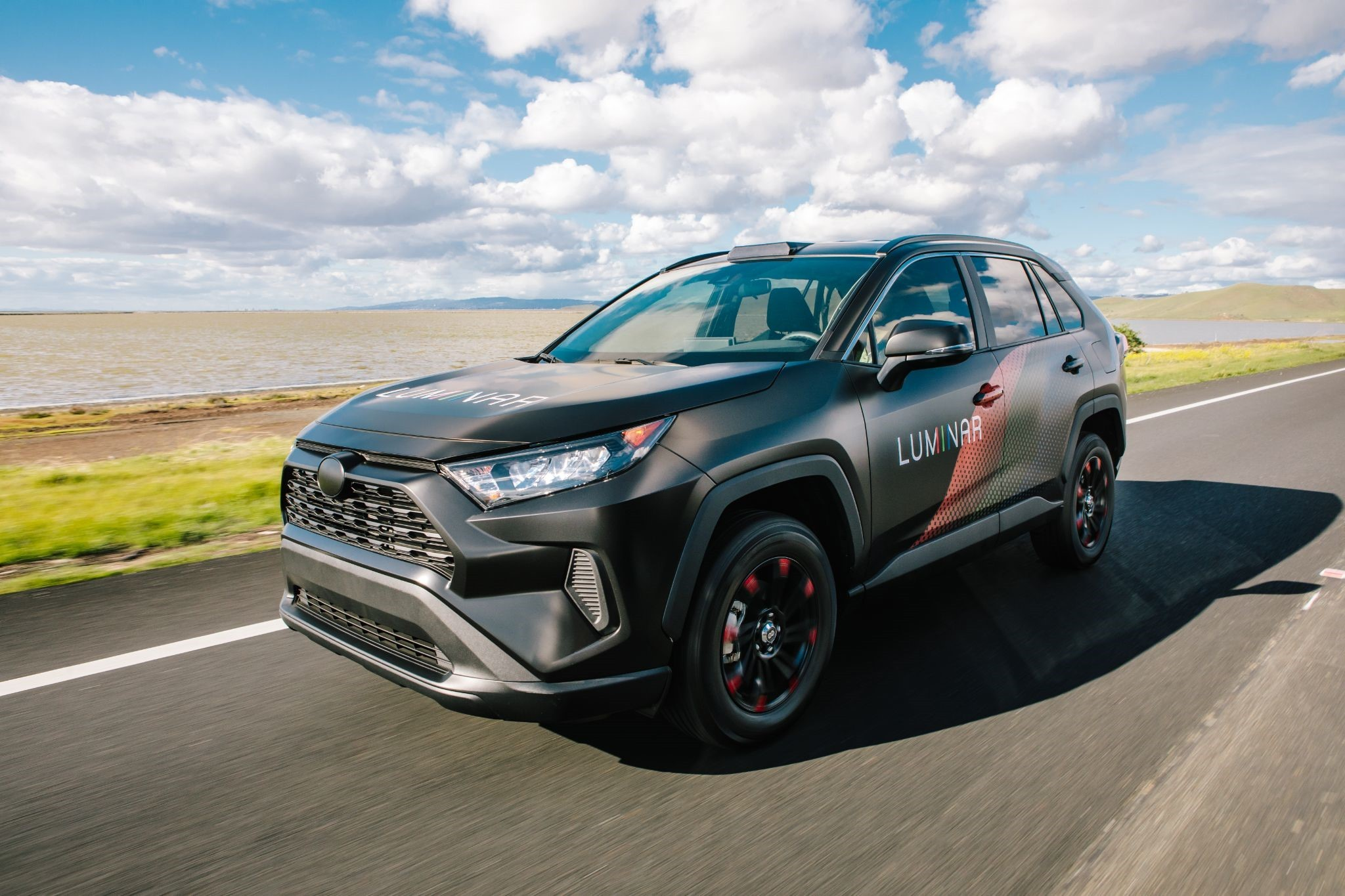 Luminar's Iris module integrated on the roofline of a production model vehicle for demonstrating its capabilities.

This production level module offers camera-like resolution for its lidar, with greater than 300 points per square degree for higher data fidelity to determine what and where objects are. The camera is paired with the system's software, which Luminar works to provide updates to in order to ensure the system continues to be better at understanding what those objects in the environment are.

Announced in June 2021, Luminar and Volvo reached a partnership to include Luminar's Iris lidar hardware and the company's Sentinel perception solution on the Volvo's fully electric successor to the XC90, expected to be presented in 2022. This comes in addition to an autonomous driving computer powered by NVIDIA's DRIVE Orin and Zenseact and Volvo software. This system is aimed to reduce fatalities and accidents as part of Volvo's safety package.

Luminar also partnered with Airbus to test the company's lidar system for automated flight. The company's other partnerships include Volvo, Daimler Trucks, and Intel's Mobileye. While those latter partnerships have included the development of production vehicles, the partnership with Airbus is not to develop a production vehicle. Instead, the partnership is focused on developing and eventually applying new technological breakthroughs in aviation. This would be a part of Airbus' Flightlab, which works to provide access to flight test platforms through Airbus' business lines, which include commercial aircraft, helicopters, defense, and space. The use of Luminar's lidar would be for use to enhance sensing, perception, and system-level capabilities for safe, autonomous flight.

As well, these partnerships complement Luminar's in-house manufacturing facility located in Orlando. This facility already engineers process and manufacturing technology and techniques for use in production with the company's manufacturing partners. The announcement included the announcement of bringing online the initial production line at Celestica's facility in Monterrey, Mexico. The facility is automotive qualified with IATF 16949 certification and is intended to produce the Iris lidar module.

With Luminar's inclusion of the Iris series in OEM partner's production consumer vehicles in late 2022, the company also debuted their Blade concept. This was debuted in June 2021, alongside the demonstration of the capabilities of the Iris module, and presented the companies vision for the use of lidar for autonomous production vehicles. This included the company's vision for the use of autonomous technology for long-range trucking, where a lidar system could allow a human operator a chance to sleep. And for use in robo-taxis, where the company suggests the use of lidar and the company's software could make taxis completely autonomous and driverless, capable of recognizing passengers versus pedestrians. The Blade design further works as a concept to design vehicles with the company's lidar systems built into the vehicle's architecture, which can be incorporated into vehicle development programs. The concept was developed in a collaboration between Luminar and NewDealDesign.

Luminar Debuts Blade, a Design Vision for Our Autonomous Future

Title
Author
Date
Publisher
Description
Volvo's flagship electric SUV will come with Luminar's lidar and software as standard
Aria Alamalhodaei
June 24, 2021
TechCrunch
Volvo Cars and Luminar Technologies are beefing up their partnership. The two companies said Thursday that Luminar's autonomous driving stack - a combination of hardware and software that includes lidar sensors and a proprietary perception system - will be standard on Volvo's forthcoming flagship electric SUV. Luminar had previously announced the production deal with Volvo [...]
Tesla is reportedly testing lidar sensors, which Elon Musk dismissed as 'expensive' and 'unnecessary'
Tim Levin
May 24, 2021
Business Insider
Elon Musk says he can deliver on his self-driving promises without lidar. Tesla is reportedly testing the technology, sources told Bloomberg.
The Station: Lyft sells its self-driving unit, Uber makes a big product push and Revel jumps into ride-hailing
Kirsten Korosec
May 3, 2021
TechCrunch
The Station is a weekly newsletter dedicated to all things transportation. Sign up here -- just click The Station -- to receive it every weekend in your inbox. Hi there, new and returning readers. This is The Station, a weekly newsletter dedicated to all the ways people and packages move (today and in the future) from [...]
Airbus taps Luminar to test how lidar could be used to make flying safer and autonomous
Kirsten Korosec
April 26, 2021
TechCrunch
Luminar Technologies is expanding its lidar business beyond automotive and into aviation through a partnership with Airbus. The collaboration with the French aerospace giant, which was announced Monday morning, marks the latest in a string of partnership announcements between Luminar and companies like Daimler, Volvo and Mobileye. Until now, these have exclusively focused on applying [...]
Tesla's top lawyer has left Elon Musk's company for a 26-year-old billionaire's self-driving startup
Grace Kay
April 21, 2021
Business Insider
In 2019, Tesla CEO Elon Musk called the technology being developed by Luminar for self-driving cars "doomed."
SHOW MORE