A remote sensing method using light in the form of pulsed laser to measure variable distance.

Light Detection and Ranging (LiDAR) is a remote sensing method that uses light in the form of pulsed laser to measure ranges or variable distances. LiDAR works much like radar or sonar which use sound or radio waves to discover something which cannot be seen. Except LiDAR uses light, in the form of lasers, which reflect back to the LiDAR device and allow that device to build a three dimensional map. LiDAR is used by geographers, atmospheric scientists, oceanographers, factory robots and self-driving cars.

In 1960, Theodore Maiman built and demonstrated the first practical laser, which was used in 1962 by MIT scientists to measure the distance between the Earth and the Moon with a reflected laser beam. In 1965, Stanford Research Institutes Ronald Collins filed a patent for the laser-radar, LiDAR, system to study Earth's atmosphere and weather. In 1969, Daniel Hickman and John Hogg published a scientific paper describing how airborne LiDAR could be used for measuring ocean depth.

In 1971 Lidar was used by Apollo 15 astronauts to map the Moon's surface. In 1974, Alan Carswell of York University in Toronto invents a laser range-finder which perfects the possibility of scanning a laser remotely to make maps. The first textbook on LiDAR was published in 1976.

In 1985, Optech, Alan Carswell's company, begins selling the Larsen-500, one of the earliest commercial LiDAR systems.

NASA brought LiDAR into space on the Space Shuttle Discovery in 1994 to study Earth's atmosphere from space in an experiment called LITE. In 2008 NASA's Phoenix Lander brought an Optech Lidar scanner to Mars to study the planet's atmosphere.

In the use cases for geographic, oceanographic or atmospheric study, LiDAR is used with a specialized GPS receiver often from an airplane or helicopter to acquire data over broad areas. In these studies, there are two types of LiDAR: topographic and bathymetric. Topographic LiDAR uses near-infrared lasers to map the land. Bathymetric Lidar uses water-penetrating green light to measure seafloor and riverbed elevations. 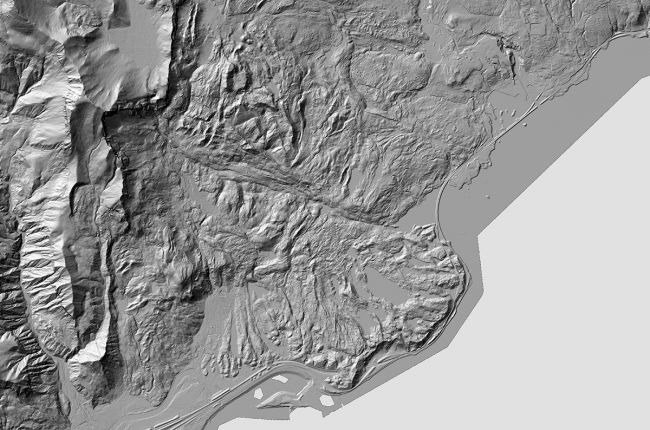 LiDAR is being used to develop autonomous vehicles, as it offers computer-friendly data in the form of exact measurements which allows the vehicle to respond the terrain around. Cameras can deliver similar detail but require machine-learning software to translate the 2D images into 3D understanding and Radar systems don't offer the necessary resolution. 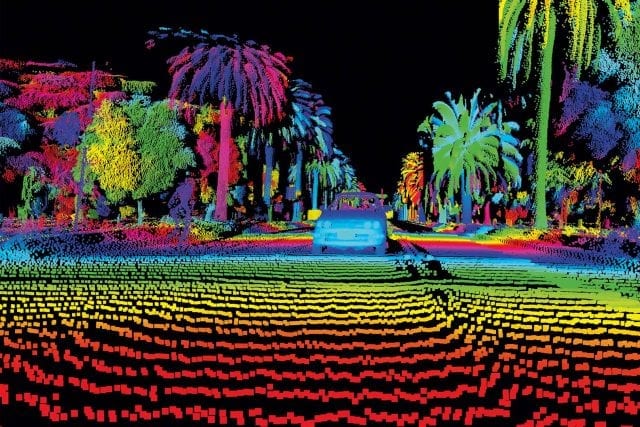 LiDAR allows vehicles to create a comprehensive 3D map of the terrain around it and an attached computer would be able to distinguish the objects from one another and respond to the difference between a truck or a child. However, LiDAR is unable to read signs and they can be disrupted in the case of limited visibility, and the current suggestion would be to use LiDAR with a camera system in those cases.

Aeva Unveils LiDAR on a Chip

Aeva says its high-performance LiDAR will sell for less than US $500; VW is buying it.

All About Lidar, The Laser-Shooting Wonder Box That Could Make Self-Driving Cars

Application of an airborne pulsed laser for near shore bathymetric measurements

How Does LiDAR Remote Sensing Work? Light Detection and Ranging

How Does LiDAR work?

Title
Author
Date
Publisher
Description
Luminar's LIDAR will take flight in new partnership with Airbus
Andrew J. Hawkins
April 26, 2021
The Verge
Luminar and Airbus will join forces to use LIDAR sensors to improve flight safety, with the goal of eventually developing fully autonomous aircraft.
3D holographic head-up display could improve road safety
Science X staff
April 26, 2021
phys.org
Researchers have developed the first LiDAR-based augmented reality head-up display for use in vehicles. Tests on a prototype version of the technology suggest that it could improve road safety by 'seeing through' objects to alert of potential hazards without distracting the driver.
3D motion tracking system could streamline vision for autonomous tech
Science X staff
April 23, 2021
phys.org
A new real-time, 3D motion tracking system developed at the University of Michigan combines transparent light detectors with advanced neural network methods to create a system that could one day replace LiDAR and cameras in autonomous technologies.
Airborne laser scanning of gaps in Amazon rainforest helps explain tree mortality
Luciana Constantino
April 13, 2021
phys.org
A group of researchers led by Brazilians has used an innovative model to map gaps in the Amazon rainforest and identify factors that contribute to tree mortality. Water stress, soil fertility, and anthropic forest degradation have the most influence on gap dynamics in the world's largest and most biodiverse tropical rainforest, according to an article on the study published in Scientific Reports.
HANNOVER MESSE 2021: Hypersen Unveils Its 3D Solid-state LiDAR, 6-Axis Force Torque Sensor and Other Sensors on the Exhibition
Hypersen Technologies
April 12, 2021
www.prnewswire.com:443
/PRNewswire/ -- From April 12th to 16th, Hypersen Technologies is attending Hannover Messe 2021 Digital Edition. Hypersen is showcasing its intelligent optical...
SHOW MORE