Patreon is a San Francisco-based crowdfunding platform for artists and creators founded by Jack Conte and Sam Yam in 2013.

Patreon is a developer of a patronage platform designed to monetize the creator's work through a direct relationship with their fans. The company's platform connects artists with their fans in order to facilitate monetary support in exchange for exclusive benefits, community, and insight into the creative process. Patreon is often used by YouTube videographers, webcomic artists, writers, game developers, podcasters, and other creators. Through Patreon, these users can make a salary where they otherwise may be unable to do so.

Patreon was co-founded in May 2013 by Sam Yam and musician Jack Conte. Patreon signed more than 125,000 patrons in their first eighteen months and announced, in late 2014, that patrons were sending over $1,000,000 per month to the site's content creators.

Patreon creators are able to control prices for different membership levels to charge their patrons. The creators are able to decide what members can receive for different pricing tiers. The tiers can range anywhere from 1$ a month to $100 a month. Patreon handles the transaction processing, which is a monthly recurring fee. The larger a patron's contribution, generally the more perks they receive. The higher rewards can include physical merchandise, having their name in content, or the ability to communicate with the creator directly. Other members also provide the same perks to all levels as part of a "pay-what-you-want' scheme. Typically, Patreon members display monetary goals on their page with specific targets for special content or increased posting frequency.

As well, Patreon members can communicate with their patrons through a feed on their page. Communications can include text, images, videos, and polls on the page as a direct line to their patrons. These can also be blocked off to specific tiers. For podcasters, Patreon offers a custom RSS feed support, which patrons obtain when they add the podcasting app of their choice.

Patreon has also included an integration with the Discord, in which Patreon members can create an exclusive Discord server or channel to chat with their fans.

Patreon's business model has developed over time. The platform was originally a marketplace for connecting fans and creators, and charged a fee to creators that was 10% of revenues divided into a 5% platform fee and a 5% payment processing fee.

In 2019, Patreon introduced a new membership schema, which introduced the Patreon Lite, Pro, and Premium plans that introduced scaled fees. In Patreon Lite, the user pays a 5% fee of income earned on Patreon for the simple tools of having a hosted page, Patreon's communication tools, and Patreon workshops. In the Patreon Pro plan an 8% fee is charged on all income and offers unlimited app integrations, analytics, priority customer support, special offers promo tools, and other add-ons. And Patreon introduced their Premium plan, which charges a 12% fee on income and offers all of the same features as the Pro but includes new offerings such as team accounts, which gives multiple people access to the same account, which would be useful for smaller media companies or creative studios. 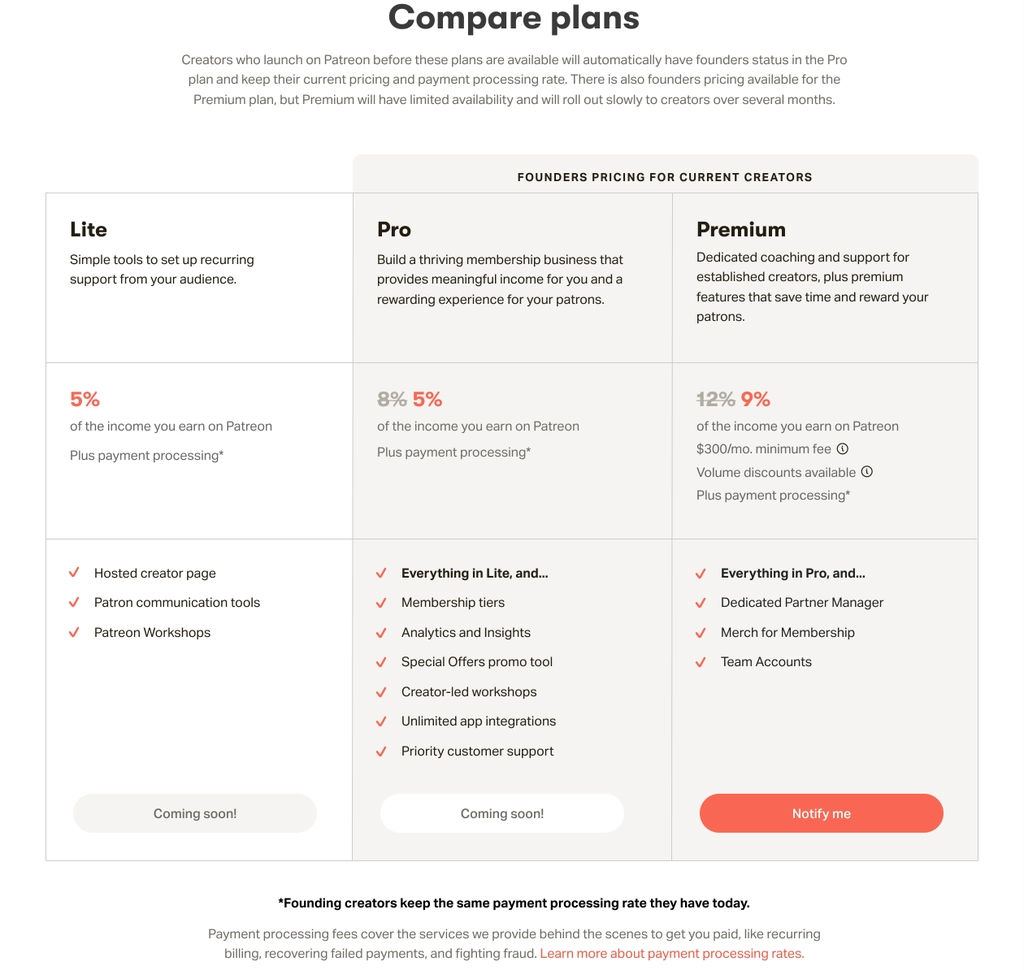 The change in the platform business model came after CEO Jack Conte suggested in interviews in early 2019 that the company's business model (which was the flat 5% income fee and 5% transaction processing fee) was not capable of maintaining the company's profitability as it grew.

The business of Patreon

What Is Patreon, and How Does It Work?

Title
Author
Date
Publisher
Description
BetaKit Live: The Future of Work on August 31st
Douglas Soltys
August 25, 2021
BetaKit
People leaders from Bright + Early, Mejuri, and Clio join BetaKit to discuss the new office work dynamic caused by the COVID-19 pandemic.
OnlyFans' explicit content ban should spark a conversation about a creators' bill of rights
Ram Iyer
August 23, 2021
TechCrunch
OnlyFans' decision to ban sexually explicit content is reigniting an important and overlooked conversation around tech companies, content guidelines and sex work.
IT professionals finally coming back to Silicon Valley. Check out pics here
July 3, 2021
mint
Silicon Valley should be one of the first places to spring back to life as the pandemic eases in the US
TikTok, Cameo and Clubhouse psychics are in high demand
Brian Contreras
July 1, 2021
Los Angeles Times
From TikTok tarot to remote reiki, COVID-19 drove mediums, psychics and other "spirit workers" online.
Dear economy, creators aren't fragile plants
Natasha Mascarenhas
June 30, 2021
TechCrunch
Hello and welcome back to Equity, TechCrunch's venture capital-focused podcast, where we unpack the numbers behind the headlines. For this week's deep dive, Alex and Natasha brought on Alexis Gay, a former operator at Patreon who now makes her living as comedian and podcast host, to talk about the creator economy -- including our disdain for that horrid phrasing. You [...]
SHOW MORE