Future Meat Technologies is an Israeli startup opened up in 2017 by Dr. Yaakov Nahmias, the co-founder of another animal-free meat startup known as SuperMeat. Following the initial success of SuperMeat, Dr. Nahmias decided to branch out and begin his own independent startup that aimed to expand the accessibility to cell-based meat products in order to meet more local and even individual needs. It recently received over $2 million, funded in part by a collaborative grant between Israel and China and in collaboration with Israel's Modern Agriculture Foundation, and several other companies including chicken production giant Tyson Foods.

While there has been an interest in animal free meat products since the late 19th century, the major push for lab-grown meat came from NASA, in collaboration with Dutch researchers. NASA was interested in whether long term astronauts could grow meat products, rather than developing ways to transport and preserve sufficient amounts of meat to sustain astronauts on long tours in space. Their persistence and financial support led the way to the first peer-reviewed studies on meat culture, published in 2005, introducing new bioreactor techniques that carried studies of in vitro meat into the 21st century. One of their techniques would use thin, reusable polymer scaffolds to culture meat by seeding it with cells from a living animal. The other used a similar technique, but instead of a scaffold, it uses small edible beads that stretch with changes in temperature. These techniques marked the beginning of the great expansion of in vitro meat technologies of the 21st century.

Animal-derived meat products are a central part of diets around the world. People in more developed countries like the United States eat about 210 pounds of meat per year, while people in developing countries eat about 66 pounds annually, but that figure is rising. This growth in meat consumption is due, in part, to the decreasing cost of meat, however, this comes with consequences, including poorer animal welfare, antibiotic resistance and deforestation, and other negative environmental impacts.

Research suggests that using cultured meat rather than conventional meat would result in a reduced environmental impact, making it much more sustainable for the growing population. Other studies take into account the fiscal cost of animal meat consumption by comparing meat-based and plant-based diets. These studies estimate that if current trends of meat consumption continue, it could cost the United States between $197 billion and $289 billion per year by 2050. While it is difficult to say when cultured meat will be competitively priced with animal-derived meat, and although the cost is still substantial, it has come down significantly in the past few years, and is expected to continue this trend as the technology improves. 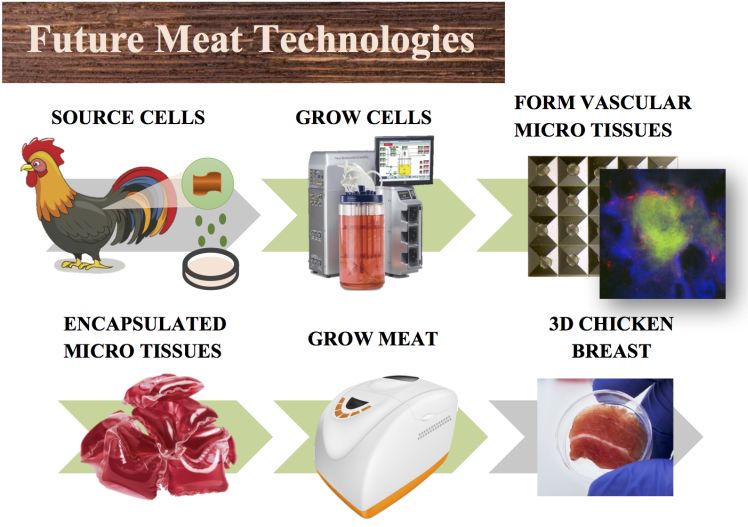 The process from the point of capsule to piece of meat takes just 10-18 days. Dr. Nahmias compares this model to sending out proprietary seeds to farmers, and claims that his company is the only one with “a GMO-free, unlimited cell source capable of differentiating to both muscle and fat, growing in an ​[animal] serum-free, antibiotic free cultured medium.”

As previously mentioned, the current cost of the process to generate animal free meat products is generally understood to be too expensive for general consumption. The Dutch government has invested $2.4 million alone in a project that would cultivate pork from stem cells. However, Dr. Nahmias is optimistic about cost accessibility as the technology develops. The Future Meat Technologies capsule design mimics animal physiology using a dialysis circuit to recirculate the culture medium, eliminating ammonia and reducing consumable costs. Nahmias predicts that each production unit will ultimately cost around $300, and will be capable of producing clean meat for around $5 per kilogram.

Systems and methods for growing cells in vitro

Title
Author
Date
Publisher
Description
Lab-grown meat could be on store shelves by 2022, thanks to Future Meat Technologies
Jonathan Shieber
October 10, 2019
TechCrunch
Are consumers ready for meat grown in a lab? Companies like Memphis Meats, Aleph Farms, Higher Steaks, Mosa Meat and Meatable are all trying to bring to supermarkets around the world meat made from cultivated animal cells, but the problem has always been the cost. Now, Future Meat Technologies has raised $14 million in new [...]
Israeli startups join firms making lab-grown 'clean meat'
By ILAN BEN ZION
February 25, 2019
AP NEWS
NES ZIONA, Israel (AP) -- Several Israeli start-ups have joined a handful of companies around the globe trying to develop lab-grown meat, something they see as a solution to the needs of the...