Israel is a country in western Asia

The Israeli government is a Parliamentary system, consisting of the legislative, executive, and judicial systems. Its institutions are the presidency, the Knesset (parliament), the government (cabinet of ministers) and the judiciary. 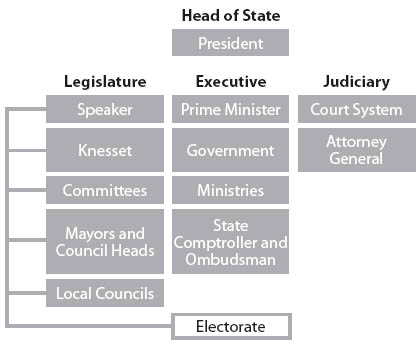 The political structure of Israel

During elections, people vote for parties and parties receive seats based on what percent of the popular vote they receive. As of 2019, the cutoff for a party to receive seats in the government was 3.25%. After an election, the parties negotiate with each other to form a coalition of parties with a majority of the seats. Once a coalition is formed, the parties in the coalition choose a prime minister. To date, all governments have been based on coalitions of several parties, since no party has received enough Knesset seats to be able to form a government by itself.

Gaza militants fire rockets at Jerusalem, and Israel responds with airstrikes; this follows a morning police raid on the Aqsa Mosque, one of Islam’s holiest sites, that left hundreds of Palestinians and a score of police officers wounded, capping weeks of unrest in the city.
Israel’s first fully digital bank selects Bloomberg as their primary data provider.
Pfizer-BioNTech's COVID-19 vaccine was 93% effective at protecting against COVID-19, a leading Israeli healthcare provider announced Thursday.
A peace agreement, known as the Abraham Accord, is reached between Israel and United Arab Emirates.
The second Lebanon War breaks out, after the 2006 Hezbollah cross-boarder raid.
The Lebanon War takes place, when an estimated 60,000 Israeli troops invade Lebanon, launching "Operation Peace for Galilee."
The Six-Day War, or Third Arab-Israeli War, takes place, during which Israel captures the Sinai Peninsula, Gaza Strip, West Bank, Old City of Jerusalem, and Golan Heights.
The Arab-Israeli war takes place, when five Arab nations invade territory in the former Palestinian mandate immediately following the announcement of the independence of the state of Israel.
David Ben-Gurion, the head of the Jewish Agency, proclaimes the establishment of the state of Israel.