Cultured meats are animal flesh products made from extracted animal cells that are grown in bioreactors and harvested for consumption. Cells are taken from animals such as a chickens, cows, or tuna, and grown using scaffolding and/or self-organizing constructs in bioreactors.

Cultured meats are animal flesh products made from extracted animal cells that are grown in bioreactors and harvested for consumption. Cells are taken from animals such as a chickens, cows, or tuna, and grown using scaffolding and/or self-organizing constructs in bioreactors.

The first known experiment investigating the potential of culturing meat in bioreactors was in 1912 at the Rockefeller Institute in New York City. The French surgeon and biologist Dr. Alexis Carrel began experimenting with embryonic heart muscle cells taken from a baby chick. Carrel was able to make the cells live 34 years (1946) until a scientist working in his lab forgot to feed the cultured cells. The cells were able to survive outside of the chick because Carrel was able to constantly supply the cells with growth medium (energy and nutrients) and constantly remove waste products. 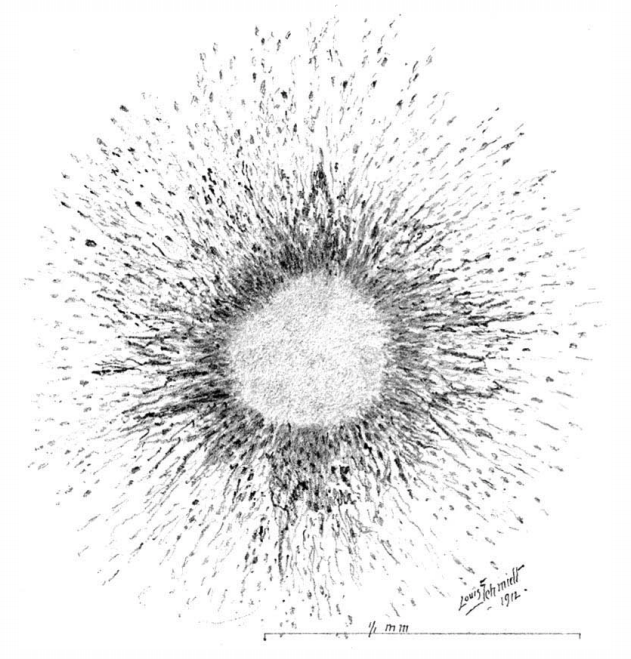 Carrels success culturing cells made him hopeful for creating immortal in-vitro cell lines and wrote "These facts show that experiments made with these or with more perfect techniques and followed over long periods of time may lead to the solution of the problem of permanent life of tissues in-vitro, and give important information on the characters acquired by tissues liberated from the control of the organism from which they were derived." Carrel dreamed of becoming famous for creating the world's first immortal cell strain and his research played an important role in the development of theories regarding cellular aging.

Later experiments confirmed that cells in culture do have a limited lifespan, and embryonic chick fibroblasts can undergo around 30 doublings (4 months) before dying. This in stark contrast to Carrells culturing experiments with embryonic chick heart muscle cells which survived for 34 years. This is in direct conflict with the Hayflick limit. There are 3 unconfirmed theories regarding the "immortal cells" cultured by Alexis Carrel at the Rockefeller Institute during this time. (1) The cultured chick cells underwent a infinite growth transformation allowing them to grow indefinitely. (2) Carrell accidentally replenished his cultured cells with new cells coming from the chick embryo extract he was including in his growth medium. (3) Deliberate addition of fresh tissues.

On December 5, 2002 NASA published a research paper titled "In Vitro Edible Muscle Protein Production system (MPPS): Stage 1, Fish". The goal of this study was to build a culturing meat system that would give astronauts a viable and sustainable source of protein for long term space travel. In this study, NASA cultured the adult dorsal abdominal skeletal muscle of Gold Fish (Carassius auratus). NASA chose to culture mature skeletal muscle explants because the explants taken from the gold fish had all the tissue types present that are commonly recognized as food. 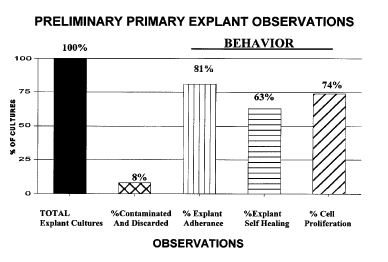 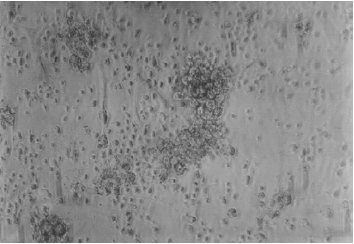 Before this experiment, tissues were typically cultured from embryonic myoblast cells. Embryonic myoblast cells are difficult to successfully culture into meat products, due to the highly differentiated nature of skeletal muscle tissues. NASA found success culturing muscle explants in this study because their muscle protein production system (MPPS) was better at mimicking in-vivo conditions —conditions muscle tissues experience in the animal organism — leading to healthy cell proliferation and differentiation/un-differentiation and ultimately a cultured fish fillet. 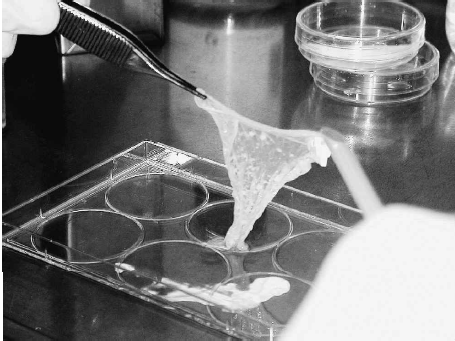 Oron Catts began the Tissue Culture & Art project in 1996 in hopes of exploring technologies and questions originating from creating tissues, semi-living objects, and sculptures using cellular agricultural techniques. The Tissue Culture & Art Project focused on the artistic manipulation of biological and chemical tools of modern science for the creation of cultured art projects. Catts began manipulating the growth and three-dimensional formation of tissues on tissue scaffolds in hopes of creating a system for artists to explore what's possible with tissue culturing technologies. 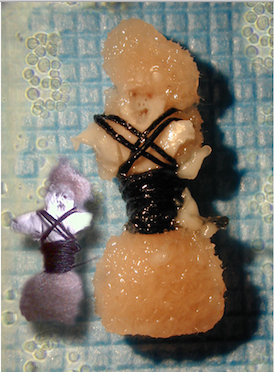 The Tissue Culture Arts Project was the first attempt to expand cellular agriculture and tissue engineering beyond medical applications. Catts and his team were able to make tissue engineered sculptures by obtaining cell lines or primary cells, seeding them on scaffolds, and culturing them.

The most famous sculpture to come out of the Tissue Culture Arts Project was the semi living worry dolls. The project was made to bring attention to anxieties people feel about corporate biotechnology and eugenics. The worry dolls were cultured in inside of an "artificial womb" bioreactor designed by Oran Catts and Ionat Zurr. The artificial womb provided micro-gravitational conditions and acted as a surrogate body for tissues growth. The artificial womb had hand-crafted bio-degradable polymers that degraded as the tissues grew. Throughout the growing process tissues were sewn together using surgical sutures to assist the worry dolls growing into their final form. 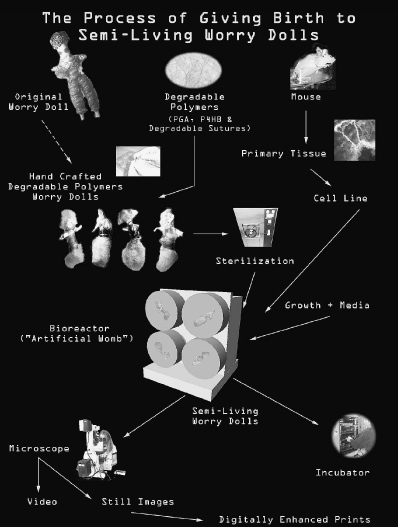 Visual diagram published by Oran Catts and Ionat Zurr on how they made the semi-living worry doll. 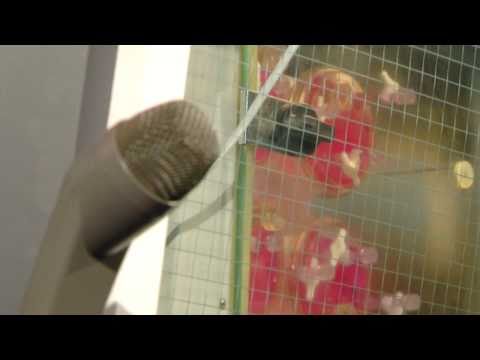 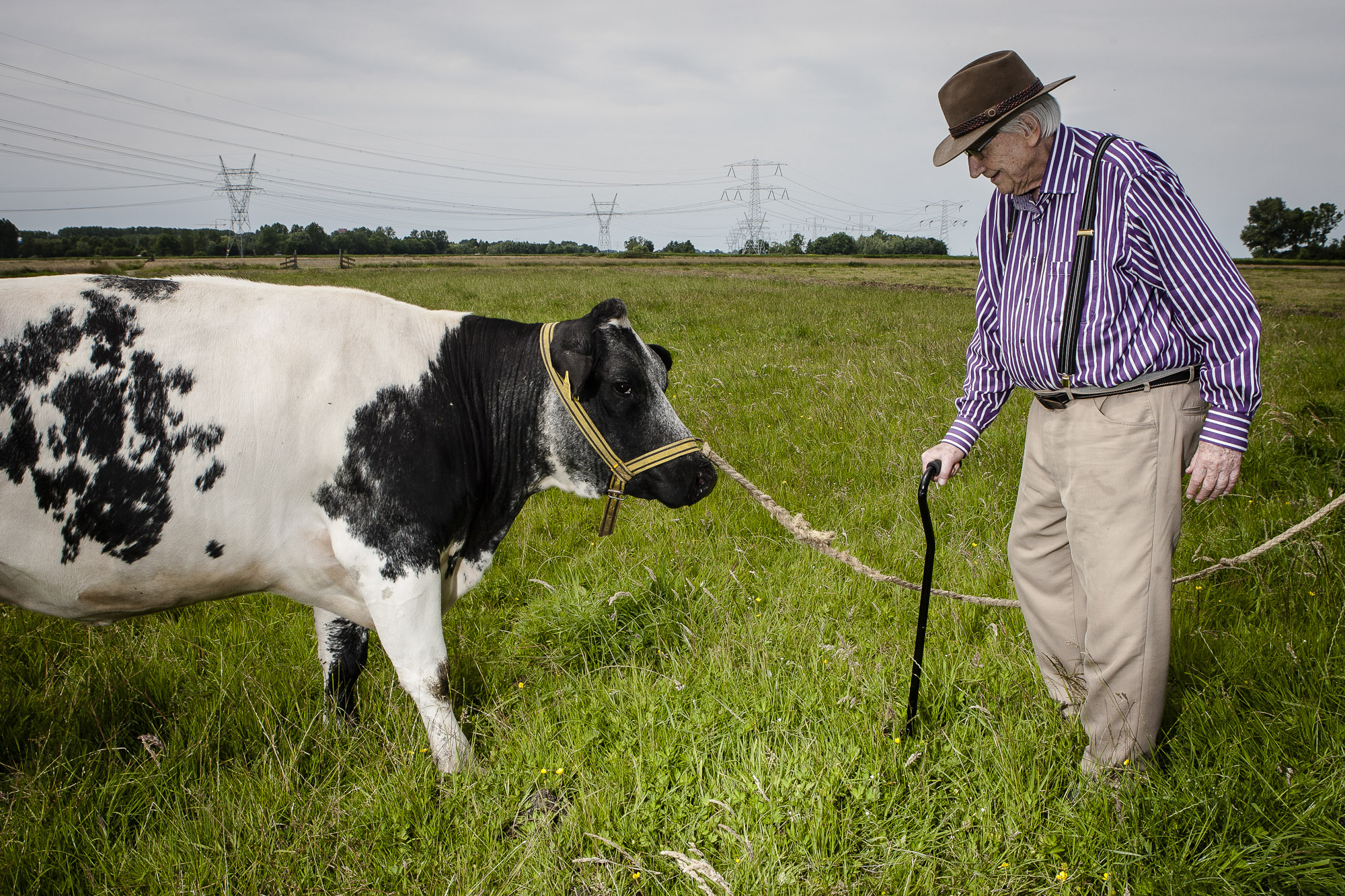 Photo of William Frederick van Eelen with a cow in the Netherlands.

Willem Frederick van Eelen is often referred to as the "Godfather" of cultured meat. He pioneered many new processes and technologies for growing cultured meat, including being granted the first cultured meat patent in 1999 titled "Industrial production of meat from in vitro cell cultures".

The co-founder of google, Sergey Brin, funded the development of the worlds first commercial cultured meat product. The product was a cultured beef burger made by Dr.Mark Post and his team at Maastricht University. The cultured beef burger sold for $330,000 , was cooked by Richard McGeown on August 5, 2013. The cultured beef burger was tasted by two food critics, Hanni Ruetzler and Josh Schonwald. Ruetzler said the following about the cultured beef burger "I was expecting the texture to be more soft... there is quite some intense taste; it's close to meat, but it's not that juicy. The consistency is perfect". Studies show people are very willing to pay a premium for lab-grown meat. 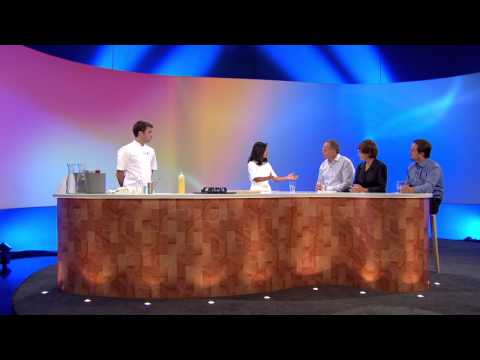 Culturing meat involves taking muscle cells from an animal and growing them independent of that animal in a bioreactor. There are two categories of bioreactor manufacturing techniques for cultured meat products: scaffold based techniques and self-organizing techniques.

Scaffold manufacturing methods rely on the proliferation of extracted muscle satellite cells, or embryonic myoblast cells, on material scaffolds that can be perfused with culture medium in a bioreactor. The resulting cellular network grown on the scaffold can be harvested and cooked like normal meat after being differentiated by environmental cues into connected myofibers.

Scaffold techniques for growing cultured meat were developed by a cohort of Dutch scientists in the Netherlands in the late 1990's and early 2000's. Scaffold culturing techniques make cultured meats with simple structures like ground and boneless meats for hamburgers and sausages, but not for meat products with more complicated structures such as steak.

In an article published on June 2, 2018, the Institute for Electrical and Electronic Engineers (IEEE) weighed the benefits and challenges of using cells (as opposed to plant products) to develop animal-free meat. They noted that using cellular components can allow developers to control proportions and types of fats in the final products, allowing them to control the flavor and nutritional content. Also, since the final product would actually be meat, it could be more palatable and convenient to consumers. However, a major hurdle for scientists looking to generate meat from cells is what to put into the nutrient mixture which coaxes the cells toward muscle fibers. Currently fetal bovine serum is used, a product derived from fetal calves in a costly and unsustainable process. These are problems that have been considered by several cell-based meat companies including Memphis Meats, Just, Inc., and SuperMeat, and others.

On March 9th, 2018 Kristopher Gasteratos founded CAS, associated with the Harvard Innovation Lab and the UN, to advance cellular agriculture and support the global commercialization of cultured meat.

On August 5th, 2013 the worlds first commercial cultured meat product was sold. Dr.Mark Post and his team at Maastricht University made a cultured beef burger that sold for $330,000 at a restaurant in the UK.

The first in vitro meat symposium

On April 11, 2008 in Aas, Norway, the worlds first in international in-vitro meat conference was held at the Norwegian Food Research Institute. This was the first time scientists and industry leaders met to discuss and identify issues surrounding the cultured meat industry.

NASA funded the study "In vitro edible muscle protein production system (mpps): stage 1, fish". Researchers were able to successfully grow and cook muscle tissue from Carassius auratus (goldfish) explants. Results of this study show that the tissue engineering techniques used had low contamination rates, were self healing, had strong cell proliferation; and according to a panel of judges, the final harvested and cooked explants had the same smell and appearance of fresh fish filets.

In 1995 the FDA approves commercial production and sale of in-vitro cultured meat products.

The French surgeon, Alexis Carrel, began a series of experiments in December 1912 investigating the growth of muscle tissue independent of their host organism. Alexis Carrel chose to use embryonic chick heart muscle tissue for his experiments. His muscle tissues were grown in petri dishes and were given a constant supply of growth medium, as well as a constant removal of waste. The muscle tissues were deemed immortal, and were able to self-replicate and survive for 34 years (until 1946); allegedly dying due to a scientist working in Carrel's lab forgetting to add growth medium to the cell culture.

How close are we to a hamburger grown in a lab?

Lab-Grown Meat Is Coming, Whether You Like It or Not

No animal required, but would people eat artificial meat?

The 3 things in lab-grown meat's way to industry transformation

The Science Behind Lab-Grown Meat

Why Do We Use Blood Extracted From Cow Fetuses to Make Fake Meat?

Inside the Quest to Make Lab Grown Meat | WIRED

The Future of Meat

The Meat of the Future: How Lab-Grown Meat Is Made

Title
Author
Date
Publisher
Description
IDTechEx Discusses Which Country Will Be Next to Approve Cultured Meat
IDTechEx
May 18, 2021
www.prnewswire.com:443
/PRNewswire/ -- In December 2020, Singapore made headlines by becoming the first country in the world to approve a cultured meat product for commercial sale....