Axie Infinity is an NFT gaming platform and marketplace.

Axie Infinity is an online gaming platform built on blockchain by Sky Mavis. The company was founded by Aleksander Leonard Larsen and Trung Nguyen in 2018. The game allows players to collect different digital pets called Axies, which can be raised, battled, and traded to other players in the Axie world. The game was originally inspired by the well-known game Pokemon.

There are two primary tokens used within the game: Axie Infinity Shards (AXS) and Smooth Love Potions (SLP). AXS is the game's native governance token, and holders of AXS are part of Axie's decentralized community and can help shape and govern the platform's development. Both AXS and SLP are ERC-20 tokens that can be traded on the Ethereum network; however, the AXS token is most commonly used for breeding new Axies.

According to data from Token Terminal, in early 2021, Axie Infinity was able to generate near USD $90 million in revenue in 30 days. On Token Terminal's list of other apps, this was more than the next ten apps revenue, which, combined, equaled USD $41 million in the same time period. Of this revenue, 95 percent remained with the players as the players owned the NFTs and relevant tokens.

Axie is a play-to-earn game and offers an NFT-based economy. In the game, players battle Axies and complete quests, with gameplay similar to other games such as Pokemon Go or Hearthstone. As in these games, the players trade and battle the Axies, in-game creatures which players collect, breed, raise, battle and trade, and which are digitized NFTs. The in-game currencies can be used to breed Axies, which can in turn be sold, or buy land in the game, with each plot of land also being an NFT and able to be sold.

Other than the Axies, the game also revolves around the SLPs, which are obtained through completing challenges and battling in the game. The SLPs are used to breed new Axies which can be used to further battle, or be sold to other players or new players. SLPs can be sold on their own in the game, as they are often priced against the USD, and top players are able to earn around 1,500 SLPs per day, which in mid 2021 represented roughly USD $435. 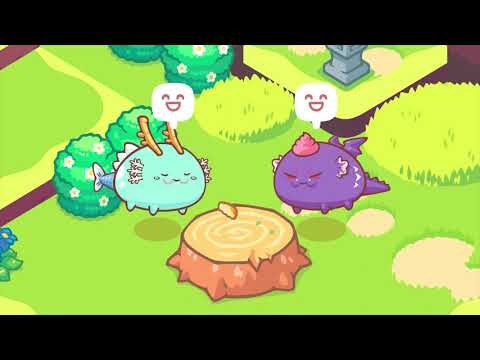 An intro to Axie Infinity

The game has over a million players who have grown during the COVID-19 pandemic and related economic concerns and lockdowns, especially in the Philippines and Venezuela, where the game has proved especially popular, accounting for 45 to 50 percent of the game's player base. The popularity is in part expressed in the Axie tokens climb in value. While the token sat around zero USD, it has since grown to be valued at over USD $60.

Another part of the popularity comes from the ability for players to earn a good income from the game, around USD $2,000 a month, which for some players from regions such as the Philippines or Venezuela can be as much as double the income more traditional jobs have offered. For these players, they often are sponsored by managers or guilds. These managers or guilds help players enter the game, which can cost as much as USD $1,500.

The ability to earn an income comes from breeding Axies, which can be traded in-game or in real life in the Axie Marketplace as NFTs. As well, other in-game items, such as real estate, flowers, barrels, and lamps are all tradable as NFTs, and can be bought and sold using Ethereum. For players to purchase and sell these digital assets, especially any of the tokens, the player has to have two wallets. The first can be a preferred wallet, which is then connected with a Ronin wallet. Ronin is Axie Infinity's Ethereum-compatible sidechain. The Ronin wallet allows users to access the network and earn SLP and AXS and interact in the in-game economy.

New players to the game are required to have three Axies in order to play. To get these Axies, players need to buy or borrow these Axies. Most are available for at least USD $190, although the average in mid 2021 was USD $350. Furthermore, the higher level, rarer, or mystic Axies sell for a lot more, as they are considered to be more desirable in game. As of late 2020, the most expensive Axie sold, called Angel, was sold for 300 Ethereum, which at the time of the sale was around USD $120,000. Whereas, around early 2021, a chunk of in-game real estate was sold for the equivalence of USD $1.5 million, with a monthly trading volume of around USD$170 million in 2021.

For their sponsorship, these guilds and managers take a cut from the earnings, earnings which are made by cultivating the in-game creatures called Axies, which can be battled with or sold at profit to other players. Often, the guilds are made of hundreds of players, each managing various accounts in order to develop Axie characters and increase the value of the Axies Infinity Shard token.

In the game there are the managers, previously mentioned, which are owners of teams or guilds and invest money to buy Axies. The scholars are players who are paid to play the game on behalf of the manager. This agreement often sees the managers and scholars split the profit either sixty-forty, or sixty-five-thirty-five, depending on the agreement, and often in favor of the scholar.

Each Axie is intended to be a unique creature which players can breed, develop, and trade or sell. This is as each Axies is an ERC-721 non-fungible token (NFT) and is intended to be unique. The creature has four different statistics, which include health, morale, and speed. And each statistic plays a role in the Axie's battle mechanics, including how much damage a creature can do, which creature attacks first, and how much damage the creature can take.

Further, each Axie is comprised of six body parts, which include back, ears, eyes, horns, mouth, and tail. Other than the eyes and ears, each of these parts have associated abilities which influence the Axie's capabilities in battle. Further, each body part has three genes associated with it, one dominant, one recessive, and one minor recessive gene. These gene distributions influence the type of Axie's which can be bred from existing Axies.

The Axies come in one of six normal classes, being aquatic, beast, bird, bug, plant, or reptile. Or they can be one of three secret classes, which include dawn, dusk, or mech. These classes each have strengths and weaknesses, which affect the Axie's overall stats, and affects how effective an Axie of one class is against an Axie of another class. For example, aquatic Axie's are strong against Axie's of the beast, bug, and mech classes, while the aquatic Axie is weak against reptile, plant, and dusk Axie classes.

The genes associate with an Axie will determine the type of creature capable of being bred. Breeding is an important part of the game, as this allows players to create new creatures. And these new creatures can be potentially rare and more powerful than their predecessors, and fetch a higher price. With some of the rarest types of Axies being considered Mystic Axies, or having mystic parts, with an Axie having more mystic parts being more valuable and sold at higher prices. The Axies can be bred a total of seven times. This is in order to limit the total Axie population and maintain the scarcity necessary for the in-game economy to thrive. Furthermore, each breeding costs 4 AXS and a variable number of SLPs, with the first breeding cycle costing 150 SLP which increases to 3,150 SLP by the final and seventh breeding.

8 Things to Know Before You Buy Axie Infinity (AXS)

Series A round
COO