Non-fungible tokens are specialized types of cryptographic tokens that represent something unique or rare.

A non-fungible token (NFT) is a specialized type of cryptographic token representing something unique, like a domain name, a limited-time skin for a video game, or other digital properties owned by a user. Therefore, the NFTs are not mutually interchangeable, meaning an individual might trade ownership of a domain name for ownership of a rare character skin or a cryptocurrency. NFTs differ from cryptocurrency; NFTs are entirely non-fungible, and they cannot be traded for something identical. Cryptocurrency is fungible and is exchanged for something that is of equal or identical value.

NFTs are used to create digital ownership and scarcity. They develop a possibility of interoperability across multiple platforms through blockchain, which acts as the management layer of NFT. Blockchain allows the exchange of an item from one party to another and enables the NFTs to be displayed in various eBay-style marketplaces. NFTs are used in specific applications to acquire unique or rare digital items like crypto-art, crypto-collectibles, and crypto-gaming. 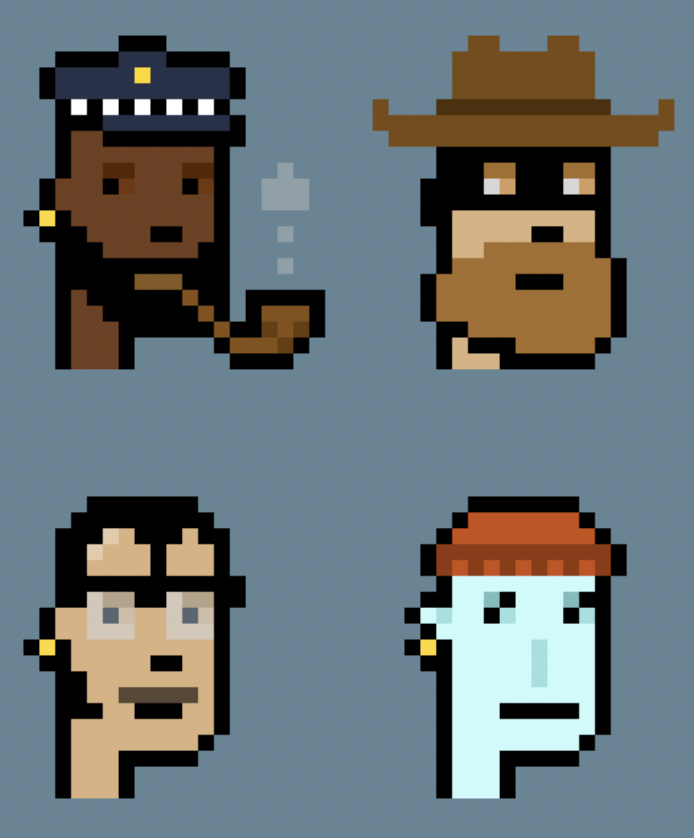 CryptoPunks by LarvaLabs and traded on Ethereum

Blockchain had early use in the art industry, allowing individuals to own digital intellectual property with records stored in the digital blockchain roster. NFTs are used to prove ownership and authenticity of digital art. In June of 2017, a company called Larva Labs released an art collector line called CryptoPunks. The “Punks” were available free of cost for anyone with an Ethereum wallet. Only 10,000 Punks were developed, no two alike, and all were quickly claimed. Ethereum wallet holders may now sell or trade punks for Ethereum coins. The average punk sold for approximately 4.12E, which equated to $2,998 on December 29, 2020. CryptoPunks are just one example of rare digital art.

Blockchain games also use NFTs; for example, CryptoKitties, a game developed by a Canadian company called Axiom Zen, allows users to use the Ethereum blockchain to represent in-game assets controlled by the user instead of the developer. In-game assets for CryptoKitties can be traded in third-party marketplaces requiring no added permissions from the developer.

There are various standards for non-fungible tokens, and the standards are what make NTFs valuable to consumers. Standards give developers a guarantee that the non-fungible assets will behave in a particular way and describe exactly how they will interact with the basic functionality of the specific asset.

The ERC-721 is a standard developed by the CryptoKitties developer, Axiom Zen, and was also the first standard that represented non-fungible assets. The ERC-721 standard is an inheritable Solidity smart contract, which means other developers can use the ERC-721 to create and develop new compliant contracts that fit their assets using the import tool from the OpenZepplin library. ERC-721 provides permissions to transfer non-fungible assets from one party to another and provides an identifier for that asset’s present owner. 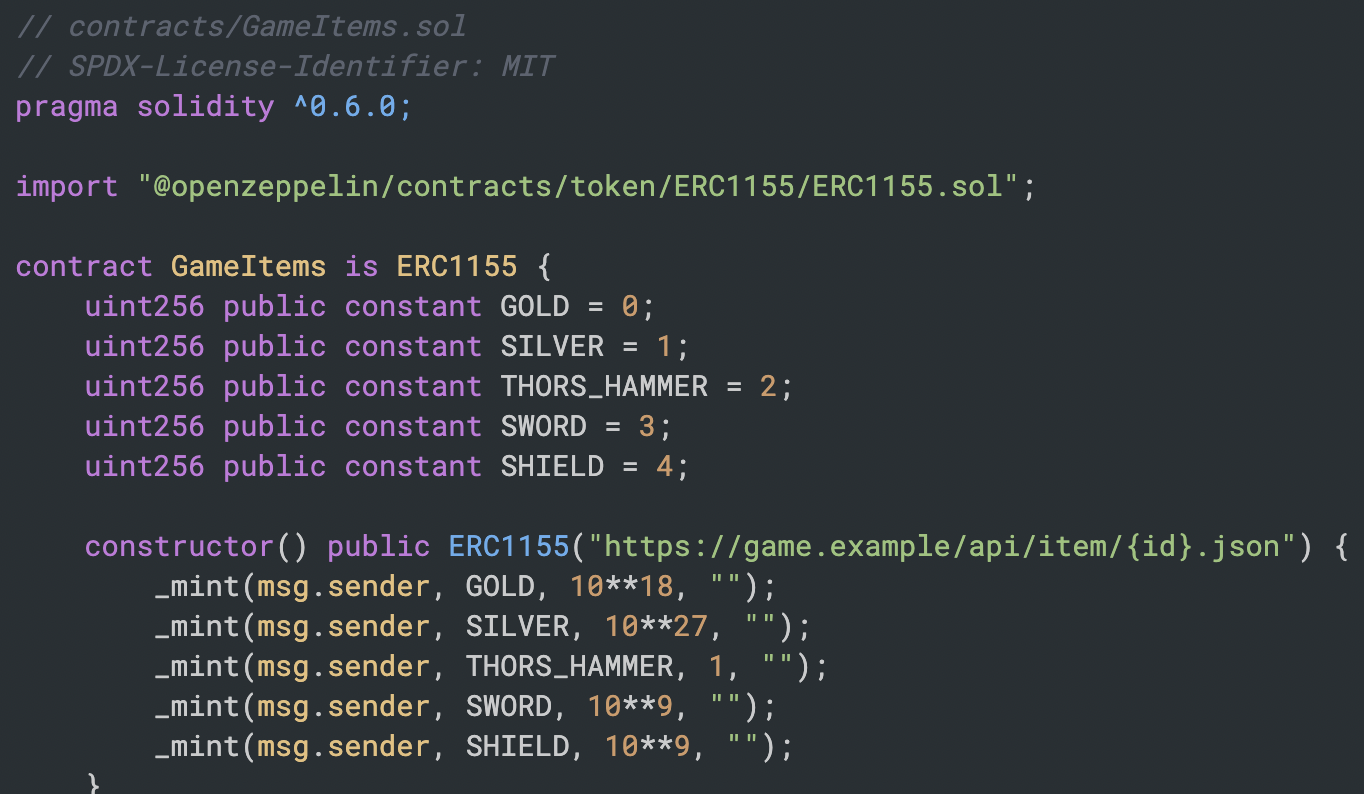 Example of an ERC-1155 token contract

Enjin developed the ERC-1155 standard. It is used primarily in selling classes of assets, meaning if a user has a wallet with 500 shields in it, the user may sell off all 500 shields at once instead of selling them individually. By allowing the sale of an entire class of items, ERC-1155 provides an increased efficiency from the ERC-721 standard, where each item has a unique identifier, even if the item is a duplicate. The downside to ERC-1155 is a loss of information. Due to the bulk sale of items, the history of ownership from one party to the next cannot be tracked for individual shields.

Composables are developing out of the ERC-998 standard, which provides a template for NFTs to own both non-fungible and fungible assets.

NFT1 was introduced to the Bitcoin Cash blockchain in 2019 as a part of the Simple Ledger Protocol (SLP), which can be used to support NFTs by minting non-divisible token supply of one without a minting baton called a Simple NFT. The specification code in Bitcoin Cash allows the grouping of many NFTs together.

The controversy around NFTs developed due to the rising energy use associated with blockchain activities and transactions. Academic studies and reports have been performed and published citing high electricity usage directly associated with the Proof of Work validation processes used in Ethereum and Bitcoin networks. Annual greenhouse gas emissions vary depending on the application and use of renewable energy; however, concerns about emissions directly related to blockchain report the potential of emissions rising to hundreds of megatons, or the equivalent of Sweden's annual emissions. This relates to NFTs, as the Proof of Work process includes NFT transactions.

0xUniverse is a blockchain space strategy where you build spacecraft, launch exploratory efforts, find new worlds and trade with other discoverers.

Blankos Block Party is an open-world multiplayer game styled like a block party. It focuses on custom art and design, building, exploration, and curating collections of unique and rare Blankos.

CSC | Space MMO. CSC is a casual space MMO with fast-paced combat, a player economy, and an uncapped crafting system.

Decentraland is an informal NFT marketplace, described as a fully decentralized digital world –like virtual reality. The users can purchase plots of land (non-fungible unique digital assets) that they can develop upon.

Hash Rush is a real-time strategy game that allows gamers to compete with each other for cryptocurrency and other rewards such as new skins and boosts.

My Crypto Heroes is a turn-based battle game. Players gather historical heroes, level them up, acquire extensions, and aim to be at the top of the Crypto World.

Users may buy, sell, and trade their voxel creations on secondary markets and truly become a part of this user-built world where everything you see is built by and for the community.

The Role of Non-Fungible Tokens in Art | Grit Daily News

What's this Non-Fungible Token (NFTs) Craze All About, Anyway?

Why NFT Sales Are the Music Biz's Wild West, and How It's Being Tamed

An Introduction to Non-Fungible Tokens (NFTs)

Fungible vs non-fungible tokens on the blockchain - 0xcert - Medium