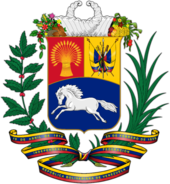 This article is about the country. For other uses, see Venezuela (disambiguation).

(/ˌvɛnəˈzweɪlə/; American Spanish: [beneˈswela] (audio speaker iconlisten)), officially the Bolivarian Republic of Venezuela (Spanish: República Bolivariana de Venezuela), is a country on the northern coast of South America, consisting of a continental landmass and many islands and islets in the Caribbean Sea. It has a territorial extension of 916,445 km2 (353,841 sq mi), and the population of Venezuela was estimated at 28 million in 2019. The capital and largest urban agglomeration is the city of Caracas. 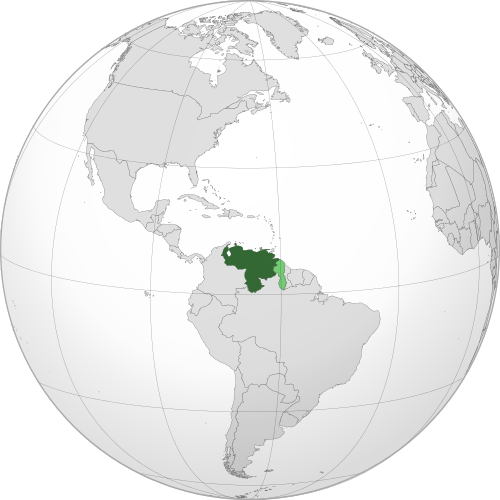 The continental territory is bordered on the north by the Caribbean Sea and the Atlantic Ocean, on the west by Colombia, Brazil on the south, Trinidad and Tobago to the north-east and on the east by Guyana. The Venezuelan government maintains a claim against Guyana to Guayana Esequiba.Venezuela is a federal presidential republic consisting of 23 states, the Capital District and federal dependencies covering Venezuela's offshore islands. Venezuela is among the most urbanized countries in Latin America; the vast majority of Venezuelans live in the cities of the north and in the capital.

The territory of Venezuela was colonized by Spain in 1522 amid resistance from indigenous peoples. In 1811, it became one of the first Spanish-American territories to declare independence from the Spanish and to form part, as a department, of the first federal Republic of Colombia (historiographically known as Gran Colombia). It separated as a full sovereign country in 1830. During the 19th century, Venezuela suffered political turmoil and autocracy, remaining dominated by regional military dictators until the mid-20th century. Since 1958, the country has had a series of democratic governments, as an exception where most of the region was ruled by military dictatorships, and the period was characterized by economic prosperity. Economic shocks in the 1980s and 1990s led to major political crises and widespread social unrest, including the deadly Caracazo riots of 1989, two attempted coups in 1992, and the impeachment of a President for embezzlement of public funds charges in 1993. The collapse in confidence in the existing parties saw the 1998 Venezuelan presidential election, the catalyst for the Bolivarian Revolution, which began with a 1999 Constituent Assembly, where a new Constitution of Venezuela was imposed. The government's populist social welfare policies were bolstered by soaring oil prices, temporarily increasing social spending, and reducing economic inequality and poverty in the early years of the regime. The 2013 Venezuelan presidential election was widely disputed leading to widespread protest, which triggered another nationwide crisis that continues to this day.

Venezuela is a developing country and ranks 113th on the Human Development Index. It has the world's largest known oil reserves and has been one of the world's leading exporters of oil. Previously, the country was an underdeveloped exporter of agricultural commodities such as coffee and cocoa, but oil quickly came to dominate exports and government revenues. The excesses and poor policies of the incumbent government led to the collapse of Venezuela's entire economy.The country struggles with record hyperinflation,[ shortages of basic goods, unemployment, poverty, disease, high child mortality, malnutrition, severe crime and corruption. These factors have precipitated the Venezuelan migrant crisis where more than three million people have fled the country. By 2017, Venezuela was declared to be in default regarding debt payments by credit rating agencies. The crisis in Venezuela has contributed to a rapidly deteriorating human rights situation, including increased abuses such as torture, arbitrary imprisonment, extrajudicial killings and attacks on human rights advocates. Venezuela is a charter member of the UN, OAS, UNASUR, ALBA, Mercosur, LAIA and OEI.

Evidence exists of human habitation in the area now known as Venezuela from about 15,000 years ago. Leaf-shaped tools from this period, together with chopping and plano-convex scraping implements, have been found exposed on the high riverine terraces of the Rio Pedregal in western Venezuela. Late Pleistocene hunting artifacts, including spear tips, have been found at a similar series of sites in northwestern Venezuela known as "El Jobo"; according to radiocarbon dating, these date from 13,000 to 7,000 BC.

It is not known how many people lived in Venezuela before the Spanish conquest; it has been estimated at around one million. In addition to indigenous peoples known today, the population included historical groups such as the Kalina (Caribs), Auaké, Caquetio, Mariche, and Timoto–Cuicas. The Timoto–Cuica culture was the most complex society in Pre-Columbian Venezuela, with pre-planned permanent villages, surrounded by irrigated, terraced fields. They also stored water in tanks. Their houses were made primarily of stone and wood with thatched roofs. They were peaceful, for the most part, and depended on growing crops. Regional crops included potatoes and ullucos. They left behind works of art, particularly anthropomorphic ceramics, but no major monuments. They spun vegetable fibers to weave into textiles and mats for housing. They are credited with having invented the arepa, a staple in Venezuelan cuisine.

After the conquest, the population dropped markedly, mainly through the spread of new infectious diseases from Europe. Two main north–south axes of pre-Columbian population were present, who cultivated maize in the west and manioc in the east. Large parts of the llanos were cultivated through a combination of slash and burn and permanent settled agriculture.

Venezuela is entirely located in the tropics over the Equator to around 12° N. Its climate varies from humid low-elevation plains, where average annual temperatures range as high as 35 °C (95.0 °F), to glaciers and highlands (the páramos) with an average yearly temperature of 8 °C (46.4 °F). Annual rainfall varies from 430 mm (16.9 in) in the semiarid portions of the northwest to over 1,000 mm (39.4 in) in the Orinoco Delta of the far east and the Amazonian Jungle in the south. The precipitation level is lower in the period from August through April. These periods are referred to as hot-humid and cold-dry seasons. Another characteristic of the climate is this variation throughout the country by the existence of a mountain range called "Cordillera de la Costa" which crosses the country from east to west. The majority of the population lives in these mountains