A service mesh is a technology used to control the way various parts of an application share data with one another. Other microservices systems perform similar tasks. However, a service mesh is a layer built directly into an app to perform this task where other methods are often external integrations. A service mesh layer is useful in documenting how effectively parts of an app are interacting, allowing developers to optimize and address issues more effectively.

Each piece of an application is known as a “service.” Each service is responsible for a specific function that relies on another service to perform the task requested by the end-user. An example of this is a user is on an e-commerce application finding an item they want to purchase in a particular size or color. The app has to communicate that the item is available by interacting with inventory systems that can communicate with product pages. Product pages then need to display the information to the end-user.

Most modern applications utilize service mesh to break down services into containers to form a network of services, each performing its specific business function. Sometimes for one service to perform, it has to refer to various other services first; this is where service mesh layers assist in not overloading systems with requests by optimizing the routing of requests and how the request moves from one service to another.

The function of service mesh

Service mesh does not bring new functions to an application’s environment as an application, regardless of the architecture type, needs specific rules that specify how requests are handled from the point of origin to destination. The primary difference between microservices and service mesh is that the logic governing component of service-to-service communication is removed from the individual services and is instead applied as a full layer of infrastructure by being built into the application through an array of network proxies. The proxies are used to route requests between microservices in the service mesh layer. The individual decoupled proxies form the layer and run alongside one another in a process known as “sidecar” proxies. 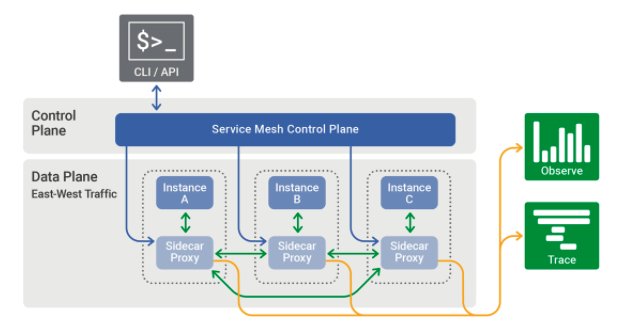 The microservice architecture differs from service mesh in that it allows developers to make changes to an application’s services without a full redeployment of an application. Additionally, microservices are more siloed in nature. Individual teams develop app segments with their specific tools and languages and are built independently to communicate with other elements and independently fail without causing a full application outage. Microservices are powered by service-to-service communication through logic governing coded into each service. However, as communication gets more complicated, service mesh becomes more valuable to an application due to its ability to compromise a larger number of services into one functional application.

Various companies and communities have launched open-source or community-driven service mesh codes for use in developer built applications, where others have developed service mesh produced built around the available open-source proxies such as Envoy, Traefik, and others.

Istio is an example of an extensible open-sourced service mesh built on the Envoy proxy, which allows teams to secure, control, observe, and connect services. Istio remains an ongoing collaboration between IBM and Google.

Linkerd is a service mesh for Kubernetes, and according to the company, it takes only 60 seconds to install to a Kubernetes cluster. Unlike its competitor Istio, Linkerd uses a Rust proxy called linkerd2-proxy, a proprietary build for Linkerd.

Consul Connect is the service mesh developed by HashiCorp, which focuses on segmentation and providing service-to-service networking features through application-level sidecar proxy. Consul is offered through two different proxy options: its proprietary built-in layer for proxy testing and the other being Envoy. HashiCorp has an open-sourced option for Consul Connect but also offers an enterprise-level version of the product.

Maesh is another open-sourced container-native service mesh that markets itself as “lightweight and straightforward.” Its largest difference from similar products is that it’s built on Traefik, an open-source reverse proxy, and load balancer. Maesh also does not utilize the sidecar method and instead uses proxy endpoints for each node, allowing the mesh to be less invasive than sidecar enabled service mesh. The prerequisite for Maesh to be implemented in an application is Kubernetes 1.11+ and a CoreDNS/KubeDNS installation.

OpenShift Service Mesh is the service mesh product developed by Red Hat. The company describes it as a hybrid cloud enterprise Kubernetes platform with numerous abilities for enterprise adaptation from its open-sourced code. OpenShift was built atop the open-sourced Istio, which allowed for an integration between the two platforms. OpenShift additionally uses Jaeger for distributed tracing for better tracking of how requests are handled between application services.

ServiceComb-mesher is the service mesh developed by The Apache Software Foundation. It is described by the company as a high-performance mesh written in Go, based on Go Chassis, a microservices development framework, and runs on the sidecar design methods. ServiceComb supports HTTP and gRPC and has application in various infrastructure types, including Docker, Kubernetes, virtual machines, and bare-metal environments.

Kuma, developed by Kong, is a service mesh. Kong defines the product as a “service mesh alternative called platform-agnostic control plane.” Kuma is built on the open-sourced Envoy proxy and provides networking features for security, routing, and communications observation. Kuma is natively compatible with Kong, which allows for simple implementation for enterprises using the Kong API.

Companies in the service mesh industry

The latest numbers come after the company announced a $23 million Series B round of financing and its re-organized, rebranded Gloo API Infrastructure Platform suite and product portfolio at the end of last year.

2021 - Buoyant, the creators of Linkerd, today announced that Linkerd was named the Best Open Source DevOps Tool of 2020 by the Tech Ascension Awards.

HashiCorp this week announced it has made available an update to its open source Consul service mesh that is more application-aware and easier to install using the Kubernetes application programming interface (API).
Solo.io announces service mesh platform aimed at enterprise customers
Service Mesh - The New Battleground For The Platform Wars.

The service mesh is fast becoming the battleground in the platform wars. Amazon, Google, Microsoft, IBM, Red Hat, VMware and many other ISVs are competing to gain the mindshare of developers and operators.

Service Mesh: Past, Present and Future