Memetic warfare is considered a modern type of information warfare and psychological warfare involving the use of memes on social media.

Memes are largely understood as images or short videos, considered harmless entertainment and including funny or snarky comments on current events. In the case of memetic warfare, these common forms of entertainment have become features of political campaigns, propaganda efforts, and disinformation campaigns.

The word "meme" comes from the Greek meaning "that which is imitated" and the modern context has largely been credited to Richard Dawkins, where he used the concept, borrowed from biology, to talk about cultural products which replicate and spread in his 1976 book The Selfish Gene. In the book, Dawkins saw memes as religious rituals, catchy melodies, or ideas with similar impact on human societies and individual behaviors. 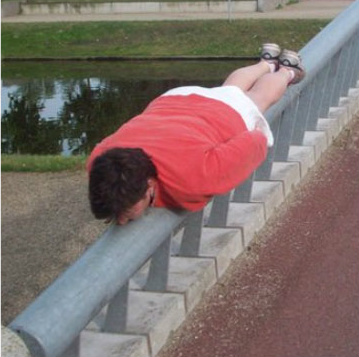 Example of the planking fad.

Examples of these types of memes could include more traditional cultural images such as the Jesus fish or Uncle Sam, but came to include things like the "planking" fad, in which people would lie flat in weird places and pose for photographs. The advent of the internet meme followed, which is described usually as a photograph with a clever caption shared around the web. These memes are generally created anonymously, can be endlessly remixed for new social or cultural contexts, are shared on various social platforms, and most seem to appear out of nowhere.

Memes can resemble traditional propaganda: often a hostile government can use them to spread malicious information, and, because their are a popular and common way for people to express themselves, it is easier to make memes without them being suspected as being information warfare. Memes can also be more targeted than traditional propaganda, which tends to focus on large groups of people with a spatial or political link.

At its most basic, meme warfare presents an opportunity for individuals to seize control of the means of media production from corporate interests. It is a viral and open-source medium allowing individuals to compete for attention against advertisers, marketing campaigns, and public relations statements. Perhaps in a gesture to their effectiveness, Vladimir Putin made it illegal to share memes of Putin as a "gay clown" and China banned Winnie the Pooh after President Xi Jinping was compared to the animated bear in memes.

As early as 2006, United States Marine Corps Major Michael B. Prosser proposed in his Master of Operational Studies thesis the need to develop memetic warfare capabilities. He looked to Dawkins' ideas of memes as units of cultural transmission, and further put forward the idea that memes held the potential to be used like medicine to inoculate the enemy and generate popular support. He also noted that information operations, psychological operations, and strategic communications, were not at that time using memes effectively.

In a NATO StratCom brief from 2015, Jeff Giesea described the need for NATO and similar intelligence and defense agencies to develop the capabilities for memetic warfare. In the brief, he considered the capability ISIS had in their recruiting and propaganda efforts through the use of memes on social media platforms. He remarks on the relatively simple capabilities memetic warfare offers, noting three Russian girls were able to entrap (or catfish) ISIS recruiters in early 2015, and went on to remark:

Trolling, it might be said, is the social media equivalent of guerrilla warfare, and memes are its currency of propaganda. Daesh [ISIS] is conducting memetic warfare. The Kremlin is doing it. It's inexpensive. The capabilities exist.

At this time, the United States State Department's efforts against the use of social media by ISIS was their "Think Again, Turn Away" campaign, which had by 2015 proven ineffective against the outreach capable of ISIS through memetic warfare. The "Think Again, Turn Away" campaign was largely a counter-message strategy, where the United States forces argued against ISIS memetics on Twitter. These counter-messages were intended to counter the ideas put forth by ISIS memetics, but in many cases worked instead to give a larger platform and audience for ISIS arguments.

In 2017, the European Union and NATO established the European Centre for Excellence for Countering Hybrid Threats, which has an understanding of memes as information warfare. Although, the centers remit is more analytical than proactive containing an awareness as defense strategy. 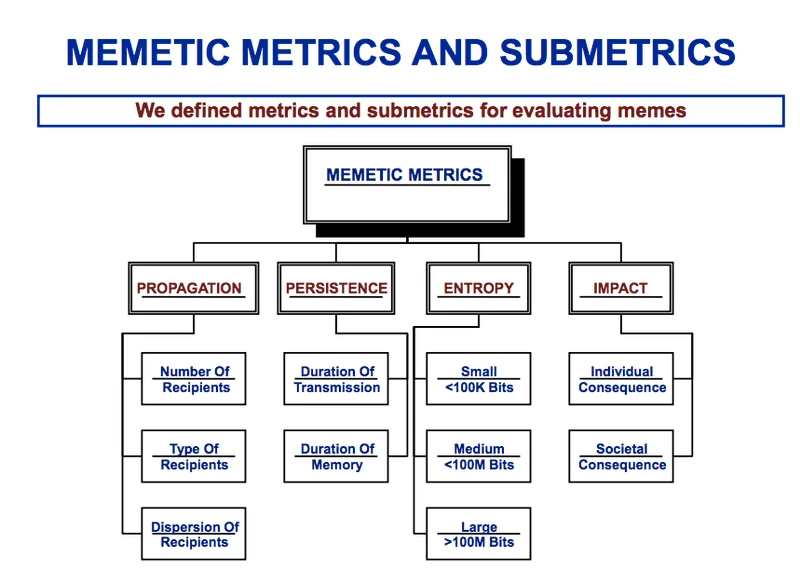 In image from Dr. Finkelstein's study and attempt to measure the effectiveness of memes.

In 2011, The Defense Advanced Research Projects Agency (DARPA) offered $42 million in grants for research into what it called "social media in strategic communications" with the hope that the government could detect purposeful or deceptive messaging and misinformation and create counter messaging to fight it. Dr. Robert Finkelstein was a recipient of one of these grants, and he investigated how DARPA could weaponize memes. Dr. Finkelstein's study, Military Memetics, centered on the problem of whether memetics could be established as a science with the ability to explain phenomena or that memes were actual components of reality and not just marketing concepts. As a result of his research, Dr. Finkelstein recommended memetic warfare for all public affairs units, the Central Intelligence Agency, and the United States Army Civil Affairs and Psychological Operations Command.

Based on it's largely decentralized and anonymous nature, memetic warfare tends to favor insurgencies and disorder. John Robb, former United States Air Force Pilot involved in special operations, suggested the United States military would always be at a structural disadvantage when it comes to applying memetrics in an effective way. This is because, as John Robb goes on to say, when memetic warfare is effective it yields disruption, and from that disruption a broad manipulation of public sentiment, which is not, in his opinion, in the military's wheelhouse. Jacob Siegel summed up the use of memetic for insurgency campaigns in these words:

Memes appear to function like the IEDs of information warfare. They are natural tools of an insurgency; great for blowing things up, but likely to sabotage the desired effects when handled by the larger actor in an aysmmetric conflict.

Memetics have also been used as recruitment tools for extremist groups. A site such as 8chan, which has been used as a space for normalizing extreme behavior through cooperative reinforcement, requires users to post images with text, and through this feature 8chan has become a meme generator. And these sites are often visited by users who act out extreme behaviors, such as Brenton Tarrant, the Christchurch mosque terrorist, who frequented 8chan. These memes in turn seep into the larger common areas of the internet. Users are often aware of this process, with a meme on 4chan commenting that everyone on 4chan should be considered a terrorist.

Memetic warfare has already been adopted by states in different ways, and besides the banning of offensive images by Russia and China's Presidents. In China, 20,000 to 50,000 people are employed as internet police, to enforce ban's such as the ban on Winnie the Pooh, while an additional quarter million "trolls" are employed to spread pro-Beijing material domestically and abroad. A further 1,200 TikTok channels are run by various Chinese civil authorities which have produced more than 13,000 videos and a combined 4.8 billion views in a domestic attempt to control online narratives.

Meanwhile the Taiwanese government installed memetic engineering teams in each government department which work to respond to disinformation within 60 minutes through a "humor over rumor" approach. These teams largely counter Chinese political warfare efforts and domestic disinformation. And the Russian government has their Internet Research Agency, and other "Russian troll farms" which work to spread disinformation and discord on social media platforms.

Memetic warfare has also been used in territorial conflicts, such as those between Hong Kong and China, Gaza and Israel, and India and Pakistan as a form of viral propaganda in an effort to sway both local and international sentiment.

Memetics in the United States

The United States Army used a social media-focused "Warriors Wanted" campaign, largely a memetic campaign, for recruiting purposes. While the British Army used a similar campaign, which borrowed century-old recruiting posters to ridicule millennial stereotypes. Despite ridicule, both of these campaigns increased recruitment for each respective military.

However, the use of memetic warfare on a state level is almost impossible as laws from the State Department and Broadcasting Board of Governors expressly prohibit domestic propaganda. And, although most social media platforms where memetic warfare would be waged are international platforms and do not largely recognize political borders, these laws would likely prohibit the use of memetic warfare for United States agencies. If these legal hurdles were cleared, it is also not clear which government agency would be in a position to conduct such a campaign or if it would be done through contracts with private companies.

The history of information and disinformation campaigns in warfare is long, whether it was shouted taunts or misinformation dropped in leaflet form. The former Soviet Union set up an office for "dezinformatsiya" campaigns in 1923, the term coined by Joseph Stalin to describe false information carefully constructed with the intention to deceive. Since then, memetic warfare has been studied by international militaries with respects to information warfare.

The Dawkins concept of the meme was further refined in a 2006 essay "Evolutionary Psychology, Memes and the Origin of War" by Keith Henson, who defined memes as replicating information patterns: ways to do things, learned elements of culture, beliefs or ideas.

Arguably the first time memetic warfare came to the attention of many, the United States electoral race between Donald Trump and Hilary Clinton saw the use of memetic warfare. During the lead up to the election, memes promulgated pro-Trump and anti-Clinton sentiment across various online platforms, with these memes being later considered to have swayed the election in Donald Trump's favor. A lot of these memes were generated on the 4Chan message board /pol/, the politically incorrect section of 4Chan, where users would take these memes and, using a network of fake Twitter and Reddit accounts, push them as far as possible. The sub-reddit, r/The_Donald was found to be especially effective at spreading memes and pushing them to fringe and mainstream web communities. 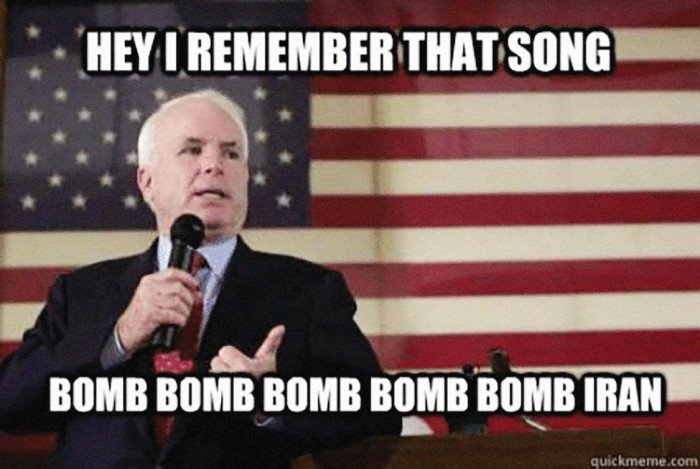 An example of the 2007 John McCain memes.

The use of viral memes for political purposes in the United States election process was used as early as the 2007 election, when John McCain was campaigning for president, sang "Bomb bomb bomb, bomb bomb Iran" to the tune of the Beach Boys' song "Barbara Ann" and was turned into meme.

In 2020, ahead of the United States presidential election of that year, National Counterintelligence and Security Center Director William Evanina warned of nations seeking to use influence measures in social and traditional media in an effort to sway United States voters' preferences and perspectives, to shift United States policies, to increase discord, and to undermine confidence in our democratic process.

Voters should be wary of 'meme warfare' ahead of 2020 United States Presidential elections.
Memes are becoming the new frontier of information warfare
Western nations must train Gen-Z soldiers for the era of meme warfare
Russia's new battle strategy includes memetic warfare and being fluent in trolling.
How Russia Trolls Used Meme Warfare to Divide America.

A report for the Senate exposes how the IRA used every major social media platform to target voters before and after the 2016 election.

Jeff Giesea presents his study "It's time to embrace memetic warfare." to NATO's StratCom.
Defense Advanced Research Projects Agency offered $42 million in grants for research into memetic warfare.
United States Marine Corps Major Michael B. Prosser published his Memetics: A Growth Industry in US Military Operations, in which he proposes the creation of a Meme Warfare Center.

Disinformation That Kills: The Expanding Battlefield Of Digital Warfare

How memes got weaponized: A short history

Meme warfare: how the power of mass replication has poisoned the US election

Memetics - A Growth Industry in US Military Operations

Protecting Democracy in an Age of Disinformation

What Is Memetic Warfare and How Does It Threaten Democratic Values?