45th president of the United States of America, American businessman and television personality. 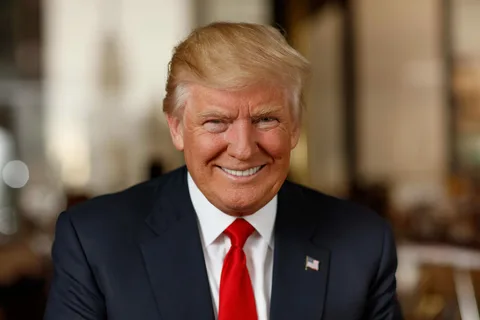 Before entering politics, he was a businessman and television personality. Trump was born and raised in the New York City borough of Queens and received an economics degree from the Wharton School. He took charge of his family's real estate business in 1971, renamed it The Trump Organization, and expanded it from Queens and Brooklyn into Manhattan. The company built or renovated skyscrapers, hotels, casinos, and golf courses.

Trump later started various side ventures, mostly by licensing his name. He managed the company until his 2017 inauguration. He co-authored several books, including The Art of the Deal. He owned the Miss Universe and Miss USA beauty pageants from 1996 to 2015, and he produced and hosted The Apprentice, a reality television show, from 2003 to 2015. Forbes estimates his net worth to be $3.1 billion.

Trump entered the 2016 presidential race as a Republican and defeated sixteen opponents in the primaries. Commentators described his political positions as populist, protectionist, and nationalist. He was elected president in a surprise victory over Democratic nominee Hillary Clinton, although he lost the popular vote. He became the oldest and wealthiest person ever to assume the presidency, and the first without prior military or government service. His election and policies have sparked numerous protests.

Trump has made many false or misleading statements during his campaign and presidency. The statements have been documented by fact-checkers, and the media have widely described the phenomenon as unprecedented in American politics. Many of his comments and actions have been characterized as racially charged or racist.

During his presidency, Trump ordered a travel ban on citizens from several Muslim-majority countries, citing security concerns; after legal challenges, the Supreme Court upheld the policy's third revision. He enacted a tax cut package for individuals and businesses, which also rescinded the individual health insurance mandate and allowed oil drilling in the Arctic Refuge. He appointed Neil Gorsuch and Brett Kavanaugh to the Supreme Court.

In foreign policy, Trump pursued his America First agenda, withdrawing the U.S. from the Trans-Pacific Partnership trade negotiations, the Paris Agreement on climate change, and the Iran nuclear deal. He recognized Jerusalem as the capital of Israel; imposed import tariffs on various goods, triggering a trade war with China; and started negotiations with North Korea seeking denuclearization.

Most of Trump's pardons and commutations were granted to people with personal or political connections to him. In his term,

Donald Trump leaves the White House on the morning of January 20. He is the first president since 1869 to skip his successor's inauguration. He and his family fly to Florida.

Donald Trump becomes the first US president to be impeached twice, when the US House of Representatives impeaches him for “incitement of insurrection,” for the attack on the Capitol on January 6. The House votes 232 to 197 with 10 Republicans supporting the impeachment.

President Trump calls the Secretary of State of Georgia to pressure him to "find" votes so that Trump can win Georgia. The Secretary tapes the conversation and leaks it to the press the next day.

The Electoral College officially votes Joe Biden as president and Senator Kamala Harris as vice president of the United States. This decision ends the legal battle initiated by the Trump campaign which alleged mass amounts of voter fraud in the election.

US Attorney General William Barr announces his resignation and that he will step down before the end of the Trump presidency. Barr's resignation comes shortly after Trump discusses firing the attorney general after his announcement that the Justice Department has not found evidence of voter fraud.

The Supreme Court rejects the case brought by the Texas justice department and 17 states that alleged widespread voter fraud to contest the results of the election.

US Attorney General William Barr announces that after their detailed investigation, the Justice Departmetn found no widespread voter fraud.

Directly after the election results are announced, President Trump and his campaign began filing lawsuits across key swing states in an attempt to contest the election by claiming mass amounts of voter fraud from mail-in ballots.

The Associated Press, along with many other news networks, declares former Vice President Joe Biden winner of the presidential election. Biden will become the 46th president of the United States.

In the early morning hours, President Trump declares victory in the 2020 presidential election and claims the remaining ballots should be cast out due to fraud.

This may be the most important speech I've ever made....

Search on Google News
Search on Bing News
Title
Author
Date
Publisher
Description
GOP Rep. Nunes leaving Congress for Trump social media firm
By JILL COLVIN, MARY CLARE JALONICK and MICHAEL R. BLOOD
December 6, 2021
AP NEWS
WASHINGTON (AP) -- California Republican Rep. Devin Nunes, who was one of former President Donald Trump's most devoted loyalists in Congress, is leaving the House at the end of this year to join Trump's fledgling media company.
Trump social-media venture under scrutiny by US regulators
December 6, 2021
AP NEWS
NEW YORK (AP) -- Regulators are asking questions about the deal to bring Donald Trump's new social media company to the stock market, one that has attracted both legions of fans of the former president and people looking to make a quick profit.
Miami mayor seeks 2nd term as he raises national profile
By ADRIANA GOMEZ LICON
October 31, 2021
AP NEWS
MIAMI (AP) -- Miami Mayor Francis Suarez is hoping to easily secure a second term Tuesday, with his reelection campaign showing he can raise millions as he seeks to elevate his profile at a national level.
Florida judge sends Trump suit against Twitter to California
By CURT ANDERSON
October 27, 2021
AP NEWS
ST. PETERSBURG, Fla. (AP) -- Former President Donald Trump's lawsuit to get his Twitter account restored must be heard in a California court, not a Florida one, under a user agreement covering everyone on the social media platform, a federal judge ruled.
Trump could get big 'bonus' shares in new social media firm
By BERNARD CONDON and ALEX VEIGA
October 27, 2021
AP NEWS
NEW YORK (AP) -- Donald Trump's social media company will get tens of millions in special bonus shares in a new publicly traded entity if it performs well, handing the former president possibly billions of dollars in paper wealth based on current stock prices, according to a prospectus filed with security regulators Tuesday.
SHOW MORE