Kumu Networks created a full-duplex wireless system that transmits and receives on the same frequency and doubles efficiency on the spectrum. This solution employs software-controlled self-interference-cancellation technology that eliminates the need for frequency or time division duplexing. This technology can be used to improve spectrum reusability and overcome the limitations of hardware-based filters.

SIC addresses the problem of spectrum scarcity in wireless networks, particularly at frequencies below 6 GHz. The company considers spectrum scarcity to be a major inhibiting factor affecting the growth of the wireless industry. This full-duplex solution reduces scarcity in the spectrum by doubling its efficiency. For instance, Kumu Networks’ full-duplex technology can be beneficial to wireless operators bidding for spectrum at auctions.

SIC also simplifies spectrum management. It offers the potential to contribute to the evolution of 5G technologies toward denser heterogeneous networks and can be utilized in wireless communication systems in numerous ways:

SIC technology helps multiple radios operating in close proximity to avoid interference and cooperate. This is particularly useful in homes, where space is limited and the number of radios and antennas is increasing. Unlike any other system, self-interference cancellation can neutralize the noise created by transmitters in their own and nearby receivers.

Kumu Networks’ claims that its SIC technology is the only solution that completely and simultaneously reuses the access spectrum for backhaul, enabling true “self-backhaul” and increasing network capacity. Unlike other IAB schemes, Kumu Networks’ solution does not compromise performance by dividing the 5G microcell’s wireless capacity between access and backhaul.

While IAB is a new application, Kumu Network’s SIC technology is a field-proven, commercially-deployed solution used by Tier-1 operators in LTE Relay Node applications, where many LTE macrocells suffer from limited or insufficient coverage.

Kumu Networks’ proprietary K6 Canceller suppresses the interference presented by a transmitter to a co-located receiver; also if there is zero guard band between the two radios, it allows densification and spectrum utilization in every RF (radio frequency) environment. 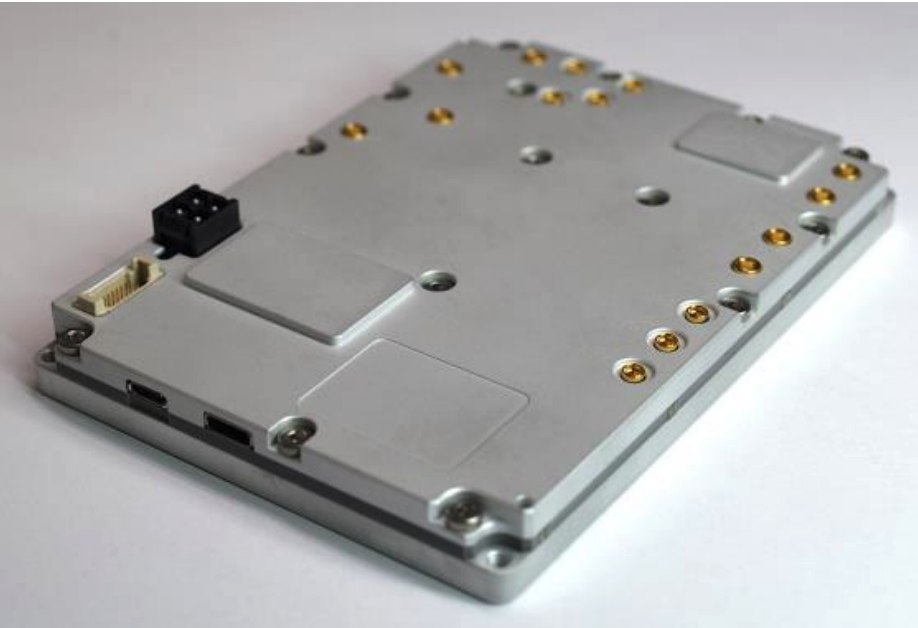 The solution adapts in real time to the changing reflection environment to ensure consistent high isolation between the two radios. The K6 Canceller has the following features:

According to Kumu Networks, interference is the most significant limiting factor for wireless communication. Self-interference cancellation is a software-controlled, tunable solution that offers several advantages over conventional solutions.

Conventional passive filters must be custom-designed for specific frequencies and cannot be modified or reconfigured after they are manufactured. Due to these limitations, devices are forced to limit their choice of frequencies or include a multitude of filters.

On the other hand, devices such as modems using a self-interference cancellation-based tunable filter can straightforwardly and inexpensively support the channel bandwidths and configurations defined in the DOCSIS standards.

KU1500 is a chip-scale implementation of frequency agnostic taps for analog self-interference cancellation or analog FIR filtering. Specific taps can be used to increase overall dynamic range and transmit power where it is higher than what the KU1500 can support.

Digital cancellation taps can be used where Analog Cancellation alone does not provide sufficient cancellation depth or where longer delay reflections impact the receiver and need to be cancelled to meet radio performance specifications. The KU1500 has 4 analog FIR filter chains organized as 12 programmable taps per chain with a maximum of 350ns aggregate delay through each chain. Two chains can be cascaded for a maximum of 24 taps for a total delay of up to 700ns. 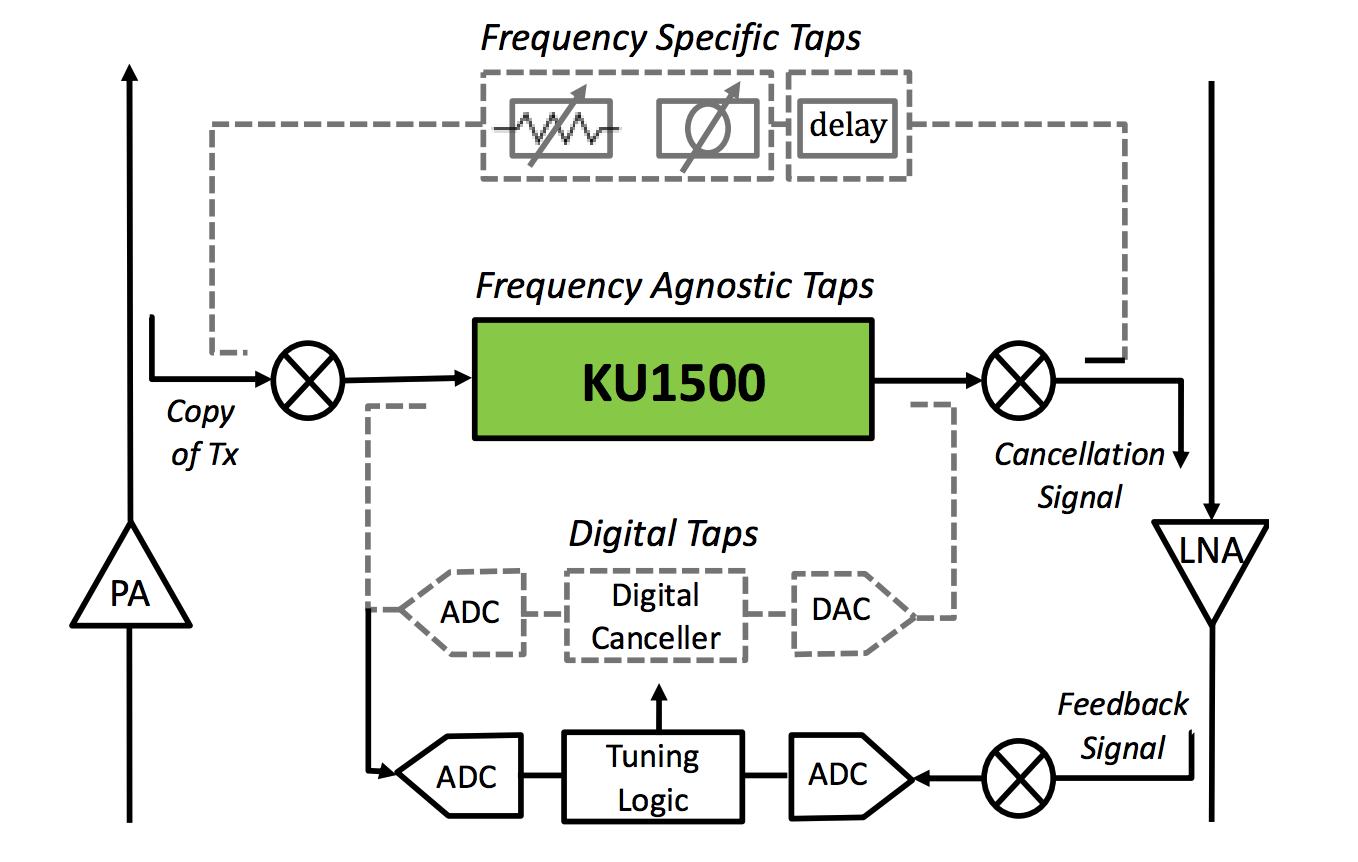 Alternatively, the chains can be configured to support 2x2 MIMO operation. The IC (integrated circuit) supports a range of signal processing applications where analog signal manipulation is required to avoid the delay and resolution problems that digital conversion introduces. For example, the chip can be used to implement full-duplex systems or to improve co-existence between co-located radios. Features of the KU1500 include the following:

To distribute unlicensed spectrum equally, wireless standards such as WiFi employ a listen-before-talk (LBT) strategy. It requires radios to function idly in "listening" mode for an extended period of time in order to infer the use of spectrum.

Amplify and Forward repeaters are a widely-used solution for improving coverage. However, the effectiveness of these systems depends on the antenna isolation between donor and access sides. As a result, typical high-gain repeaters require long cables and complicated installations to place the donor antenna as far as possible from the access antenna.

Since the self-interference cancellation technology adds electronic isolation to the physical isolation between the antennas, repeaters equipped with this technology can achieve high-gain even when the antennas are in close proximity to each other. Kumu Networks believes this to be critical for 5G mmWave coverage due to the limited propagation of these signals.

The diagram below illustrates how the Digital Cancellation Logic fits within a 5G Repeater architecture to maximize its gain. 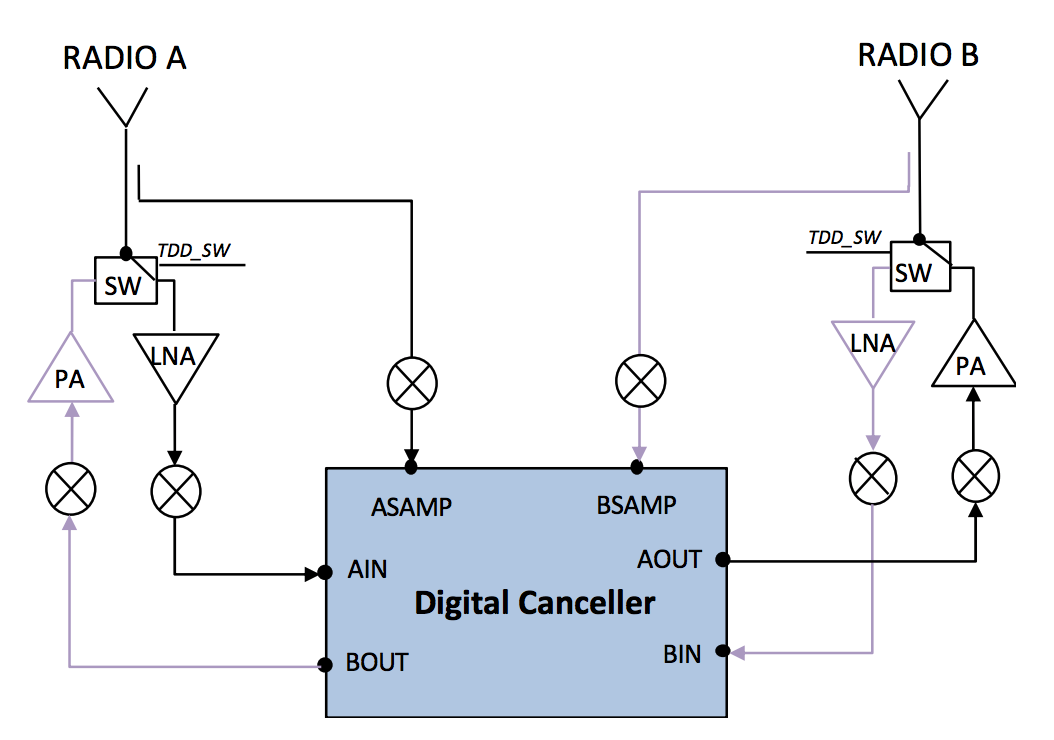 Integrated Access-Backhaul (IAB) is a tool defined by 3GPP in the 5G standard to efficiently overcome the limited propagation of mmWave signals that resembles a wireless 5G mesh node. With Kumu Networks’ self-interference cancellation technology, 5G microcells can reuse their exact same millimeter wave spectrum allocation for both access and backhaul.

Kumu Networks expects to provide its SIC solution to the developing 5GHz/6GHz WiFi mesh market as the company considers it likely that with the opening of the 6GHz spectrum for unlicensed use most WiFi APs (access points) will include both 5GHz and 6GHz radios.

As 5GHz and 6GHz WiFi is introduced, the 5GHz U-NII-3 band where WiFi is extensively used will have only a small guard band separating it from the new 6GHz band. In addition, this guard-band, known as U-NII-4, is being considered by the FCC for unlicensed use. Therefore, the company believes that the new 6GHz band will benefit from its self-interference cancellation solution.

The graph below portrays Kumu Networks' market position relative to other companies. 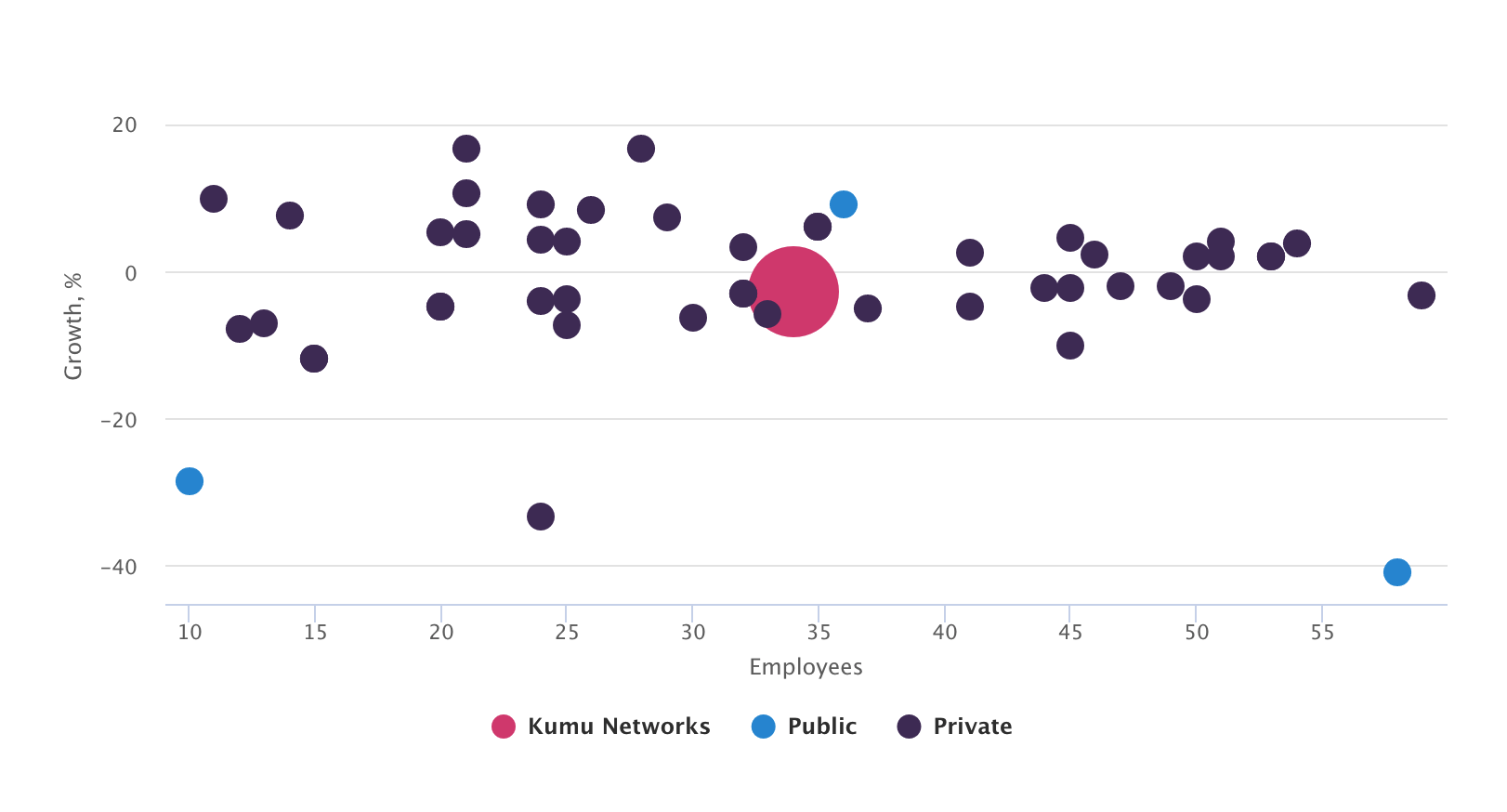 Cancellation in 5G and Beyond