Kepler Communications is a company that has a focus on satellite production and communication networks.

Kepler Communications is a company that looks to develop and establish in-space communication networks for space-borne assets. The company was founded in 2015 by Jeffrey R Osborne, Mark Michael, Mina Mitry, Samer Bishay, and Wen Cheng Chong, in Toronto, Ontario, Canada.

Kepler Communications looks to build infrastructure for spacial connectivity. Their infrastructure includes and connects launch vehicles, space stations, habitats, and satellites. They develop, launch, and operate satellites to provide a global connectivity and introduce internet in space. They believe this goal will allow for further space exploration, as communications and information will be able to be shared through the the network of space.

Kepler Communications looks to provide their services to industries such as maritime, natural resources, research and exploration, defense, shipping, and logistics. One of their communication solutions is their PolarConnect, which enables, organizes, and operates at the Earth's most extreme conditions to connect and disseminate information with other areas.

In an article on Costanoa Ventures' Perspectives blog, Constanoa partnerJohn Cowgill elaborated on Kepler Communications' objectives and accomplishments. This included the company's ability to immediately generate revenue by activating customer services simultaneously with nano-satellite deployment, resulting in immediate-return profitability for partners and investors.

As of October 2018, Kepler's connectivity service was operational, after the company had secured rights to the Ku-band spectrum and launched the first satellite in the Kepler communications network that year. According to Cowgill, as more satellites are deployed, the latency of Kepler's service will decrease to near real time, and the network will be able support connectivity for hundreds of thousands of IoT devices.

Cowgill noted that the market opportunity in the satellite telecommunications sector is $1.7 billion annually and expects further growth from 2018 onwards as the number of devices connected to the internet continues to expand. Cowgill also drew attention to Kepler's proprietary radio that addresses hardware connectivity problems with a software solution and the company's custom antennas adjusted to the Ku-band frequency.

The overview also discloses that by 2022, Kepler's satellites are to allow containers that are in transport to communicate in near-real time via sensors. According to DB Digital Ventures, the benefits for logistics customers include improvements along the supply chain and consignment tracking in areas not covered by a cellular network.

Linda Zhang, a member of York Angel Investors (“YAI”), invested in Kepler in February 2016. The investment had been motivated by what Zhang discerned to have been Kepler's expertise in their industry and the technology. “[The Kepler Communications team] are a group of talented engineers and, as Angels, know the business world very well. I invested because the team was able to turn their idea into a sound business plan,” Zhang noted.

According to York Angel Investors, Angel investment was instrumental in Kepler's development, having provided the company with the capital necessary to reach key milestones that led to new investors and product deployment. “The end result for us has been that our team has been able to hit key technical, regulatory, and customer development milestones,” Mina Mitry commented.

The Creative Destruction Lab (CDL) is a non-profit seed-stage program for companies in the science and technology sectors. The nine-month program employs an objectives-based mentoring process with the goal of maximizing equity-value creation. The CDL is particularly suited to early stage companies with links to university research labs. Kepler participated in CDL's 2015/16 cohort program. 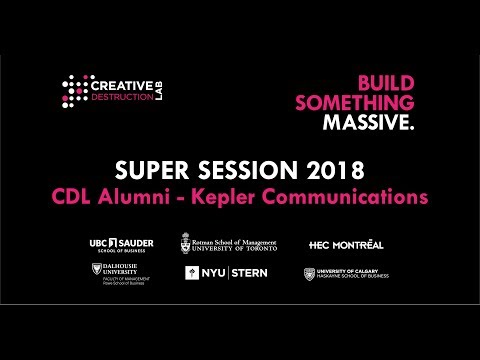 The DMZ noted that unlike some of Kepler Communications' competitors, their satellites have lower latency since they operate in close orbit. According to the DMZ, Kepler's products can cover large areas and are relatively cheaper than conventional connectivity methods, such as fibre-optic installations.

UofT Hatchery defined Kepler's aim as the establishment of a space-based communications network to serve as an internet service provider for space assets. Such a solution would potentially increase the functionality of spacecraft by enabling real-time access to space assets, reduce the cost and time required to deploy space assets by managing ground communications infrastructure, and reduce the time-to-market (TTM) for spacecraft operators by purchasing and subsequently leasing out spectrum allocations such that satellite operators will no longer need to acquire spectrum.

Kepler Communications obtained its initial funding in 2015, in part through Start@UTIAS, a Faculty of Applied Science and Engineering incubator. According to Jeffrey Osborne, vice-president for strategy and business development at Kepler, the initial support helped Kepler to develop its core intellectual property, which includes the specialized radio equipment that powers the satellites. While the company’s initial focus has been to use satellites to provide an inexpensive connectivity solution on land around the globe, Osborne claims that the company's long-term vision is to enable connections between space-based vehicles.

About Us | Kepler Communications

The Entrepreneurship Hatchery at UofT