Satellite IoT is the technological intersection of two existing industries—satellite networking and the internet-of-things (IoT).

Satellite IoT is the technological intersection of two existing industries—satellite networking and the Internet-of-Things (IoT). The technology utilizes new and existing satellites, operating as standalone services or in conjunction with terrestrial cellular networks, to provide IoT connections to consumer and corporate devices anywhere on Earth.

The market for IoT has grown significantly since the mid-to-late 2010s, with interconnected smart devices becoming increasingly utilized in private, corporate, and industrial settings. While traditional terrestrial cellular networks effectively handle IoT connections, these networks only cover approximately 20% of the Earth's surface. The increase in IoT use and lack of global coverage has prompted advancement in satellite network technology, as well as an increase in the overall number of providers.

Low-Power Wide-Area (LPWA) networks are non-cellular protocols that were developed to optimize IoT applications needing longer ranges, low bit-rates, and low energy and power use. LWPA networks have proliferated in the past decade and are expected to account for about 60% of all IoT connections by 2028, but will face challenges associated with regulations and global connectivity. Satellite is a key technology that can easily handle these obstacles and also reach objects with limited to no access to terrestrial networks.

Despite the advantages of satellite, existing technology was not designed to work with IoT networks; the lack of optimized groundwork means satellite IoT networks are more expensive and complex than other available solutions. A current task for communications professionals and engineers is effectively integrating satellite technology with Internet-of-Things networks to create affordable, global network solutions that can deliver service for connected technologies no matter where they are located.

As IoT applications, networks, and usage grow, the amount of data is increasing and faster data processing is needed. According to a 2020 IoT report by Analysis Mason, the number of business-related IoT connections is forecast to grow to over 5 billion connected devices by 2028. ABI Research predicts at least 24,000,000 of those IoT connections will be made by satellite by 2024.

Satellites operating in the Earth's orbit fall into two categories: Geosynchronous Equatorial Orbit (GEO) and Low Earth Orbit. GEO satellites, also called Geostationary satellites, sit about 22,000 miles above the earth, orbit along a path parallel to the earth's rotation, and appear to be fixed in the sky as they move at the same angular velocity as earth. LEO satellites sit between 200 and 1,000 miles above Earth, move much faster because of their proximity to earth, and work together in a web (called a constellation) to provide global coverage.

Geostationary orbit (GEO) satellites were the first satellites launched and were the first used in 1964 for NASA's Syncom III experimental satellite. They move at the same speed as the Earth's rotation, making them effective at providing constant coverage for specific large areas of the earth. GEO satellites have such extensive coverage, it only takes three satellites to cover the entire earth's surface between 70 degrees north and south latitude. GEO satellites are unable to give continuous service at any areas above or below 70 degrees due to the Earth's curvature.

MEO satellites are satellites which sit between 5,000 to 20,000 kilometers above the earth's surface, and are primarily used for Global Positioning Systems (GPS) and other navigation applications. MEO satellites are often used in remote areas where traditional terrestrial networks aren't available but traffic is high, such as for cruise ships, commercial maritime, airplanes, offshore platforms and humanitarian relief operations.

They have an orbit period of two to eight hours, provide low-latency, high-bandwidth data connectivity and make up the middle ground between GEO and LEO satellites. As a result, they have advantages and disadvantages which overlap with the other two satellite types. Their middle-altitude height means constellations require less satellites to cover an area than low-earth orbit satellites, but need more satellites than geostationary orbit satellites. They are cheaper than GEO, but more expensive than LEOs. Overall, they act as the transitionary piece between large, traditional satellite systems and smaller, recently developed LEO satellites.

New satellite systems have begun using IoT open standards. These Low Earth Orbit (LEO) satellites sit between 200 and 1,000 miles above Earth and are capable of picking up long-range cellular signals directly from orbit. The proximity of LEO satellites also makes them effective at providing high-speed, low-latency communications. While they are smaller and cheaper to produce than bigger GEO satellites, their proximity means it takes a constellation of satellites working together to provide global coverage.

Connected car technology is expected to grow tremendously in the upcoming years, with Northern Sky Research (NSR) estimating the international connected car market could grow to over a $1 billion USD by 2029. Gartner predicts that by 2023, automotive will be the largest market opportunity for 5G IoT solutions, signaling a battle in years to come between traditional cellular internet and satellite for auto manufacturer's partnership is offering IoT to customers.

Other data suggests that instead of a choice between terrestrial 5G or satellite networks, future connected cars will use a hybrid model to ensure that automobiles will always have the best service available. This means that a connected car would switch seamlessly between available networks based on availability or data speeds, and also be able to utilize multiple providers to handle separate applications.

Auton successfully tested connected car satellite technology in March 2021, providing internet service to the test vehicle via Iridium's satellite constellation. Research shows that while terrestrial networks currently provide the majority of service for connected cars, satellite is more stable and better suited to providing continuous connectivity regardless of location of the vehicle.

Satellite IoT providers have already begun offering satellite network service for transportation and logistics applications. While there are existing technologies and solutions in the market such as GSM, proprietary radio and wide area network (LAN/WAN), they can not promise uninterrupted connectivity for tracking shipments and assets regardless of weather, environment and range of goods traveled. Satellite IoT also offers a wealth of new asset data, allowing companies to analyze patterns and determine the most efficient transportation paths, routines and maintenance schedules.

There are many areas in the world where people live and work, but do not have regular access to internet access. One potential application for Satellite IoT is to provide service to ATMs and banking terminals in underdeveloped areas or areas without stable connection such as the Asia-Pacific. While developing the infrastructure needed for terrestrial networks could be difficult, satellites can connect rurual areas to banking tools.

IoT satellites have been implemented into the cargo and transportation industries, as well as energy markets related to agriculture. Agriculture IoT applications are expected to become one of the highest growth prospects for IoT, and due to achieve increasingly outsized returns moving forward. Northern Sky Research's M2M and IoT via Satellite 11th Edition report estimates that the number of service units for agriculture applications will rise from 130,000 in 2019 to over 790,000 in 2029, with animal tracking, heavy equipment and meter reading driving growth in small satellites. Smallsats are estimated to make up over 63% of the growth in agriculture satellite IoT applications. 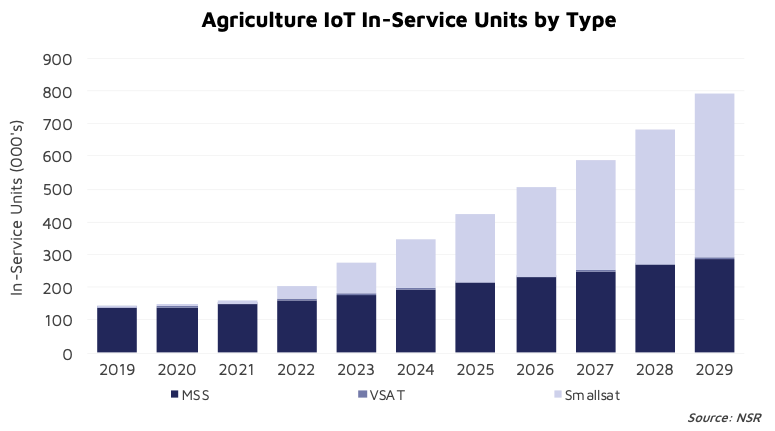 While small, LEO satellites are viable options for individual farmers, who can afford the lower price points of smallsat terminals, larger legacy satellite providers such as Iridium and Inmarsat are already offering precision agriculture applications for large animal populations within a 15 kilometer radius. Partnerships with OEMs including John Deere, Caterpillar, CLAAS and CNH Industrial are key opportunities for satellite providers looking to further integrate IoT technology into large machine use.

Both smaller, LEO satellites and traditional, larger GEO satellites are expected to grow in agricultural usage. Additional expected use cases for the satellites include rainfall, moisture content, fertilization and plant growth data collection and tracking.

The rapid expansion of IoT-enabled devices and advancements in satellite data transfer technology is leading many startups to try competing with existing providers.

This less frequent servicing significantly reduces the service's cost, but creates data relay latency for customers, which could make it impractical for some uses.

The FCC announced in December 2020 they are awarding USD $9.2 billion in funds to 180 companies to incentive them to provide broadband services to unserved and hard-to-reach areas of the US. The program awarded $885,500,000 in funding to be used to support Starlink, a satellite internet network being formed by SpaceX, which is expected to consist of thousands of LEO satellites to deliver high-speed internet anywhere on Earth. The company won subsidies to bring service to 642,925 locations across 35 states.

Capella Space is building a commercial radar satellite constellation. Its headquarters are located in San Francisco, California and it was founded in 2011.

GomSpace is a Sweden-based supplier and manufacturer of satellite solutions and products.

Hiber is a nanosatellite manufacturer and operator.

Kepler Communications is a company that has a focus on satellite production and communication networks.

Lacuna Space is a satellite IoT provider run by the European Space Agency.

Lynk is a SMS and satellite IoT network provider.

Myriota is an Australia-based internet of things company.

OneWeb is a UK-based satellites provider.

Sat4m2m develops a forefront IoT platform at the convergence of Space IoT and LPWA devices for disruptive and interoperable services for Industrial IoT.

Sky and Space Global is an Australian nanosatellite company focused on IoT networks.

Swarm Technologies is a nanosatellite manufacturer and operator.

Iridium Communications, spun-off of Motorola in 2001, is one of the largest satellite network providers and currently operates a USD $3 billion network constellation of sixty six satellites since launching IoT data services in 2006. Bryan Hartin, Iridium’s Executive VP of Sales and Marketing, said IoT services comprised 65% of the company's business in 2020, including real-time voice and narrowband data networking services with speeds up to 2.4 Kbps.

Iridium has a list of verticals ranging from aviation safety and heavy equipment OEMs to voice chat. Caterpillar and Sumitomo currently embed Iridium IoT modules into new equipment and retrofitted older models, allowing tracking and IoT services for heavy machinery working in remote locations such as the desert or the rainforest. Although the majority of the companies' IoT services offer 2.4 Kbps data service, Iridium plans to expand its satellite services to fill the gap between 2.4 Kbps and high-end broadband services between 70 Kbps and 1 Mbps.

Eutelsat is another major legacy provider currently operating and increasing launches into the satellite IoT market. The company renewed a major contract with Sky Italia in September 2020, estimated to represent a backlog of about $532 million USD in the multi-year contract. It also guarantees broadly stable annual revenues for Eurelsat in the medium term and shows one of Eutelsat's leading customers is interested in moving forward with their newest technology.

New satellite IoT providers are competing to garner market share from existing legacy corporations that have offered satellite services for years. Iridium began offering satellite voice-chat and narrowband services in 2006, and has seen large increases in its IoT data services. Tim Last, general manager of Iridium’s IoT group, stated that IoT is the company’s fastest-growing business segment and that more than 20% of Iridium’s annual revenue came from IoT data services.

Amazon has begun launching an IoT satellite network, in a push to provide global data coverage they call "Project Kuiper." The project represents is Amazon's goal to launch 3,236 internet satellites into LEO to compete with existing satellite companies and SpaceX's Starlink Network.

A multinational technology company focusing in e-commerce and cloud computing.

Inmarsat is a company that provides global satellite communications

A satellite communications provider in Maryland that focuses on supplying both voice and data connections.

ST Engineering is a global technology, defense and engineering group.

Starlink is a constellation of satellites launched by SpaceX that will orbit in low Earth and provide internet to rural areas.

Growth in the IoT market will be sizeable, but challenges remain for operators

A COMPLEMENT TO CELLULAR?