Interlay (INTR) is a decentralized network designed to connect cryptocurrencies like Bitcoin with DeFi platforms like Polkadot and Ethereum. The Interlay network is being developed as a Polkadot parachain and will be connected to Cosmos, Ethereum, and other major DeFi networks.

interBTC is Interlay's flagship product - bitcoin on any blockchain. An asset fully backed by Bitcoin 1:1 and censorship resistant.

INTR is the Interlay control token. The main purposes of the token:

Participation in management - making proposals for management and voting on them

Commissions and Rewards - Interlay will pay transaction fees in INTR and other digital assets.

The final number of INTRs is not limited, but the following issuance schedule is provided:

2% will be issued subsequently as annual inflation, in perpetuity

There will be no public sale or ICO

Interlay has been community driven since day one

70% distributed to the community as airdrops + block rewards

20% distributed to the Interlay team + early sponsors through gradual unlocking

10% is dumped into the Fund's reserve for ecosystem growth and future development.

10% INTR is given to the community at launch using crowdloan public voting data as the distribution mechanism. Of them:

- 30% liquidity will be allocated at the time of the giveaway

The remaining 90% of INTR will be distributed as follows:

On-chain Treasury - 25%. Controlled by a control protocol that can use funds as needed. These INTRs are reserved for future crowdloan campaigns, LP rewards, ecosystem funding + potential rainy day fund.

Rewards for blocking in Vaults - 30%. Vaults receive INTR as payment for blocking BTC and providing the necessary insurance coverage in DOT and other assets. Early repositories receive more rewards as they take on more risk in terms of protocol maturity.

Staking for voting - 5%. In order to participate in chain governance, INTR holders must lock their tokens using the parachain. Participants receive an INTR block reward proportional to their share in the total INTR blocked for voting.

Exactly 4 years later and the full distribution of the initial supply of 1 billion INTR, the protocol will initiate a 2% annual inflation that will continue indefinitely.

The new INTR will be fully distributed to the community!

Interlay will participate in the Polkadot parachain auctions + support the crowdloan so that the community can vote:

Interlay is a decentralized network dedicated to connecting crypto-currencies like Bitcoin with DeFi platformslike Polkadot and Ethereum. The Interlay network is hosted as a Polkadot parachain and will be connected to Cosmos, Ethereum and other major DeFi networks.

We envision a future where blockchains seamlessly connect and interact: anyone can use any digital asset on any blockchain, trustless and without limitations. We work with Bitcoin, Ethereum, Polkadot, Cosmos and others to expand interoperability, capital efficiency and openness.

Our flagship product is interBTC — Bitcoin on any blockchain. A 1:1 Bitcoin-backed asset, fully collateralized, interoperable, and censorship-resistant, realizing the true free nature of BTC and decentralized finance. Kintsugi is our canary network on Kusama — the innovation hub of the Interlay network.

Clearly, there needs to be a better way to bridge Bitcoin and similar assets. What use is the decentralization of DeFi, if we’re using a centralized bridge to get there? We all know: a chain is only as strong as the weakest link.

Interlay’s interBTC brings decentralization and economic security to custodial bridges. It is based on the XCLAIM protocol, published back in 2018 as a peer-reviewed security paper by Interlay co-founders — with significant practical improvements conceived in the years since then. 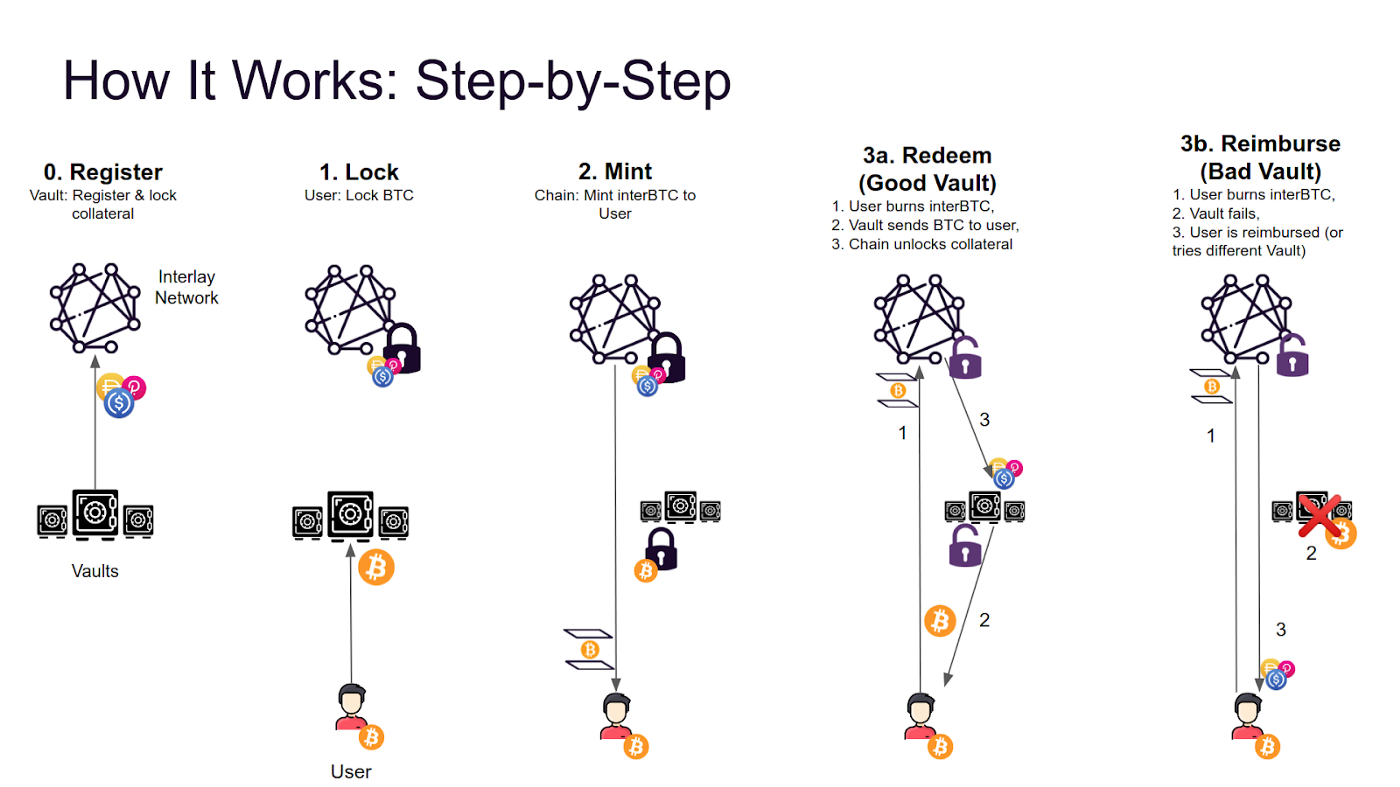 The interBTC lifecycle: from BTC to DeFi and back in a few simple steps.

To mint interBTC, users lock BTC with custodians — so called Vaults. Yet Vaults are not trusted. They must lock collateral in various assets, such as DAI, DOT, USDC, with the interBTC bridge (more precisely, the Interlay parachain on Polkadot). If a Vault steals or loses BTC, their collateral is slashed — and users reimbursed. 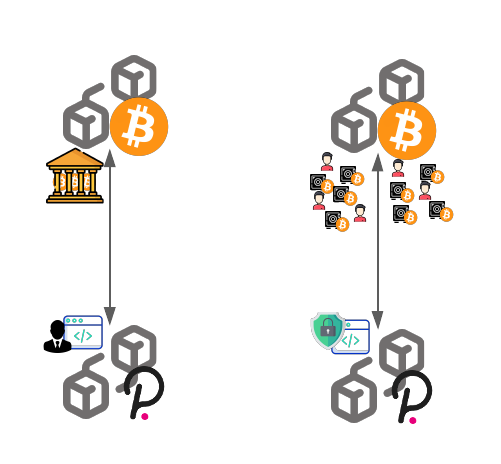 From interBTC to Multi-Chain DeFi Network

As a starting point, the interBTC Core Bridge will be expanded in four dimensions:

With the already announced support for smart contracts (EVM / WASM support on the roadmap), tailored to Bitcoin and any other assets bridged via the Interlay Network, a completely new pallet of products can be built by the community. For example, in the early days, Interlay once built a prototype for a decentralized BTC options platform with new forms of hedging and trust-minimized leverage. This and many more can be built on top of the Interlay Network using an optimized set of cross-chain functions.

The decentralized and trustless nature of interBTC must be accompanied by a simple UX — users should not be forced to choose between security and usability. As such, wallets and on- and off-boarding via exchanges will play an important role in adoption and will be the focus our Interlay’s efforts early on. 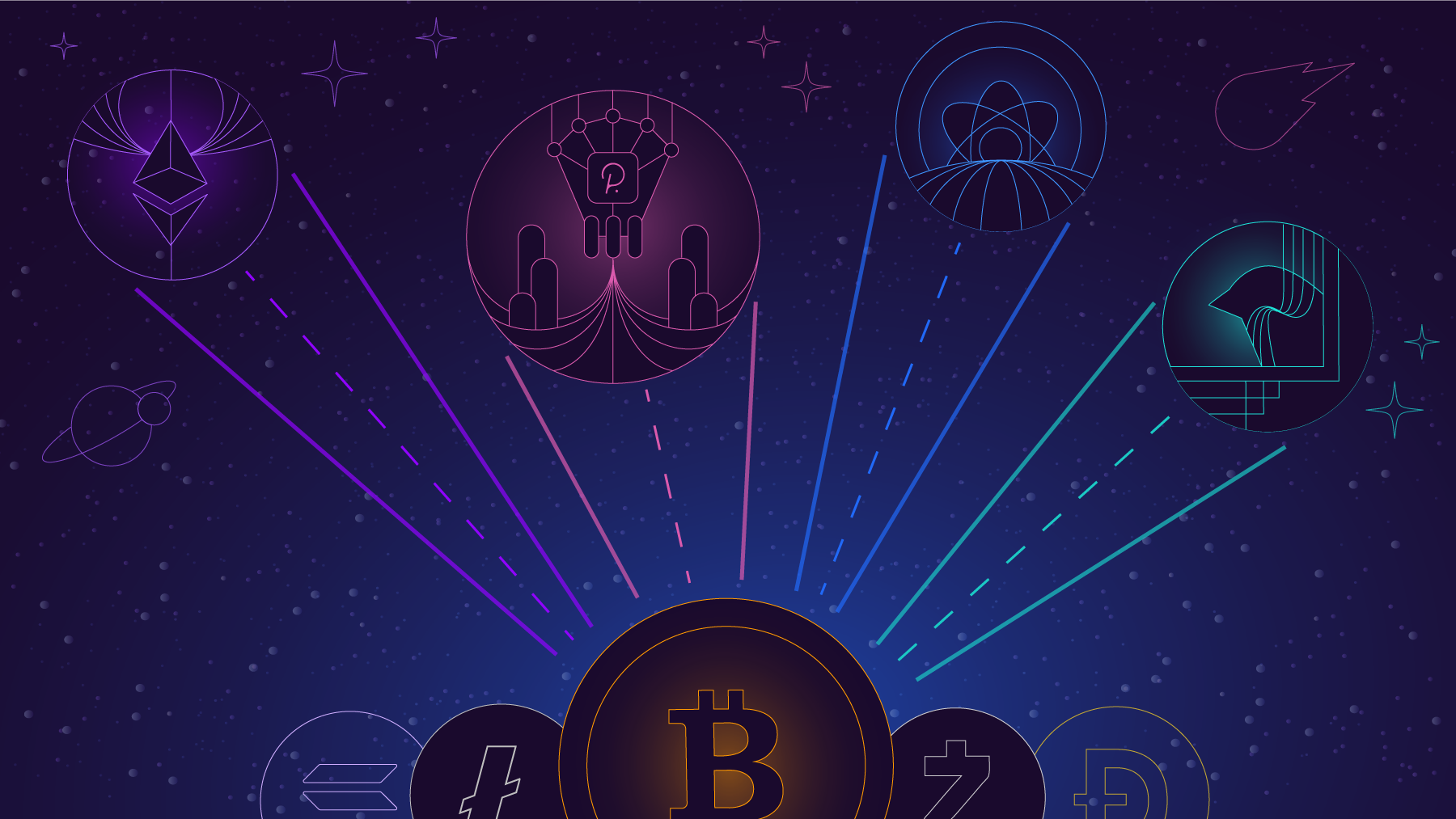 Interlay's 2021: A Year of Development and Growth - Interlay - Medium

The Future of Interoperability - Interlay - Medium