ConstitutionDAO is decentralized autonomous organization (DAO) formed in November 2021 to purchase an original copy of the United States Constitution.

Constitution DA is a group that managed to raise money with the goal of trying to buy one of the original copies of the United States Constitution at an auction, which was held by the high-end auction house known as Sotheby’s. The group managed to collectively raise $47 million to bid for a rare copy of the US Constitution and verified enough funds with Sotheby’s to participate in the auction. The document that was being purchased at the time is one of the thirteen remaining copies of the Official Edition of the Constitution, which is a final draft created for the Continental Congress, according to Sotheby’s.

DAO stands for decentralized autonomous organization, and in the case of the Constitution DAO, Jonah Erlich, as well as a group of around thirty other people, formed the DAO and then offered people around the world the opportunity in which they could donate to it through the usage of the Ethereum blockchain. In return for their donations, they would get the right to vote on what to do next with the copy of the Constitution and what the organization should do in the future as a whole.

Due to the fact that it is based on Ethereum, all of the rules are inscribed within smart contracts on the Ethereum blockchain, and all of the sensitive corporate functions occur through a decentralized as well as automatic way. It is a means of raising a lot of money really quickly for some capital-intensive collective occasion, such as, in this case, purchasing a copy of the Constitution. Due to the fact that all of the money is raised through a DAO, it is all in Ether (ETH), which is the native cryptocurrency token of the Ethereum blockchain. To track who gets a say in the organization, contributors are rewarded with governance tokens, which give them the ability to vote on what happens with the document, assuming they actually end up buying it. Due to the fact that the DAO is set up this way, if they end up losing, the money is then sent back to the contributors. In the Constitution DAO, this token is known as the PEOPLE token.

Investing in a DAO can be more expensive than it initially seems, however. A median donation to the Constitution DAO was $206.26, and to process the donation, many investors paid a substantial amount of gas fees to complete the transaction. Additionally, when the bid was lost, Constitution DAO also needed to send the funds back, which incurred additional gas fees to complete the transaction. This resulted in many small investors losing half or even more of the funds that were initially contributed, and this is one of the main reasons why many DAOs are now set up on newer networks such as Solana. The transaction fees on Ethereum are now simply too high to validate the creation of DAOs.

The US Constitution Sale

The rare first printing of the US Constitution sold at Sotheby's in New York for $43.2 million, which was a record price for a document or book sold at the time of the auction. However, unfortunately for the Constitution DAO, the buyer ended up being the hedge fund manager Kenneth Griffin, who will loan the document to the Crystal Bridges Museum of American Art in Bentonville, Arkansas, with the goal of providing it for the public exhibition.

The bids were made in person through representatives who bid anonymously on behalf of the potential buyers. The bidding rocketed to $30 million and then ticked up million by million throughout the following minutes, where two representatives ended up going back and forth. However, nobody knew which of the representatives were bidding on behalf of the Constitution DAO, and in the group’s Discord, people were spamming guesses about which one of the two was on their side. A few minutes after the bidding was over, the Constitution DAO organizers posted an official update where they stated that they had not won the bid.

Kenneth Griffin, who is the CEO of the multinational hedge fund Citadel, ended up outbidding a group of 17,000 cryptocurrency enthusiasts from across the globe who crowdfunded the Constitution DAO as a means of buying it. However, the printing of the Constitution was last sold in 1988, when a real estate developer as well as collector S. Howard Goldman bought it at an auction for $165,000 at the time. Any proceeds from the sale will benefit a foundation established by Goldman’s widow, Dorothy Tapper Goldman, to further the understanding of the constitutional principles.

Constitution DAO replied through a tweet, where they said the following: “We showed the world what crypto and web3, onboarding thousands of people in the process, including museum curators and art directors who are now excited to keep learning. We were the first DAO @Sothebys has ever worked with, but we're sure we won't be the last one.” 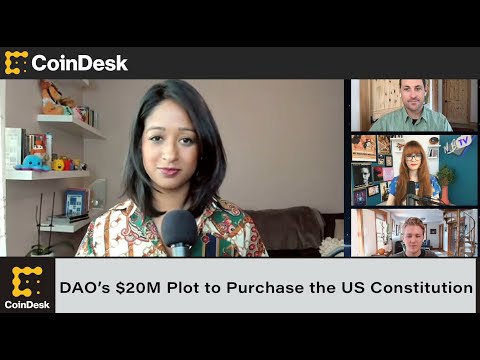 The story of US Constitution DAO, on Coindesk

Constitution DAO originally started out as a joke on the Twitter social media platform; however, over time led to being a real bid in an auction to buy a copy of the US constitution. DAO structures are in their infancy today, and what most of them do is facilitate a voting process. Everyone that holds the token for a DAO is able to vote, where they can suggest a proposal. All of the token holders get to vote on the proposal. It's currently as simple as that. However, there are more complicated and interesting mechanisms being worked on in the DAO world.

If the Constitution DAO succeeded in the process of purchasing the US Constitution document, then the DA had plans of determining the future of the document through voting based on the governance tokens passed out to contributors, which were distributed through the utilization of the Ethereum blockchain. However, due to the loss, the DAO had to deal with the logistical issues surrounding the return of the $47 million they had raised in Ether (ETH).

The History of The Decentralized Autonomous Organization (The DAO)

The decentralized autonomous organization (the DAO) was a means of operating a venture capital fund in the crypto and decentralized space. Due to the lack of any centralized authority, users could expect a reduction in the costs associated with it, and in theory, access to more control from the viewpoint of investors. At the start of May of 2016, a few members within the Ethereum community announced the inception of the DAO, which was known as the Genesis DAO.

This DAO was built as a smart contract within the Ethereum blockchain, and its coding framework was deployed open-source by the Slock.It team, which deployed it under “The DAO” name by members of the Ethereum Community.

The DAO had a creation period, where anyone was allowed to send Ether (ETH) to a unique wallet address, and in exchange for doing so, they would receive tokens on a scale from 1 to 100. The creation period was an unexpected success and managed to gather 12.7 million Ether (ETH), which at the time was worth $150 million, and made it one of the biggest crowdfunding events within the crypto sphere at the time. This proved to be a platform that would allow anyone with a project to pitch their idea to the crypto community, with the hopes of receiving funds from The DAO. Anyone with DAO tokens could essentially vote on the plans and could receive rewards if the projects turned a profit.

In May of 2016, a paper was published that noted a number of security vulnerabilities associated with The DAO and ended up recommending to investors in The DAO to hold off from directing The Dao to invest in projects until many of these issues were resolved. At this point in time, an Ethereum developer on GitHub put out attention towards a flaw relating to the recursive calls, and on June 9, Peter Vessenes blogged about it, who is the founder of the Blockchain Foundation. Fixes were proposed and were awaiting approval by the members of The DAO on June 14 afterward.

On June 17, 2016, the DAO experienced an attack exploiting a combination of vulnerabilities, including the recursive calls, which resulted in the transfer of 3.6 million Ether (ETH), which was a third of the 11.5 million Ether submitted to The DAO at the time, valued at $50 million. This resulted in a hard fork of the Ethereum network, with the goal of moving the funds in The DAO to a recovery address where they could be exchanged back to Ethereum by their original owners. The ones who carried on using the un-forked Ethereum blockchain created what we know today as Ethereum Classic.

However, lessons were learned from the mistakes originally put in place by The DAO, so the Constitution DAO ended up with a high level of success and no vulnerability flaws, despite failing to buy the US Constitution document.

Over the years, DAOs have been created to run venture funds, distribute money to nonprofits, and lend and borrow digital coins while also earning interest through decentralized finance (DeFi) or decentralized applications (dApps).

ConstitutionDAO: The Failed Project that Shook the Crypto World

ConstitutionDAO: The Good, The Bad, and The Ugly