Celgene Corporation is an American biotechnology company that discovers, develops and commercializes medicines for cancer and inflammatory disorders. It is incorporated in Delaware and headquartered in Summit, New Jersey and was founded in 1986 by Robert Harris and Sol Barer. The company's major product is Revlimid (lenalidomide), in combination with dexamethasone for the treatment of multiple myeloma patients. Revlimid is also approved in the United States for the treatment of patients with transfusion-dependent anemia due to Low- or Intermediate-1-risk Myelodysplastic syndromes (MDS) associated with a deletion 5q cytogenetic abnormality with or without additional cytogenetic abnormalities. Revlimid is sold through proprietary risk-management distribution programs to ensure safe and appropriate use of these pharmaceuticals. Vidaza is approved for the treatment of patients with MDS. Celgene Cellular Therapeutics, a subsidiary, is a public cord blood bank. 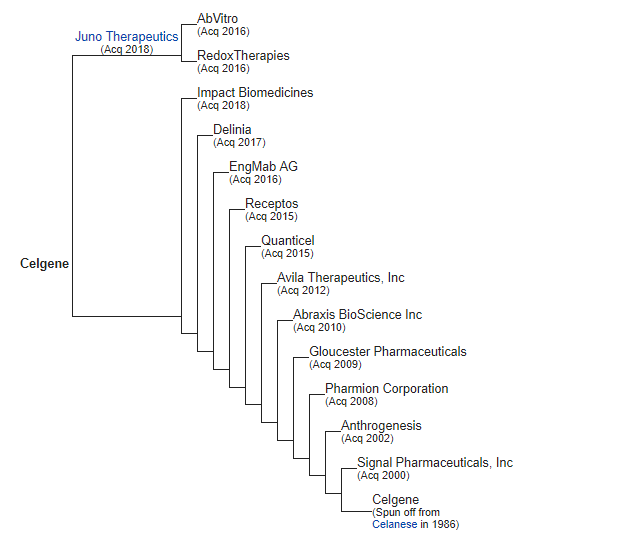 Celgene has acquired 14 organizations. One of their acquisitions was Juno Therapeutics on Jan 22, 2018. They acquired Juno Therapeutics for $9B. The intellectual property of Celgene includes 585 registered patents primarily in the 'Medical Or Veterinary Science; Hygiene' category. Additionally, Celgene has registered 342 trademarks with the most popular class being 'Pharmaceutical, veterinary and sanitary products'. Celgene has made 55 investments. One of their investments was on Feb 7, 2019, when they invested $60.8M in HiberCell.

In the first major pharmaceutical deal of the year, Bristol-Myers Squibb said on Thursday that it would buy Celgene, which makes cancer drugs, in a cash-and-stock deal valued at $74 billion.
Celgene agrees to pay up to $7 billion for the biotechnology company Impact Biomedicines, to enter market for blood-disease drugs.
Celgene agrees to pay $280 million to settle claims that it marketed Thalomid and Revlimid for unapproved uses.