Zeno Semiconductor is a developer and licensor of memory and logic technologies, intended to provide scaling paths for semiconductor devices. These technologies are manufacturable on mainstream CMOS and FinFET fabrication processes, without the need for proprietary materials or equipment.

The company's developed memory consists of small SRAM capable of fitting in the space of a single MOS transistor, to allow users to develop new paths to scale semiconductor devices, and to increase these semiconductor power to performance characteristics. Zeno Semiconductor has been awarded more than fifty patents for its technology. The company was founded in 2010 by Yuniarto Widjaja and is headquartered at Sunnyvale, California. 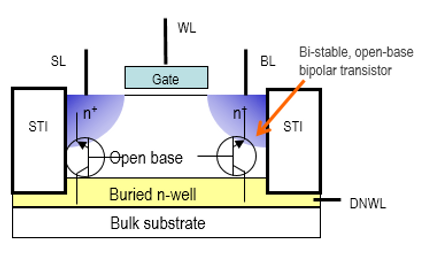 Zeno's 1-transistor Bi-SRAM (bi-stable, BiCMOS) is intended to provide a static memory cell with a 5 times smaller cell size than other Bi-SRAM provides. The memory is bi-stable, which means it does not require refresh operation, and is compatible with CMOS logic processes. The bi-stable characteristic is obtained through the intrinsic, vertical, open-base bipolar transistors. The technology has been demonstrated at 28 nanometers, in 2015, and at 14 and 16 nanometers, in 2018.

Zeno's bit-cells used in the Bi-SRAM memory cells are 0.025 square microns when cast in 28 nanometer CMOS, compared to the usual 0.127 square microns, and is 37 percent smaller than Samsung's 10-nanometer FinFET SRAM bit-cells, at 0.040 square microns. The cells can be used in 3D FinFET or fully-depleted silicon on insulator planar fabs. And they can maintain their size or scale to small sizes at more advanced nodes.