The decentralized oracle that is true to the censorship resistant nature of blockchains.

Witnet is a decentralized oracle protocol that focus on providing reliable data to “autonomous” smart contracts — those that require a high degree of tamper resistance and should not leave space for manipulation. The Witnet network runs its own blockchain and relies on the WIT token for incentivization of autonomous nodes that resolve data request. Witnet can power most DeFi primitives like price feeds, stablecoins, synthetics, etc., as well as acting as a reliable source of randomness for creating uniqueness in NFTs. 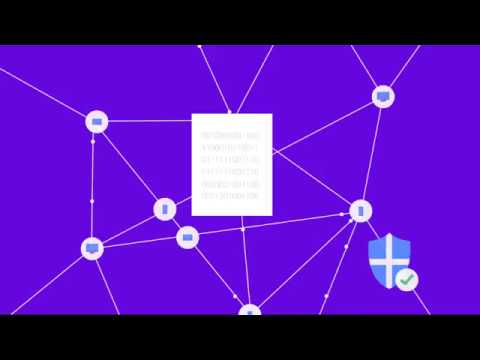 Smart contracts are not what you were told

In recent years, blockchain technology has promised to revolutionize business with "smart contracts" that, unlike paper contracts, cannot be broken.

These smart contracts are simple programs coded to automatically manage the transfer of assets between two or more parties and can be executed without trust. Once deployed, no one can stop them from doing exactly what they were programmed to do. They are subject to their own source code and censorship is not possible.

This is a really powerful idea. If you can write a smart contract that:

1. implements the logic of the agreement and

2. automatically fulfills the points of the contract (for example, transfers the asset from Alice to Bob, depending on the outcome of the event);

then you have a contract that can be applied and leaves no room for challenge.

Blockchain oracles and their problem 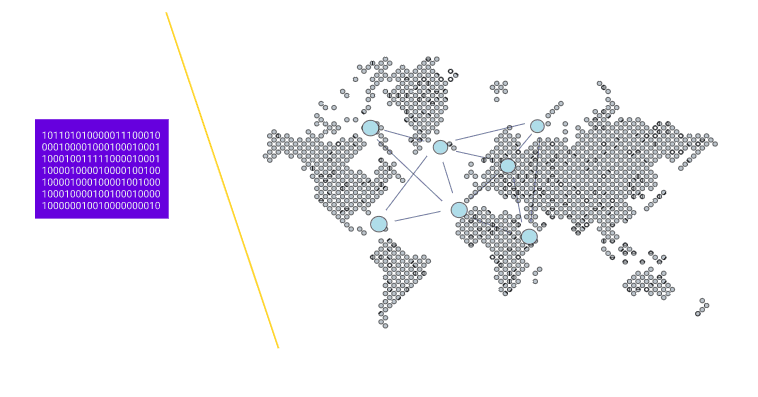 Given that smart contracts must be fully deterministic 1 to ensure that all nodes execute the same code, they do not support input from non-deterministic sources such as APIs or websites.

As a result, smart contracts are largely isolated from the rest of the Internet, which drastically reduces their transformative potential. After all, the effectiveness of a program depends solely on its source code, but also on the input it receives from interacting with the outside world.

Of course, as the creator of a smart contract, you can create a method that allows specific parties to act as an "oracle" by bringing in information from outside when needed. However, this undermines the insecure nature of the smart contract. If any single entity is trusted, then you have a single point of failure that can be attacked or corrupted.

Smart contracts connected to the real world will never be completely insecure and reach their full potential until we have ways to supply them with information in a distrustful way.

This is often referred to as the "oracle problem".

The Witnet protocol aims to create an overlay network that connects smart contracts to any online data source in a decentralized, trustless manner. These sources include, but are not limited to, sports scores, stock prices, weather forecast information, and other blockchains.

The protocol achieves this through a distributed network of peers, colloquially referred to as witnesses, who earn WIT tokens as a reward for receiving and securely delivering web information to smart contracts. That is the Oracle Decentralized Network (DON).

More precisely, we outline the Oracle decentralized network as a computer network made up of nodes (computers running certain software) that communicate and operate as peers according to an agreed upon protocol:

1. gain knowledge about information that is external to the network,

2. check and agree on the accuracy of the information received,

3. and to provide verified information to other applications or networks that may need it.

The bottom line is that a significant number of randomly selected anonymous peers extracting information from one or more sources can come to a single truth about the data they received if most of them are interested in honestly reporting the received data and apply a common consensus algorithm that resolves inconsistencies. .

This Oracle Decentralized Network (DON) maintains and propagates a blockchain data structure that serves as a common ledger for the protocol to operate. Witnesses are also responsible for verifying transactions on the network and combining them into blocks that are periodically added to the block chain.

The protocol was designed to be as decentralized and fair as possible, so the weight of each witness on the network does not match their computing power. Instead, the likelihood of each witness being assigned tasks or finding new blocks is directly proportional to their reputation as an honest and reliable node operator.

Of course, the so-called miners are not real people sitting in front of a computer doing tasks coming from an internet overlord who orders them to use their web browser to go to a certain website and take a picture or copy some text they need to report. In fact, miners are simply computers that run software (Witnet-rust) that automatically accepts and performs a number of tasks without the owner of the computer having to do anything else but install it.

Witnet is committed to providing verifiable and accurate data queries in a completely decentralized and trustworthy manner. To do this, numerous randomly selected anonymous nodes extract information from one or more sources and combine this information into a single truth. A general consensus algorithm is then applied to resolve inconsistencies.

The data received, validated and delivered using the Witnet protocol is trustworthy (no central verification) because it comes from anonymous, randomly selected nodes and therefore not coordinated, who have an interest in staying fair and competing for rewards.

In addition, the integrity of this data is guaranteed by a consensus algorithm that identifies fraudsters who are punished.

The progressive reputation protocol plays a central role in keeping each participant active and honest by creating short, medium, and long-term incentives for them to adhere to the protocol and not interfere with the data they transmit.

NB: Witnet's goal is not to detect fake data, but to guarantee an exact match between what is published on the Internet, regardless of its veracity, and the data that is transferred to smart contracts.

The Witnet protocol runs a single-purpose blockchain with a token called WIT that relies on a P2P network. The nodes in the network are called witnesses, and the WIT token incentivizes them:

-Receiving, validating and delivering data from any public API;

-Mining a block that will be added to the blockchain;

-Be a bridge node and connect the Witnet protocol to other protocols like Ethereum. 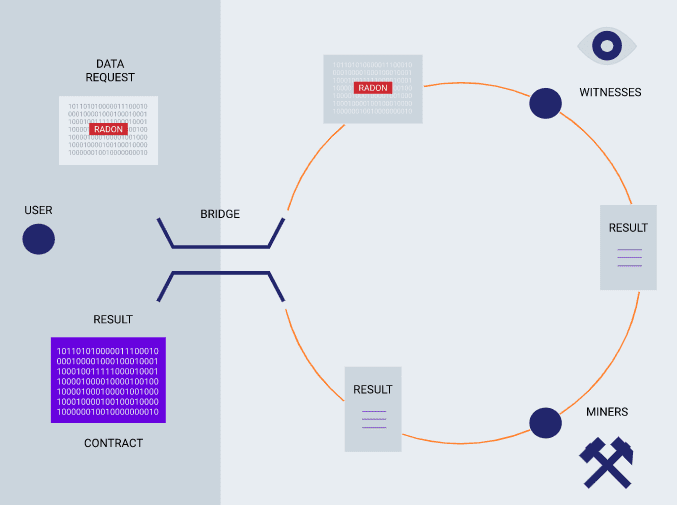 Other projects rely heavily on ERC-20 tokens on the Ethereum blockchain to incentivize oracles to solve problems. This fact will hinder their viability until Ethereum's scalability issues are resolved.

Also, Witnet's master key is the reputation system. Such a mechanism would be difficult and expensive to implement on other smart contract platforms. And, last but not least, mining rewards subsidize the cost of requesting data in the initial stage of the protocol.

After a data request is published, nodes are randomly selected (via a reputation system validation, see Consensus for more details) to extract data from the API specified in the data request, validate the result, and deliver it to the intelligent system.

-Get: Get information that is external to the network.

-Confirmation: check and agree with the accuracy of the information received.

-Deliver: Provide verified information to the smart contract specified in the RAD request.

RADON is a declarative language responsible for coordinating the search, aggregation, counting and delivery of data in strict accordance with the requirements of queries. More information about data requests can be found here.

Each witness submits a hash of the statement as a commitment - the statement itself will be published when the other appointed witnesses also accept their obligations.

A flow with three APIs and two nodes allowing data request is shown in the following diagram: 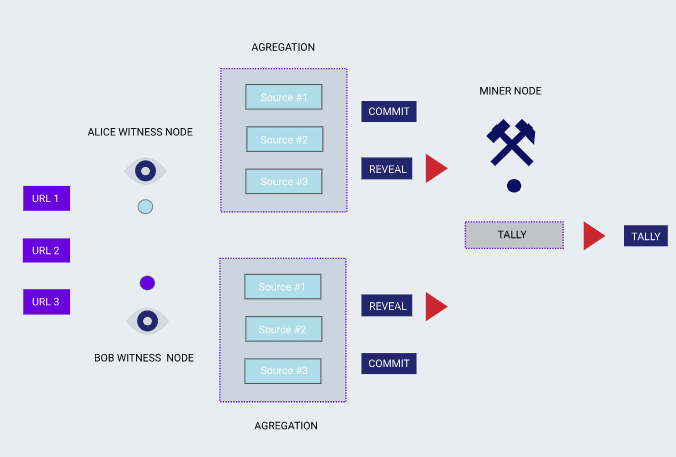 As with most blockchain structures, miners are the nodes in charge of adding blocks to the block chain. These nodes are selected using the Proof of Conformity described here. Thanks to the reputation system, barriers to entry are lower than other oracles, since new nodes do not need to invest a significant amount of money or invest in expensive equipment in order to be eligible to process data requests or mining. This fact encourages new nodes to join the network and thus promotes decentralization.

The consensus mechanism is based on the reputation system. Instead of Proof of Work (PoW) or Proof of Stake (PoS), a node is selected probabilistically based on the reputation score it received when resolving data requests. As a result, any node has a chance to earn WIT tokens without having to wager big or buy expensive hardware, as is the case with PoW/PoS. Witnet is an adaptation of the Byzantine Fault Tolerance algorithm. Nodes using a cryptographic sorting scheme secretly calculate their right to perform tasks (mining, tracking data requests), that is, they calculate their proof of fit (PoE). Such a proof is later verified by the rest of the nodes in the network. Among the elected reporters of the block, the block proposed by the partner with a higher reputation is accepted (if it is valid).

The most common attacks targeting PoW and PoS consensus mechanisms on blockchains have been carefully analyzed in recent years, but how does a reputation-based blockchain protect against these attacks? You can find specific explanations on our Medium blog, but in short:

-Sybil Attacks: The reputation system works very well against this attack as it requires the sybils to work online in order to gain enough influence. In addition, an additional fee is required when solving a data request, which makes the attack uneconomical.

-Eclipse attacks: To prevent an attacker from monopolizing all connections of a node, a P2P grouping system was implemented.

-Majority Attacks: Witnet's implementation ensures that an attacker will need 51% of the total reputation to perform a majority attack. This is an extremely unlikely scenario, even if the reputation is combined.

Witnet uses its own blockchain with its own token called WIT. WITs are earned by witnesses while resolving data requests and mining blocks and are used to encourage honest and trustworthy behavior throughout the network.

Regarding the distribution of WIT:

70% will be mined by witness nodes through block rewards that decrease over time.

30% will be minted in the early stage block (the first block in the chain). They will be given to early participants (2017 pre-sale participants; the Witnet Foundation; and those who helped create Stampery 2).

Mined tokens will be issued as follows, subject to change: the number of WIT generated per block starts at 1000 and will decrease geometrically, with a 50% decrease every 875,000 blocks, or approximately every 2.5 years. Each of these periodic cuts is known as a "halving". As a result, the total number of WITs generated by the issuing mechanism will never exceed 2,500,000,000 minus the pre-assigned 30%.