AnRKey is a social gaming platform that combines DeFi and eSports gaming for users. AnRKey X is your NFT crypto platform to play, purchase and stake unique blockchain based NFTs to win valuable rewards. 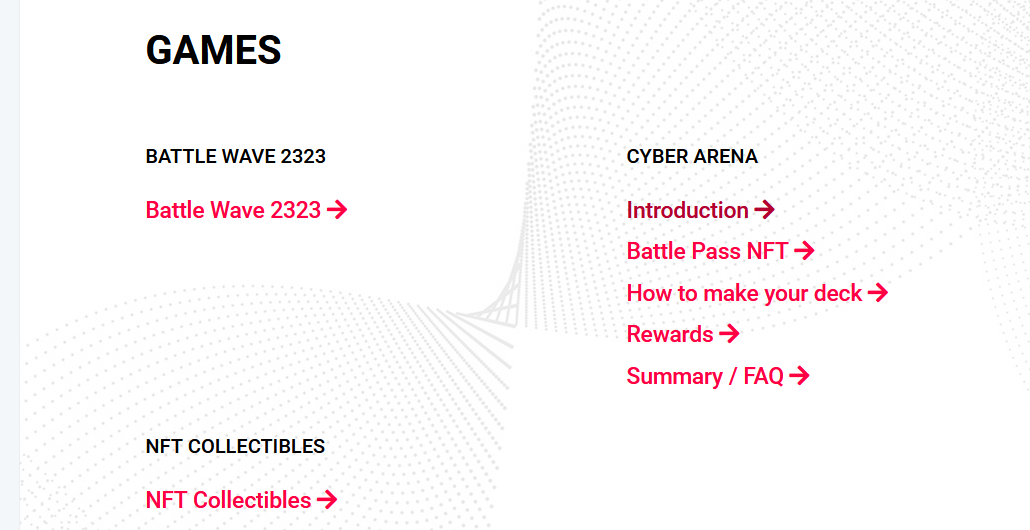 CYBER ARENA is a PVP Battle Card Game with game-play inspired from Hearthstone and Magic the Gathering - but with some unique twists. Players build their deck of game cards (NFTs) from characters in the AnRKey X universe and battle against other users.

All games across the AnRKey X ecosystem are interconnected with stories and game-play. Whatever team you are part of in Battle Wave 23232—step into the Cyber Arena for one-on-one battling against opponents to achieve victory in the arena, which also strengthens your team in Battle Wave 2323 .

Governance - Stake to Gain Influence of the gDEX Protocol Economy:

3rd party developed Dapp games are approved by the community

Users share in a portion of gDEX Protocol fee revenue

2.5% of $ANRX is available for community development, game Dapp developers and gaming NFT asset creators to launch their own products on our gDEX platform, incentivizing growth of the ecosystem.

AnRKey X aims to empower the billions of gamers around the world for the first time to share in the value they create by incentivizing all participants to earn real money via $ANRX tokens. You can think of AnRKey X as a social network of decentralized gaming. Participants become owners in the AnRKey X social gaming economy by playing, building, and selling games and gaming NFTs, and monetizing their game play by accumulating $ANRX. Users can not only earn rewards, but actually grow the value of their rewards ($ANRX) over time through social cooperation to play together, compete, and win games.

The mission of AnRKey X is to create an ecosystem that is owned and governed by our growing community of users. This enables the most democratic and profitable conditions for all participants to retain and grow their earnings through gaming. By decentralizing gaming and using NFT gaming items, AnRKey X creates an engaging and financially rewarding ecosystem perfect for mainstream adoption.

The $ANRX token (aka arcade coin) is the foundational economic unit of the gDEX Protocol, incentivizing actions towards collective rewards and rights ownership. For the first time, users become stakeholders in a democratized economy where they can participate and grow earnings through the production and utilization of tokenized assets.

$ANRX is a medium of exchange to trade those assets, creating utility value for the token, while simultaneously functioning as a proxy for their price valuation. At the same time $ANRX is used as a reward value driver for the production and utilization of tokenized goods and services. Tokenized ownership rights are acquired through $ANRX in a cooperative manner and equitably distributed among the ecosystem’s users.

Version 2 of Cyber Arena, and a completely new arena for the battles

Arena Revamp, with full animations across the game and all visual effects upgraded

1v1 Grudge Match - put your money where your mouth is!

Mercenary Market - make your NFTs work for you

Further development of The gDEX Protocol

BattleWave 2323 becomes the first game built upon the gDEX platform

$ANRX to BSC Bridge and Trading

Upgradeable NFTs. Metadata now can be modified, allowing for later game improvements and valuable utilities such as stats, upgrades, and combining NFTs

Arena Revamp, with full animations across the game and all visual effects upgraded

1v1 Grudge Match - put your money where your mouth is!

Mercenary Market - make your NFTs work for you

Version 2 of Cyber Arena, and a completely new arena for the battles

ANNOUNCING an Exclusive Partnership NFT and Syrup Pool with QuickSwap!