5ireChain: a 5th generation blockchain to lead the next Industrial Revolution

No one can deny the fact that blockchain technology facilitated the creation of some of the biggest assets and products in the world. It created a paradigm shift in financial markets, proving why crypto is a better alternative to fiat currency. We see numerous projects launching with impressive concepts and underlying frameworks. But they ignore an important aspect associated with blockchain networks: sustainability. They also are mainly driven by the economic element of any technological advancement, but never for the service of humanity.

To change this narrative and solve the sustainability problems of blockchains, 5ire is developing a platform based on Nominated Proof-of-Stake, Proof-of-Donation, and Proof-of-Benefit. The 5irechain is believed to be a fifth-generation blockchain that is expected to solve problems such as back-end control of blockchains, high scalability, and cross-chain compatibility. Outside of its tech and ability to solve crucial challenges in crypto, 5ire is also fully committed to aligning its activities with the UN 17 Sustainable Development Goals.

The team believes 5irechain can be a big part of the 5th industrial revolution, while still creating a positive impact on the planet. In this article, we will break down various aspects of 5ire — from use-cases & features — to on-chain architecture & governance. Let’s get started.

5ire is a distributed high-performance computing network based on blockchain technology to enable SDG-related measurement, development, management & investment. 5ire’s mission is to accelerate the implementation of the United Nations’ 2030 Agenda for Sustainable Development and align itself to create a platform to leapfrog from the current 4th Industrial Revolution to a 5th Industrial Revolution.

5ire is co-founded by Pratik Gauri, Vilma Mattilaand Prateek Dwivedi. The concept behind the for-benefit economy started with Pratik, who has been working in the social impact sector for more than 10 years. He is also constantly promoting the sustainability goals of the UN and aims to make a difference in the lives of 1 billion people using a 5th generation blockchain. The other co-founder, Prateek has more than a decade of experience in internet marketing.

It has a tier 1 high-performance distributed computing platform with lavish runtime functionalities oriented towards sustainability at the consensus level.5ireChain is the first truly sustainability-driven platform that incentivizes enterprises to be more sustainable & innovative, just by making the world a better place. Actions in the 5ireChain adhere to the philosophy of the industrial revolution, creating a net positive impact on the planet.

5ire aims to create an ecosystem that is driven only by its users. And to help deal with the sustainability problem of the blockchain network, it is using a reward distribution mechanism and runtime logic. This not only helps create a sustainable network in the real world but also enhances participation through fair incentives.

It is unique that 5irechain can upgrade its logic without worrying about the complexity of hard forking. And as it is empowering these upgrades, it follows a governance mechanism that ensures all network participants have an equal say.

If blockchains lack interoperability, then they cannot sustain long term. Recognizing the future lies in cross-platform, 5ire is enabling different types of bridges like smart contract and substrate to remove entry barriers and provide accessibility to all corners of the world

Community-driven projects will eventually succeed. It is because no single entity will be given the power or authority to make significant changes to the network. 5irechain adopts a similar governance mechanism that allows everyone to democratically participate in the network and propose changes.

The Architecture & Consensus of 5ire 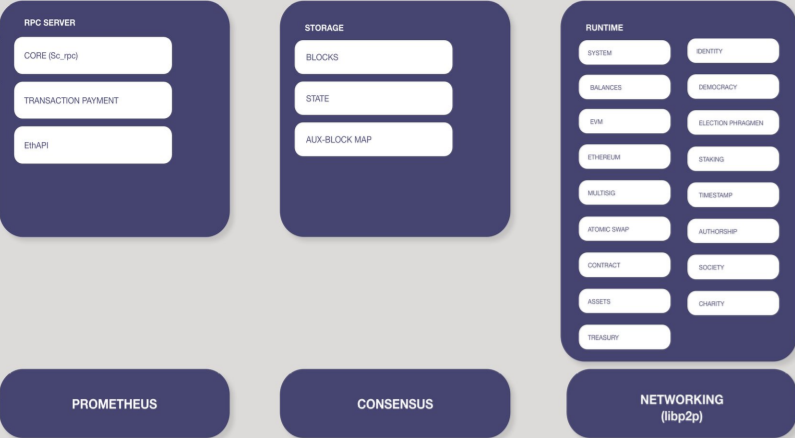 5ire decided to follow a hybrid consensus with BABE and GRANDPA. As a result, the blockchain becomes more efficient in block generation and proving finality. But that is not what led to the ultimate creation of 5ire. The main 5ire components that drive the platform are its consensus mechanisms. 5irechain is one of many blockchains adopting NPoS. This mechanism is proved to be superior in terms of validator selection and security. The team also believes it gives a fair representation of all the actors in the network.

With proof-of-stake as its core element, 5ire offers a multi-layer staking mechanism that is going to have a positive social impact. The reward mechanism implemented with proof-of-benefit helps shift the focus from for-profit to for-benefit. As the network actors promote 17 UN sustainable development goals, they will be getting their fair share of rewards. 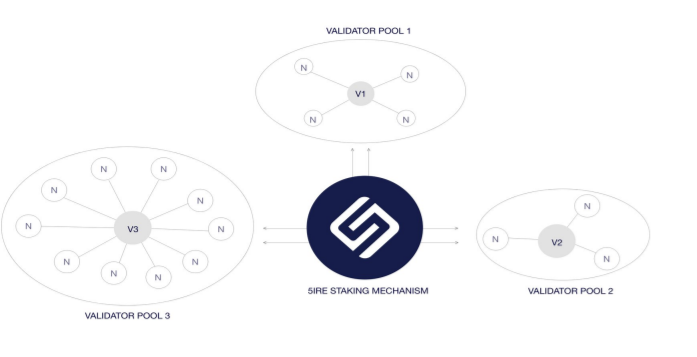 We mentioned earlier that 5ire is trying to accentuate sustainability and how it is their global approach. Well, the back end or on-chain part about sustainability also depends on the consensus. The PoD and PoB mechanisms will ensure proper governance and democracy within the 5ire ecosystem. And that will be key to sustaining and being an example for future projects in this space.

5ireChain Toolset: Provides developers with a range of services that are available in both code and API form. It’ll be used by developers to have complete control over their application via a toolset that is open-source that provides all of the features that they need to build applications on top of 5ireChain.

5ire Explorer: A high-precision explorer which can quickly scan through the 5ire network. In addition to searching for Block, Extrinsic, Event, and Account, it provides a user-friendly interactive experience in Staking, Governance, and other modules.

5ire Wallet: A Blockchain Wallet that provides an easy and secure way to send, receive and store 5ire tokens and its underlying ecosystem cryptocurrencies.

5ire Exchange: A Blockchain Exchange that will enable the trading of tokens and digital assets in a compliant and regulated environment. The platform is built with technology from proprietary partner 5ixlab and has been designed to change the way companies interact with their investors through the use of blockchain technology.

One of the biggest use cases 5ire wants to see come to fruition is E-governance. The platform can be a bridge to legacy systems and facilitate bringing powerful features of blockchain to the real world. The off-chain oracles and workers will help in implementing this idea. The team also believes this can remove inefficiencies in the systems and guarantee strong security.

The next trend in urbanization is developing smart cities. And blockchain technology can accelerate its growth. So, 5ire wants to be a difference-maker with its future-proof economic and technological models. As 5irechain will be cross-platform compatible, it will help with interoperability and cross-chain communication.

The centralized naming systems are not going to last, considering the increasing amount of MITM attacks, DNS tunneling, and hi-jacking. This is where 5ire can carve out a fresh service for its users. A naming service powered by 5irechain offers superior performance, security, and more importantly, brings decentralized governance to the DNS hierarchy.

With FB’s rebranding to Meta, it is clear we are going to see massive adoption by other companies, and the concept of metaverse will go mainstream. And for a metaverse to be successful, it requires various interoperable features and VR solutions. 5irechain can provide just that and more. The hybrid approach with rewards and donations will build a strong community around any metaverse.

The ticker symbol and name of the native token is $5ire. It has a total supply of 1.5 billion, and the 5irechain network started off with an initial market cap of $1.75 million. The tier one smart chain also has a token-burning mechanism to control the inflation rate. The utility of this token doesn’t end there. It can be used for staking and incentivizing validators and nominators. It will also be used for data storage. The 5ire tokens will be used as rewards to incentivize nodes for storing data. Tokens also play a role in the slashing protocols designed to disincentivize attacks or adversarial behaviors.

It is not just a utility token but an ecosystem of blockchain solutions that organically grow to become a multi-chain realm for building the 5th industrial revolution, investors are assured of their inclusivity in the ecosystem by getting rewarded for each active participation they provide to the ecosystem, while Proof of 5ire assure to reward validators nodes based on their sustainability best practices, 5ire want to prove a thesis “You can be abundant while doing more good”.

The 5ire team managed to raise $10 million in an ongoing private sale. The first private sale round of $1 million was led by Marshland Capital. The angel round closed in 28 minutes, raising close to $200k. The second round of private sales was $1.5 million. Sanctum Global Ventures and Diamond Hands put in a combined $1.1 million. The total fundraising amount will be revealed when the private sale is over.

The 5ire team has been rapidly expanding their operations by growing their tech team and hiring twenty new full-time members. They are also onboarding new partnerships, advisory boards, and some other influential folks in the crypto space. 5irechain also acquired Coins91, a crypto exchange based in India, and this is expected to expand the 5ire ecosystem.

Recently, they collaborated with Huawei Cloud and Morpheus Lab for end-to-end infrastructure and to accelerate a sustainable growth effect for 5ire. Beyond this, the 5ire marketing team is attracting more big VCs who can help 5ire penetrate the crypto community further.

The roadmap for 5ire is divided into seven parts. In the initial stages, the main focus is on building the right team and implementing the applications built on the Testnet. In the third stage, 5ire will launch smart contracts and decentralized identity solutions. The community also can start mining and become the first validators and nominators.

Once the smart contracts go live, the next steps would be to create improvement proposals and an open standardization proposal for the 5ire network. In this stage, 5ire promises to index 5 out of 15 UN SDGs. And by the end of six stages, all the UN goals should be indexed. The platform will also have cross-chain compatibility by that time. In the final stage, we have protocol updates and aim for enterprise adoption.

5ire is the first-ever blockchain to conceptualize the for-benefit paradigm. And it is believed to provide sustainability and transparency to a non-profit sector worth over 2 trillion. The opportunity to make a difference with blockchain technology is certainly present in this underserved sector. And 5ire being a fifth-generation blockchain, will add a new human element along with other concepts like verifiability. However, we have to see it to believe it. And there are so many features and services planned for the 5ire platform. So it is better to monitor the development and see how the project is maturing through each phase in the roadmap. If you want to deep dive more, I suggest reaching out to their community and actively participating in different activities. You will surely gain better insights.

5IRE - THIS FINANCE CRYPTO PROJECT WILL BLOW UP!