Form of radar which is used to create images of an object and large areas with high resolution through cloud cover, disparate weather states, and differing levels of vegetative cover and biomass.

Synthetic-aperture radar (SAR) is a type of active data collection for fine-resolution imaging where a sensor produces its own energy and records the amount of that energy reflected back. This differentiates it from passive data collection such as optical imaging systems which use reflected energy from a source such as the sun. This also allows SAR systems to image a surface through clouds and inclement weather and in total darkness. The uses of SAR imaging include things such as high-resolution wide-swath observation, multi-azimuth information acquisition, high-temporal information acquisition, 3D terrain mapping, and image quality improvement.

The basic principle of SAR imaging is to emit an electromagnetic signal toward a surface and record the amount of signal which returns and the delay in the return. The strength and time delay of the return is then translated into imagery. The wavelengths SAR uses to observe surfaces are microwaves, typically in the range of a few to tens of centimeters. 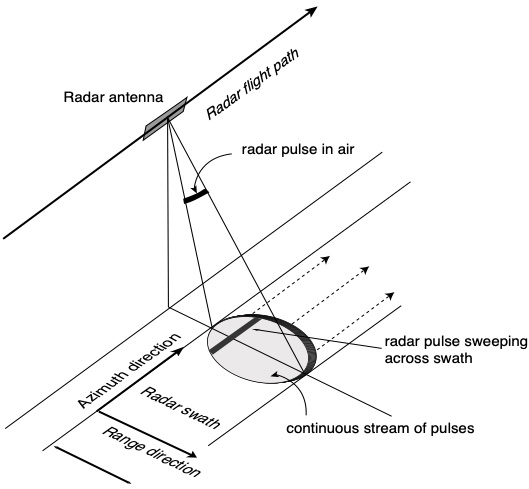 Graphic representation of a SAR system moving along a flightpath to simulate a larger antenna.

Using microwaves creates a problem for radar imaging systems. This problem results from the size of the radar antenna needed to get a spatial resolution of 10 meters from space, which would need to be about 4,250 meters long. SAR solves this impracticality through movement. Through the use of smaller antennas and continuous transmitting pulses across a flight path, SAR is able to simulate a larger antenna. The radar works to image every point on the ground in its path many times while the distance from a specific point to the radar constantly and predictably changes. The change in distance is encoded in the received pulse's phase as a phase history. By compensating for the phase history of each pulse through computer processing, a synthetic aperture is created instead of a real aperture. The resulting image resolution can in turn be improved to a theoretical one-half of the antenna's diameter.

The wavelength of a sensor determines the penetration depth of the transmitted signal into the layers of a terrain surface. The longer the wavelength, typically the deeper the penetration. The different wavelengths of SAR are often referred to as bands with letter designations.

Used for biomass and vegetation mapping and assessment. In a more experimental phase for SAR.

The ability for different wavelengths to penetrate through surface layers have offered scientists and archaeologists the ability to uncover lost cities and urban-type infrastructures hidden by dense vegetation or desert sands.

Visualization of the penetration possibility of different wavelength bands in the case of vegetation.

Images created by SAR can be rendered into recognizable terrain maps, but there are differences between optical imagery and SAR imagery. SAR imagery is a non-literal imagery type because it does not look like an optical image and has to be interpreted. The interpretation of SAR images is not straightforward either do to the non-intuitive side-looking geometry and other phenomena unique to SAR images.

Shadowing is caused in SAR images when an object blocks the path of direct radiation of the radar beam. The difficulty with shadowing in SAR imaging is that shadows cannot be seen because there is no return signal. 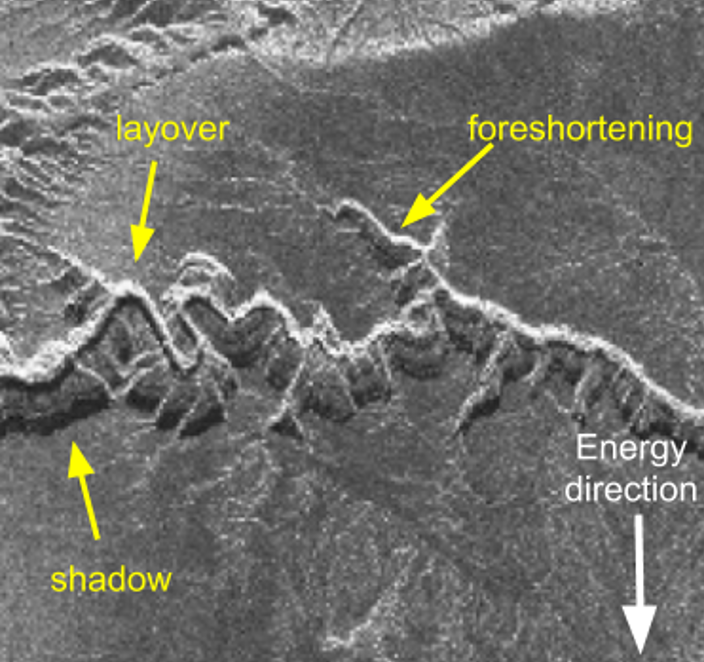 Because SAR systems are side-looking, backscattered returns are arranged in the image based on how far the target is from the antenna along the slant plane. This causes geometrical distortions in the imagery, which can result in tall objects with a slope, such as a mountain, to appear steeper with a thin bright edge appearance.

Layover is an extreme example of foreshortening where an object is so tall that the radar signal reaches a second point before it reaches an earlier point. This causes the returns from the second point to be placed on the image close to the sensor and obscure the first point as if the top is overlaid on the foot of the mountain.

The images returned from SAR systems are monochrome. The intensity of the pixels in the radar image are not indicative of color, rather they depend on the amount of energy the SAR sensor transmitted, the material properties of the object, the physical shape of the object, and the angle from which the object is viewed.

Different surface parameters that affect pixel brightness are the surface roughness with respect to the system wavelength and scattering material. If the material is smooth the radar beam is reflected according to the law of reflection, known as specular reflection. If the surface is rough the radar beam is scattered in all directions, known as diffuse scattering. Varying surface roughness results in varying amounts of diffuse scattering and varying pixel brightness.

The reflectivity of a material in respect to electromagnetic waves also determines pixel brightness. Metallic objects and water are more reflective, but since they are usually smooth and flat, the radar beam is reflected away from the sensor. 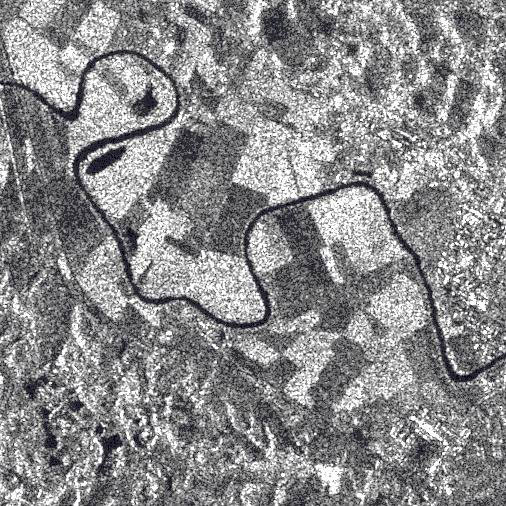 Example of speckle in a SAR image.

The spatial resolution of the radar sensor on a SAR system defines the minimum separation between the measurements the sensor is able to discriminate. And resolution introduces speckle. Speckle is a scattering phenomenon which happens when the spatial resolution of the sensor is not capable of resolving individual scatters. Unlike noise, which is random in nature, speckle can be reproduced if the conditions are identical. And because of the reproducibility of speckle, it can be removed through multi-looking. 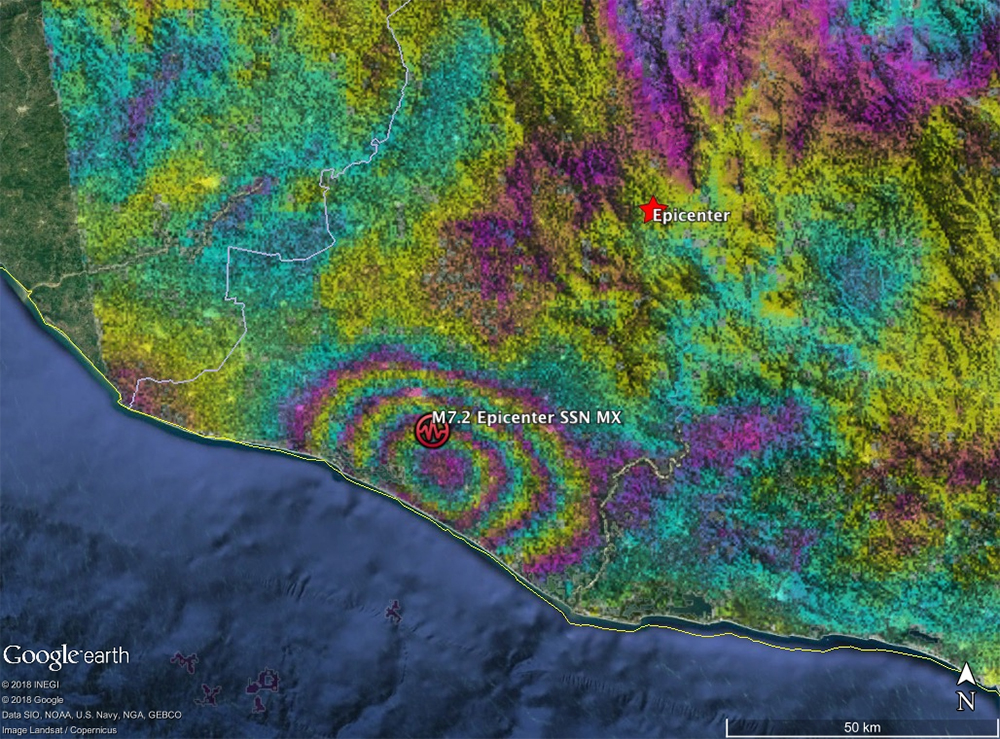 Interferogram data showing earthquake fault slip on a subduction thrust fault causing up to 40 cm of uplift of the ground surface.

SAR data enables an analysis method called interferometry (InSAR) which uses the phase information recorded by the SAR sensor to measure the distance from sensor to target. When at least two observations of the same target are made, the distance with additional geometric information from the sensor, can be used to measure changes in land surface topography. The measurements can be accurate up the centimeter and used to identify areas of deformation from events like volcanic eruptions and earthquakes.

Synthetic aperture radar has been used in geospatial investigation. This includes flood mapping, disaster management, deforestation, and activity monitoring. The Climate Corporation and France's agriculture ministry both use SAR data and imaging to help farmers understand crop yields and insure against weather-driven losses. And the United States Air Force has begun testing synthetic-aperture radar for bomb damage assessment to understand and evaluate if bombs hit and destroy targets and the level of damage. Information from SAR systems can also aid disaster relief organization by offering understanding of better evacuation routes and better routes to distribute food and medical aid.

For surveillance, military, or civil purposes, SAR can monitor activity regardless of weather and can penetrate heavy vegetation to see below canopies.

Can detect small changes in areas to understand coastal erosion and coastline changes over time; similarly can be used to detect changes in sea ice over time and monitor glaciers

The U.S. Air Force and military have tested the use of SAR for bomb damage assessment and for use of imaging target areas from long range and regardless of weather

Can detect differences in measurements over time can reveal land displacement, such as sinking ground caused by mineral extraction

Can detect differences in surface reflection can forecast snowmelt and distinguish between wet snow, dry snow, and no snow

Synthetic-aperture radar (SAR) was suggested by Carl A. Wiley in 1951 while he was working at Goodyear, Arizona (which later became Lockheed Martin Corporation). SAR was developed as a military reconnaissance tool and solution for the need for 24-hour, all-weather aerial remote surveillance. In 1953 the University of Michigan's "Project Wolverine" offered plans which later developed into a practical SAR system. This early system stretched the analog processors of the 1950's with its processing demands. Emmett Leith suggested the optical processing of the data could satisfy the processing requirement; a method which worked.

The required data processing amounted to calculating cross-correlations of received signals with samples of the forms of signals expected from amplitude sources, which large digital calculators of the 1950s were unable to calculate. This led Emmett Leith to develop an optical correlator which processed the images from the early SAR systems like diametrical slices of circular optical zone plates. The overlays then let light pass through in certain areas and block it in other areas to develop a single focused image of an area.

By 1957, airborne SAR systems were being used.

In 1974, the National Oceanic and Atmospheric Administration and engineers from Jet Propulsion Laboratories began using satellites to carry SAR systems for oceanic observations. The SAR wavelengths make it sensitive to small surface changes, making it ideal for monitoring surface wave patters and currents. And SAR can measure displacement accuracy to within several millimeters. In 1978, the launch of Seasat was the first civilian application of SAR and offered a new tool for scientists studying the earth. Seasat operated until it was disabled by a short circuit in its power system in later 1978. In the same year, the first digital processor was developed by Canadian aerospace company MacDonald Dettwiler (MDA). When the digital processor was used it took many hours to create one swath of image from each run of a few seconds of data. While the system took longer than the optical processing, the image quality was better.

Since 2017, the ability to launch multiple small satellites on different launch vessels from companies such as SpaceX or Virgin Galactic, rather than relying on government launches, more SAR systems, including planned constellations, have been developed with lower costs. These constellations promise SAR data and imaging to more organizations faster, such as France's agriculture ministry which previous to 2017 found SAR imagery challenging because of the time it took to receive the data. New companies, cloud computing, and analytical tools to process SAR data provided by companies including Maxar Technologies and Airbus Defence and Space offer broader appeal to SAR.

The mission will use various forms of optical and radar imaging to create the best geographic maps of Mars.

An Introduction to Synthetic Aperture Radar: a High-Resolution Alternative to Optical Imaging

The Applications and Benefits of Synthetic Aperture Radar

What are SAR satellites and how do they work?