Radar is an object detection system based on radio waves. 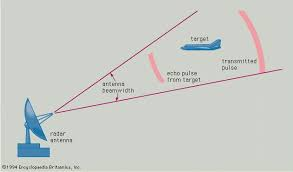 Example of how radar transmits and receives signals.

Radar is a type of electromagnetic detection system used to detect, locate, track, and recognize objects at considerable distances. This works by transmitting specific electromagnetic waves towards an object and observing the echoes returned, with the calculation of those returns determining the presence, location, and velocity of the object. Radar has also been able to obtain an object's size and shape. Radar systems tend to consist of a transmitter, a receiver, an antenna, and a connected electronics system to process and record data. The transmitter is used to generate short bursts. The antenna is used to focus the pulses into a beam or to direct the radar. And the receiver detects the energy reflected back from the beam. Measuring the time delay between the transmission and reception of the echo allows for the calculation of an object's distance from the radar and thereby determines its location. 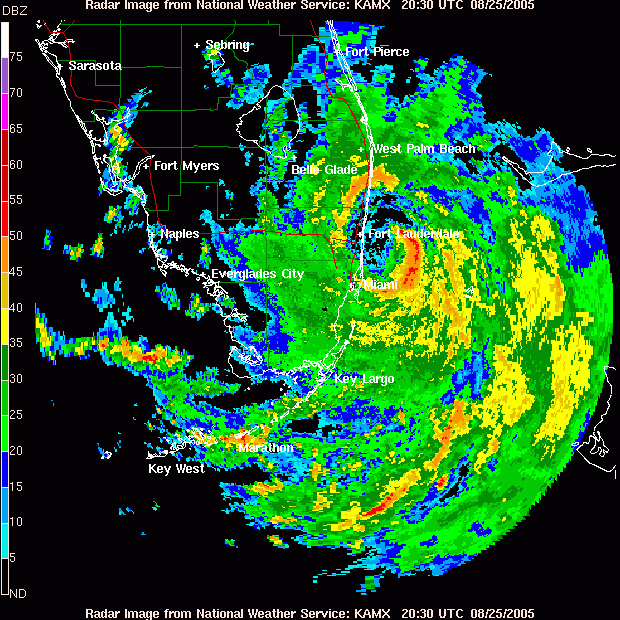 Radar is distinguished from other types of sensing devices, such as optical and infrared sensing devices, due to radar's ability to detect objects at great distances, under adverse weather conditions, while being continuously able to determine the range or distance with greater precision than those other systems. Another important part of radar is the display. In a radar system, once the signals are returned, they can be computed and plotted on a display screen. This display screen will interpret the signals depending on the type and application of the radar.

Radar works by transmitting a pulse of microwave energy at an object. And a second part of the radar system listens for a bounce or echo from an object, which then provides information about any objects. The time it takes for an echo to return can help to determine the distance at which an object is located. Further, the sharper the beam, the more accurately the bearing of a target can be determined. These echoes can further be analyzed in a function known as signal analyzing. Through signal analysis, a function such as a "target analyzer" allows echoes to be distinguished on a radar screen through color-codes according to their movement. And other functions such as an "echo tail" can allow a radar operator to visualize the movement of an echo.

Distance to a target

The calculation of distance in radar, that being the distance of an object from the radar transmitter, the time (T) is measured between the emission of the wave and the reception of its echo. Since the echo is a round trip of the original wave, calculating the distance (D) requires time to be divided by two. This creates the equation D = 1/2 x cT, where c represents the speed of light, as the electromagnetic waves used by radar move at the speed of light, simplifying the equation as the speed remains constant.

Doppler shift is a phenomenon that occurs when sound is generated by, or reflected off of, a moving object. This is what creates a sonic boom in the extreme case. This can be understood in a common example. If a car moving at 60 miles per hour comes towards a user standing still at one mile away—in a stable environment in terms of air pressure, temperature, and humidity causing the speed of sound to be 600 mph—and honks its horn for the minute it takes to reach the person standing still, the sound will be heard at a 6-second delay. This means the person standing still will hear 54 seconds of the horn honking. While the person driving hears the full 60 seconds of the horn honking. As well, the horn's frequency, and therefore tone, will change as it passes the person standing still.

The combination of echo and Doppler shift, which changes the frequency and tone of the echo, then allows the radar system to determine how fast an object is going and the direction in which the object is going. This is used in sonar, with sound. While radar uses electromagnetic waves which can still have a measured Doppler shift. The Doppler shift also allows ground-based radar systems to understand which items are stable and which are moving.

Radar and the electromagnetic spectrum

Radio waves are a part of the electromagnetic spectrum. The waves produced by the transmitter are microwaves, similar to those produced by a microwave oven. Most radar operates between 400 MHz to 36 GHz, with some exceptions. Generally, the frequency used for the radar system depends on its application, with different frequency ranges offering tradeoffs among factors such as the physical size, transmitted power, antenna beamwidths, and atmospheric attenuation. For example, some radar frequencies will be beneficial for penetrating haze, light rain, clouds, and other atmospheric particulates. While others may be best suited for viewing the surface of the Earth, or below the surface.

The designation of the different bands used by radar depends on different classification systems. For example, the Institute of Electrical and Electronics Engineers (IEEE) prefers a designation developed during the Second World War. This selection was developed to keep frequencies secret. While the North Atlantic Treaty Organization (NATO) has developed a separate and different radar designation classification system. The radar band designations used by the IEEE have also been adopted by the International Communication Union, and many countries have specific regulations to control which bands are available for either military or civilian use.

There are various types of radar that have been developed for different purposes and applications. These purposes and functions tend to inform the classifications of the radar systems. The two most basic types of radar tend to be pulse radar and continuous wave radar. As the name suggests, pulse radar operates on pulsed signals that are used to detect stationary and moving targets. Continuous wave radar uses continuous waves to detect the objects, which uses two separate antennas for transmitting and receiving the signals.

Bistatic radar is a system that is comprised of a transmitter and receiver separated by a distance that is equal to the distance of the expected target. Most long-range surface-to-air and air-to-air missiles use bistatic radar.

A Doppler radar is a form of radar which uses Doppler effect to produce velocity data about an object at a given distance. This is achieved by sending electromagnetic signals towards an object and analyze how the object's motion has affected the frequency of the returned signal. This variation has the capacity to give extremely accurate measures to the radial component of the target's velocity in relation to the radar. This radar has applications in aviation, meteorology, healthcare, among others.

These are radars designed for testing aircraft, missiles, rockets, among others. They give different information including space, position, and time both in the analysis of post-processing and real-time.

The history of radar began in 1885 when Scottish physicist James Clerk Maxwell suggested that radio waves could be reflected by metal objects. In 1888, German physicist Heinrich Hertz set out to prove the theory and discovered these waves did indeed reflect back. For his work, a unit of frequency of the electromagnetic wave was named Hertz after Heinrich Hertz. It would not be until 1904 that the first radar system was developed by German high-frequency technician Christian Hülsmeyer. This was based on Hülsmeyer's experiments into Hertz's work, in which he noticed electric waves emitted and reflected by a metal surface could be used to detect metallic objects. He then developed a device, the telemobiloscope, to measure the transit time of reflected waves. The patent for this was filed April 30, 1904.

In 1922, there were two advancements in the development of radar. One was the suggestion by Guglielmo Marconi, an Italian inventor and electrical engineer, who urged the use of "short waves" for radio detection. The other was a suggestion for the practical use of reflected waves by Dr. A Hoyt Taylor in the U.S. Naval Research Laboratory. The laboratory was experimenting with high-frequency radio communications from one side of a river to the other, when they discovered a significant loss of reception as ships passed between the transmitter and receiver, which led them to conclude radio waves could be used to detect the presence of ships. The technology was developed through the 1930s in part due to the invention of long-range military bombers, which in part required countries to need a system to detect their approach.

Examples of the British radar systems from the Second World War, which used low frequencies and therefore required large antennas.

In 1940, the acronym RADAR was created to stand for RAdio Detection And Ranging by the United States Navy. The invention of radar is often attributed to the British, in part because they operated early radar systems prior to, and during the Second World War, and for their part in the development of radar through the duration of the war. The use of radar by the British was designed to detect and locate enemy ships and aircraft and played a decisive role in the Battle of Britain in 1940, in which the large military radar systems allowed the British to react to air, and potential sea, invasions from Nazi Germany.

Throughout the Second World War, high-level technical exchange agreements among the Allies allowed for the rapid development of radar systems. This included improvements in the range and sensitivity of radars, as the usable wavelengths were shrunk between 1935 and 1940. Further, this development of microwave radar allowed for the development of a cavity magnetron by John T. Randal and Henry A. Boot of Birmingham University. This device was capable of generating microwave pulses and allowed for the construction of smaller and, for the time, accurate radars.

After the conclusion of the Second World War, radar continued to develop, with the developments of monopulse radar, which increased the tracking accuracy of these systems; pulse-Doppler radar, which was a radar system able to detect moving objects through varying weather conditions or clutter created by animals; and phased-array radar, which made it possible to track multiple objects. There also, during this period, came a need to track aircraft possibly carrying nuclear weapons and for these systems to be able to send out early warnings. This led to the development of massive networks of radar to provide these early warnings.

A history of the evolution of RADAR

How radar works | Uses of radar