Quantum radar is an emerging technology that aims to use quantum mechanical properties to improve traditional radar techniques. The technology utilizes a process based on quantum entanglement known as quantum illumination. Quantum radar has potential applications in radar systems for the military as well as ultra-low power biomedical imaging and security scanners.

Traditional radar determines the location and direction of an object by transmitting radio waves or microwaves and measuring the returning waves reflected off the object. This approach can fail in high noise conditions where thermal radiation overpowers reflected signal photons.

Research into quantum radar technology has been ongoing since 2002 by US defense company Lockheed Martin and US Defense Advanced Research Projects Agency (Darpa). In the United Kingdom, a study by defense company Qinetiq is testing the feasibility of using quantum metrology in radar and lidar systems.

China Electronics Technology Group Corporation (CETC) the largest defense company in China claims it has developed a quantum radar system. No evidence has been provided to support this claim and it has been dismissed by experts in the field.

Quantum illumination utilizes quantum-mechanically entangled beams of light. Quantum entanglement is a feature of quantum mechanics where a correlation of quantum states exists between a pair or group of particles even when separated by large distances. 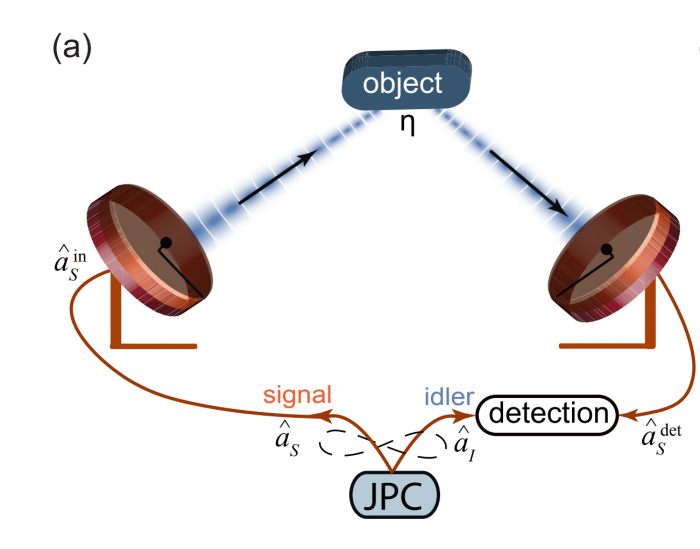 Implementing quantum illumination for radar systems poses many engineering challenges. These include:

A February 2015 paper described achieving quantum illumination after converting visible photons to microwave wavelengths (capable of use in a radar system). The method used an electro-optomechanical converter. This device can generate microwave-optical entanglement for the signal beam and convert microwaves into an optical beam for the detection of reflected photons.

The first quantum radar prototype was designed by an international research team based at the Institute of Science and Technology Austria in 2019. The paper published in May 2020 demonstrated a proof of concept for quantum radar, illuminating a room-temperature object at a distance of 1m. The system outperformed a classical radar system in the same conditions.

In 2016 Chinese state media claimed a team at the Intelligent Perception Technology Laboratory of the 14th Institute in CETC tested a radar system that uses quantum entanglement. The system was able to detect a target at a range of 100km in a real-world environment.

In 2018 CETC announced it had developed a next-generation quantum radar system. Claiming it can detect ballistic missiles and other objects flying at high speed through space.

Experts in the field such as Jonathan Baugh, Seth Lloyd, and Ned Allen have dismissed these claims. Allen stated he believed CETC may have conducted a successful experiment using a quantum radar system. However, the quantum radar generator was mounted on a satellite in space, propagating the entangled photons through a vacuum, not in atmospheric conditions.

The potential increase in sensitivity due to quantum radar could improve the performance of military radar systems. Providing higher definition images of targets, allowing specific models of aircraft, missiles, and other targets to be identified. The higher sensitivity also results in a lower power signal used making it harder to detect by the target. Targets typically detect when they have been spotted by a radar system and deploy jamming systems to interrupt further tracking.

Such a non-invasive property is particularly important for short-range biomedical applications. In the long-term, the scheme could be operated at short distances to detect the presence of defects in biological samples or human tissues in a completely non-invasive fashion, thanks to the use of a low number of quantum-correlated photons. Our method could be used to develop non-invasive NMR spectroscopy of fragile proteins and nucleic acids. In medicine, these techniques could potentially be applied to magnetic resonance imaging, with the aim of reducing the radiation dose absorbed by patients.

Institute of Science and Technology Austria