LeafLink is a New York City and Los Angeles-based company that provides a marketplace for wholesale cannabis.

LeafLink is a B2B wholesale marketplace aiming to streamline transactions between retailers, dispensaries and brands in the cannabis space. Founded in 2016 by Ryan Smith and Zach Silverman, LeafLink grew from $100 million sales from March 2016 to November 2017 to managing over $1 billion per year in August 2019.

Leaflink, by August 2019, was estimated to be processing 16% of all U.S. wholesale cannabis orders. LeafLink connects more than 1,200 licensed cannabis brands to over 3,500 retailers across U.S. and Canada. LeafLink splits its headquarters between New York and Los Angeles. They suggest the split is to build a network where brands are and where brands will be.

In November of 2017, LeafLink raised $10 million. The round was led by Nosara Capital, and included Casa Verde Capital and Lerer Hippeau Ventures. LeafLink planned to use this funding round to expand into new states as legalization continued.

LeafLink's software offers a central dashboard to connect wholesalers to retailers. They charge a monthly fee to wholesalers dependent on the size of the company. Their centralized dashboard allows wholesalers and retailers track all orders, edit orders, analyze sales data and keep track of all sales and purchases. LeafLink vets companies using their platform to ensure they are licensed and operate in a compliant manner. 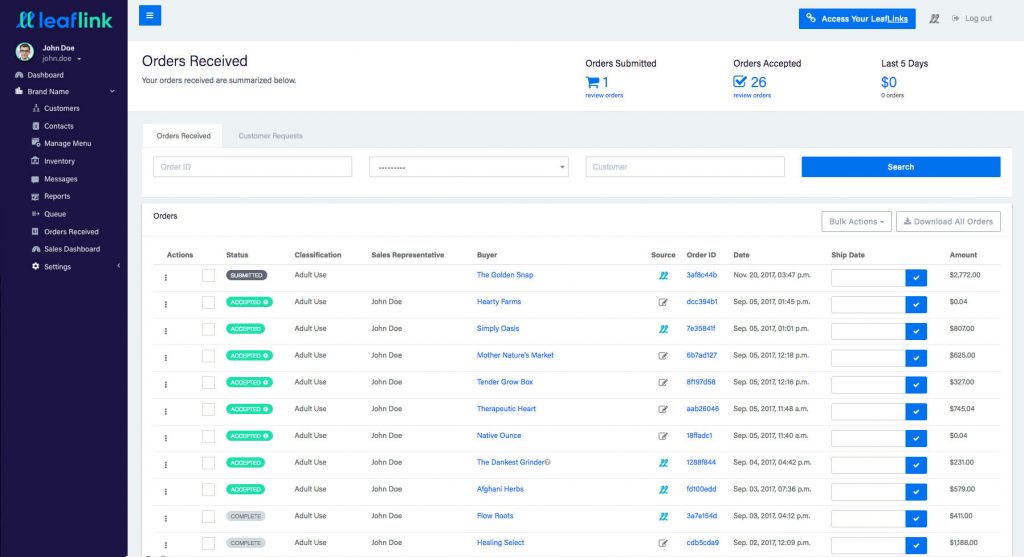 LeafLink's community gives feedback which allows them to add platform features, such as a space for advertising which was requested by their partners in 2018.

LeafLink announced a collaboration with Canopy Rivers, the investment arm of Canopy Growth, in March 2019. The collaboration aimed to grow LeafLink's service internationally. Their initial focus was on the Canadian, U.K. and German markets.

Title
Author
Date
Publisher
Description
LeafLink raises $40m from Founders Fund, others to cultivate its cannabis wholesale market
Matt Burns
December 10, 2020
TechCrunch
LeafLink is today announcing it raised a $40 million Series C financing round, led by Founders Fund with participation from Thrive Capital, Nosara Capital, and Lerer Hippeau. This round of financing brings the total amount raised by the company to over $90 million. This financing round is Founder Fund's largest technology investment in the cannabis [...]