About 19,500,000 people live in the state of New York (the third largest population among the US states - after California and Texas). The average population density in the state is about 159 people per km2 (seventh place in the USA).

People have lived in what is now New York State for more than ten thousand years. In the 16th century, when the first Europeans arrived here, the Iroquois tribes lived in the northern and western regions of New York (from the Hudson River to the Great Lakes). Five of them (Cayugas, Mohawks, Oneida, Onondaga and Seneca) formed an alliance known as the Iroquois League, later the Tuscarora Indians, who fled under pressure from Europeans from North Carolina and Virginia, were also accepted into this alliance. In the south of New York also lived non-League Iroquois of the Susquehannock people. 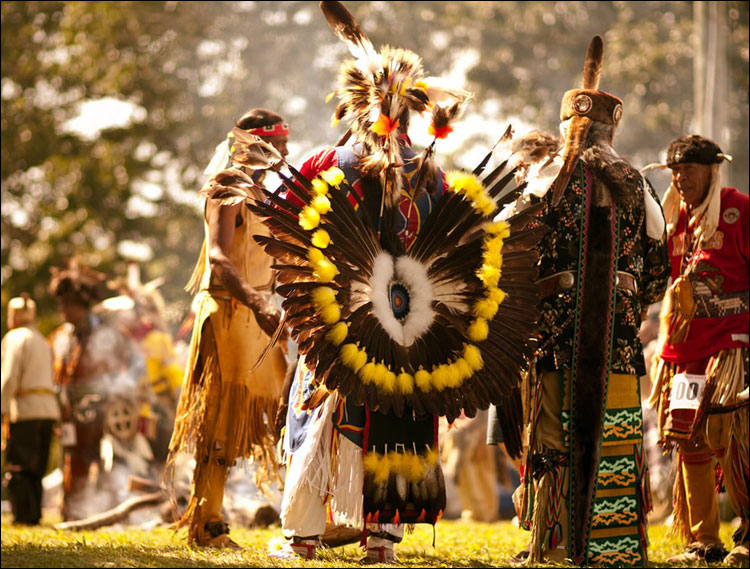 The Algonquian tribes lived in the southeast (the Delaware or Lenny-Lenape, Mohicans and others), it was from their language that many geographical names familiar to us came, including "Manhattan". The Iroquois and the Algonquian peoples were at enmity with each other.

The first European explorer who saw the land of New York was in 1524 the Italian Giovanni da Verrazano (Verrazzano). Being in the service of the French king, he sailed along the coast of America from North Carolina to Rhode Island. In New York Bay, Verrazano met with the Lenny-Lenape Indians, and he mistook the mouth of the Hudson River for a large lake. In honor of the famous pioneer, several bridges in the East of the USA are named: in Rhode Island, Maryland and New York City (connecting Brooklyn and Staten Island).

After gaining independence, the population of New York was divided into "Federalists", who supported a strong national government (they included the majority of New York City residents, and their leader was Alexander Hamilton, the future US Secretary of the Treasury in the government of George Washington) and "anti-Federalists", who advocated greater independence of the states (mainly the population of agricultural areas in the north and west of New York). Only on July 26, 1788, New York ratified the Constitution of the United States of America, becoming the eleventh of the US states. Adirondack Park is a forest reserve in the central part of the state.

Located near the village of Lake Placid, John Brown Farm is the house where the famous abolitionist lived and his grave.

Fort Niagara (near the village of Youngstown) is a military outpost built by the British in the early 18th century.

Steamboat "Columbia" (SS Columbia) - built in 1902 and the only surviving sightseeing steamer that cruised the Great Lakes.

The Croton Aqueduct, which was built in the first half of the 19th century as part of the New York City water supply system.

The Erie Canal, which connected the Great Lakes with the Atlantic Ocean in the first half of the 19th century and laid the foundation for the economic growth of the "Imperial State".

House of Millard Fillmore, 13th President of the United States, in the village of East Aurora.

Fort Ticonderoga (near the city of Ticonderoga on the border with Vermont) is the site of important battles of the French and Indian War and the Revolutionary War.

Manor "Lindenwald" (Lindenwald) near the city of Albany, where Martin Van Buren lived, the 8th President of the United States

Morrill Hall is the oldest building at Cornell University in Ithaca.

House of Samuel Morse, inventor of the telegraph, in Poughkeepsie.

The New York State Capitol in the state capital of Albany.

Niagara is a state park located at the famous waterfall on the border with Canada.

Palisades Park is a scenic area administered jointly with the State of New Jersey along the Hudson River.

Sunnyside is the home of writer Washington Irving in Tarrytown.

US Military Academy at West Point.

About 19,500,000 people live in the state of New York (the third largest population among the US states - after California and Texas). The average population density in the state is about 159 people per km2 (seventh place in the USA).

New York State ranks second (after California) in the United States in terms of the number of immigrants coming here. At the same time, internal emigration from the state is also very high, primarily to Florida.

The largest ethnic (national) groups in the population of New York State:

Ethnic Italians (of whom there are more than anywhere else in America) and Irish make up the majority of the population in the southeast of the state, in the west, in the Great Lakes region, there are more Germans, and in the north there are quite a lot of French Canadians.

The World Trade Center was attacked
The Great Depression Began
New York Ended Slavery
The New York Stock Exchange Began
New York Became the 11th State
The Dutch first settled along the Hudson River in 1624, two years later they established the colony of New Amsterdam on Manhattan Island. In 1664, the English took control of the area and renamed it New York.