HP Teradici, formerly known as Teradici, is a Burnaby-based developer of PCoIP technology for remote desktop infrastructure. The company was acquired by Hewlett-Packard in 2021.

HP Teradici, formerly known as Teradici, is a developer of silicon-based technology for information technology organizations. The company's platform includes technology for secure virtual workspace, through its PCoIP technology, capable of powering local, remote, mobile, and collaborative work styles and systems. Teradici's PC over IP (PCoIP) technology has been used by companies across industries, including media and entertainment, oil and gas, design, finance, government, and healthcare.

Teradici was founded in 2004 and is based in Burnaby, Canada. In July 2021, Teradici was acquired by Hewlett-Packard and provided HP with their PC over IP technology to help HP with their virtual desktop performance. As part of this transaction, Teradici's name changed to HP Teradici to reflect its new role as a subsidiary organization in HP's overall organization.

Previously known as Teradici CAS, HP Anyware is a remote workstation or digital workspace software product offering secured access to digital workspaces. It was developed to continue offering an evolving infrastructure and network to meet ever-changing hybrid workforce demands and to provide flexibility for any host environment or workload. The technology is built on the same technology that previously won HP and Teradici an Engineering Emmy in 2020. 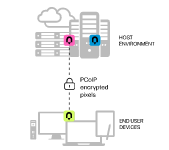 HP Anyware, based on the PCoIP technology developed in Teradici CAS, offers users three software components for deployment, giving users the flexibility to make digital workspaces. These include PCoIP Agents, which can be installed in a Windows, Linux, or MacOS host environment, offering workstations or virtual machines running on the edge, datacenter, private or public cloud, multiple cloud, or as part of a hybrid environment. It offers PCoIP Clients, which can be installed on Windows, Linux, Android, MacOS, iOS, Chrome OS, and related end-user devices. And Anywhere Manager, which can be installed in a host environment or accessed as a service, offering an environment for IT administrators to provide and monitor PCoIP connections and manage user access to shared digital workspaces.

Use cases for HP Anyware include workloads for both simple and complex remote workflows, be they for government agencies, media conglomerates, production studios, financial firms, educational institutions, or design houses. Therefore, the software is developed to meet as many of these industries and their unique needs as possible, including offering high responsiveness, color-accuracy, lossless and distortion-free graphics performance.