Dash is an open source peer-to-peer blockchain based cryptocurrency focused on speed of transaction and privacy.

Dash, originally called Xcoin and Darkcoin (rebranded in 2015), is a cryptocurrency that was created in 2014 by Evan Duffield. Dash supports secure, instant, and private payments that made be made online or in stores around the world.Dash is a cryptocurrency aimed at anonymity. Dash protects your personal data by making transactions anonymous using a network technology developed by the Dash team known as DarkSend. DarkSend was inspired by the CoinJoin project, which was supposed to anonymize Bitcoin transactions.

After the rebranding, Dash began to position itself as an anonymous open source digital currency for the general public. The focus is on security and speed of transactions. All transactions on the Dash network are confirmed using 200 TerraHash of X11 ASIC computing power on over 4,500 decentralized servers around the world. Dash's peer-to-peer network is made of miners which receive rewards for securing the Dash blockchain, and masternodes which are rewarded for validating, storing, and serving the blockchain dash users. 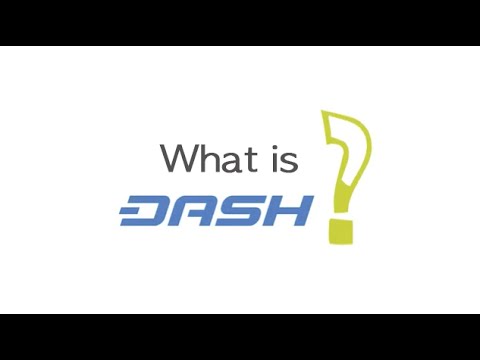 Dash masternodes enable the following services: InstantSend, PrivateSend, Governance and Treasury, and Dash Evolution (an online payment system similar to PayPal). To own a dash masternodes you must be in possession of 1000 Dash which can be proved by signing a message and broadcasting it the the Dash network. Each masternode earns ~8% return on 1000 Dash as of July 2017, but from this date onwards Dash masternode earnings will decrease by ~7% each passing year.

PrivateSend is Dash's method of obscuring the origin of Dash funds. It was officially released in RC4 of the DarkCoin client as DarkSend, and was rebranded to become PrivateSend in May 2016. PrivateSend obscures a Dash users identity by mixing a users inputs with the inputs of two other Dash users, while each user maintains ownership of their Dash coins inside their cryptocurrency wallet. Every PrivateSend happens in 5 steps:

The Dash Core wallet is available for macOS, Linux, Raspberry Pi, and Windows. It supports all Dash features which include:

The Dash Electrum wallet is a fork of Bitcoin's Electrum wallet that does not support PrivateSend or InstantSend (as of February, 2019). It's a light wallet using external servers to index the Dash blockchain to secure a users keys on their personal computers. The wallet uses a method called Secure Payment Verification (SPV) to verify user transactions. SPV only requires block headers and does not need to have all blockchain information.

The Dash Paper wallet is a Dash wallet which allows users to securely store their Dash long term by allowing users to generate, encrypt, and secure their keys to a single Dash address on a clean computer.

Hardware cryptocurrency wallets officially recognized by Dash include Trezor, KeepKey, and Ledger. Dash also recognizes their may be other hardware wallet projects that are made to securely store Dash.

The launch of the blockchain is announced by creator Evan Duffield on bitcointalk forums.

Dash Crypto - What You Need To Know!

Title
Author
Date
Publisher
Description
This Compact PCR Test for Covid-19 Could Give Accurate Results in 15 Minutes
Theresa Machemer
June 1, 2021
Smithsonian Magazine
The speed and ease of the DASH testing platform would be a boon for screening efforts
Dietary Approaches To Stop Hypertension: Beginner's Guide To The DASH Diet
May 20, 2020
NDTV.com
High blood pressure: DASH is a practical approach to control and prevent hypertension. To follow the DASH diet you need eat and avoid certain foods. Here are the basics of the DASH diet you need to know.
Doom Eternal review - no-frills, endless thrills
Jay Castello
March 19, 2020
the Guardian
Red-hot excitement ... Doom Eternal. Photograph: Bethesda
What foods Reduced blood pressure and Constitute the DASH diet
January 17, 2020
Binge Post
The best foods to reduce blood pressure would be high in potassium, calcium, and calcium. These foods include leafy green vegetables, nuts, fruits, seeds, legumes, whole grains, fish, and low carb milk -- and also constitute the DASH diet, which may reduce blood pressure. you ought to avoid foods that are high in sugar, sodium, [...]
Dash cam reviews 2019: Catch the maniacs and meteors of daily driving
Jon L. Jacobi
October 9, 2019
PCWorld
They record what's ahead. Sometimes they record what's behind. Most mark it with GPS (or what's the point?). This is exactly what you need on the mean streets of modern life.
SHOW MORE