Fuller was the second World President of Mensa from 1974 to 1983. Throughout his life, Fuller held 28 patents, authored 28 books, and received 47 honorary degrees. He worked across the fields of architecture, design, geometry, engineering, science, cartography, and education.

While Fuller taught at Black Mountain College in North Carolina during the summers of 1948 and 1949, he began reinventing the geodesic dome. The geodesic dome had been created, built and awarded a German patent on June 19, 1925 by Dr. Walther Bauersfeld, but Fuller was awarded an United States patent. Fuller patented his design in 1954, and is seen as an example of Fuller's ambition to make the most with minimum resources. In the dome, this comes in the lattice structures which are able to withstand heavy loads, harsh conditions, and provide open space inside.

In 1953, Fuller designed his first commercial dome for the Ford Motor Company headquarters in Dearborn, Michigan. The military became one of his biggest clients, using his geodesic dome designs to cover radar stations at installations around the Arctic Circle. 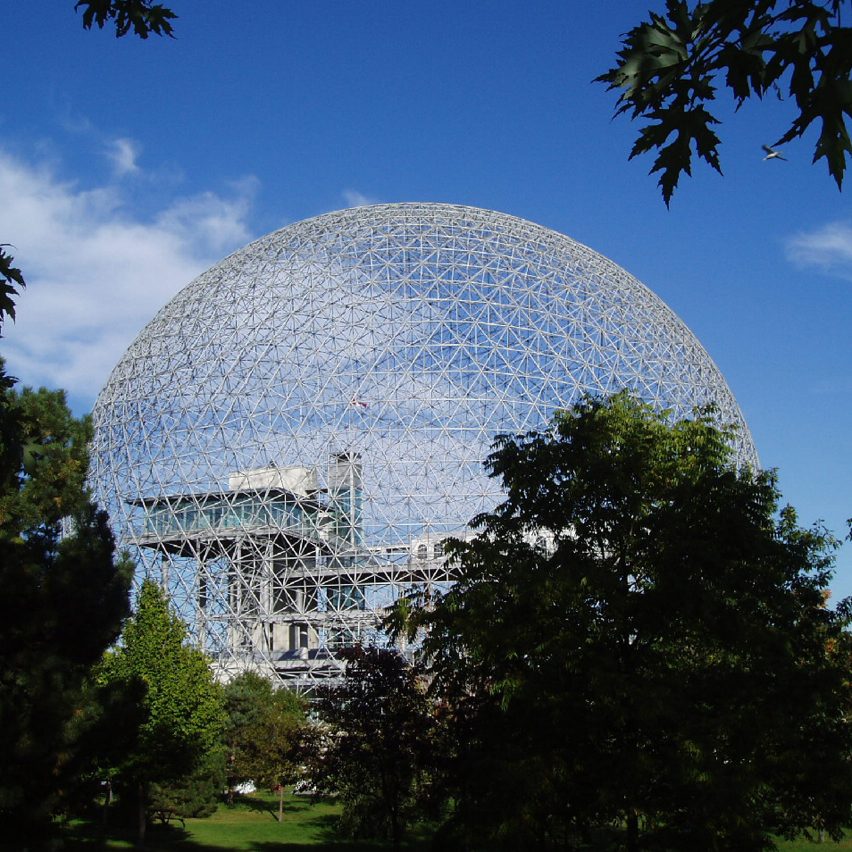 Fuller associated the word "Dymaxion" with much of his work, a portmanteau of the words dynamic, maximum, and tension to sum the goal of his study: maximum gain of advantage from minimal energy input. The use of the word and the design philosophy reflected his growing recognition of the accelerating global trend toward the development of more efficient technology.

Over his career, Fuller designed a series of prefabricated residences called Dymaxion Houses. Although the designs differ, each is made of elements that could be produced in a factory and airlifted to different locations. They were designed to be constructed anywhere. Formed of a central column supporting a domed roof and flooring and a window between. Though the design for the house never became popular for civilian housing, they were used during World War II to shelter radar crews in remote locations with severe climates. 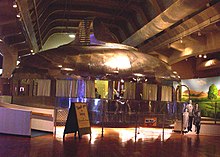 Dymaxion House at the Henry Ford Museum of American Innovation.

The Dymaxion Car was a vehicle designed by Fuller and featured at Chicago's 1933-1934 Century of Progress World's fair. Although called a car, the Dymaxion Car is best understood as a ground taxiing vehicle that could have been designed also to fly, land, and drive. The design explored the ground-taxiing phase of a vehicle. Fuller worked and refined the design of the car, but never made it available to the general public. One of these design iterations included a three-wheeled vehicle capable of tight turns.

The car's body work was designed for increased fuel efficiency and top speed. The platform featured a lightweight hinged chassis, rear-mounted V8 engine, front-wheel drive and steering through the third wheel at the rear. This offered the chassis 90 degree steering lock. Fuller noted the limitations in the designs handling at high speed and high wind with it's rear-wheel steering design.

The Dymaxion Map is a projection of a world map on the surface of an icosahedron, which can be unfolded and flattened to two dimensions. The map includes interruptions in order to preserve the shapes and sizes of the continents and reduce distortions. Fuller applied for a patent in the United States in February 1944, which was issued in January 1946. The patent application showed a projection on a cuboctahedron.

In 1954, Fuller published another version of the Dymaxion Map with co-cartographer Shoji Sadao using a modified icosahedron for the base of the projection. This version depicts the Earth's continents as a single island or contiguous land mass. It is the version most commonly referred to.

Fuller's interpretation of the rowing oat sees the vessel pared back to two streamlined and lightweight hulls, called needles, which positions the oarsman in an elevated seat which can be accessed without aid.

Another prototype for low-cost portable housing, Fuller's design aimed to reduce the structural weight of the dwelling. The result comprises transparent bubble windows across a partial sphere made from fiberglass. The bulging glass windows (resembling the eyes of a fly) could be swapped for solar panels and rainwater collection systems as part of Fuller's ambition to design an autonomous dwelling machine.

Buckminster Fuller was born Richard Buckminster Fuller on July 12, 1895 in MIlton Massachusetts. Fuller was born into a family noted for production strong individualists inclined toward activism and public service. in 1913, Fuller entered Harvard University, but he was expelled after excessively socializing and missing his midterm exams. His expulsion saw him leave to work at a mill in Canada where he took an interest in the machinery and learned to modify and improve manufacturing equipment. In 1915, Fuller returned to Harvard where he was again dismissed.

During the First World War, Fuller served in the United States Navy from 1917 to 1919. In his service, he demonstrated his aptitude for engineering by inventing a winch for rescue boats that could remove downed airplanes. This invention saw Fuller's nomination to receive officer training where he further developed his ability to study problems.

In 1917, Buckminster Fuller married Anne Hewlett, daughter of James Monroe Hewlett. In 1926, Fuller's father-in-law developed a new method of producing reinforced concrete buildings. The construction company the two ran failed in 1927. This saw Fuller unemployed and suicidal, at which point he decided he decided he had no right to end his life. Instead, he concluded he had a responsibility to use his experiences and intellect in the service for others.

Other than his inventions and designs, Fuller found other outlets for his ideas. During the 1930s he published Shelter magazine, and from 1938 to 1940 he was science and technology consultant for Fortune magazine. During the 1940s, Fuller began to teach and lecture at universities, including Harvard and MIT, and in the late 1950s he became a professor at Southern Illinois University, where he and Anne Hewlett lived in a geodesic dome when in residence.

Buckminster Fuller was born in Milton.

Buckminster Fuller: The Man Who Saw The Future | Random Thursday