A BCI relies on direct measures of brain activity, provides feedback to the user, is processed in real time, and relies on intentional control. BCIs measure central nervous system (CNS) activity, converting it into artificial output in order to replace, restore, enhance, supplement, or improve natural CNS output and changing the ongoing interactions between the CNS and the external and internal environment. BCI systems have applications in neurorehabilitation, assistive device technology, cognitive enhancement and human-to-computer communication. BCIs are used for communication or control of external prosthetic devices in people living with conditions such as spinal cord injury, Amyotrophic Lateral Sclerosis (ALS), Locked-in Syndrome (LIS), and Multiple Sclerosis (MS). BCIs can be used for functional electrical stimulation of muscles in a paralyzed person or of peripheral nerves to restore bladder function. BCIs can monitor brain activity during prolonged demanding tasks and detect lapses of attention and alert the person. BCIs are used in research to study CNS function.

iBCIs use microscale probes with 96 fine tipped microelectrodes in a 4x4 mm array that is inserted into the cortex. Sensors receive all-or-none output of single neurons, known as the action potential, as well as summed voltage fluctuations from small and large numbers of neurons, called field potentials.

Motor imagery is the imagining of a movement rather than actual execution of movement. Motor imagery activates areas of the brain that are responsible for generating actual movement. Motor imagery techniques do not use external signals and are called endogenous BCIs. Steady-state visual evoked potential (SSVEP) and P300 BCIs are exogenous BCI paradigms that use external stimuli such as flickering LEDs or auditory beeps to evoke discriminative brain patterns.

Within motor imagery, sensorimotor rhythms (SMR) have been used by patients with tetraplegia, spinal cord injury, and Amyotrophic Lateral Sclerosis (ALS). In SMR imagination of kinesthetic movements of large body parts such as hands, feet and tongue can result in modulation of brain activity, such as event-related desynchronization (ERD) in mu (8-12 Hz) and beta rhythms (18-26 Hz), and relaxation results in event-related synchronization (ERS). EEG electrodes above the sensorimotor cortex record ERD and ERS modulations and can be used to control prosthetic devices and move the cursor on a computer. Training using the SMR paradigm can last up to several weeks. SMR can distinguish motor activities corresponding to large body parts, but the decoded motor information does not include magnitude or direction kinematics parameters such as position, velocity, or acceleration.

Imagined body kinematics (IBK), sometimes referred to as natural imaginary movement, is a paradigm independent from SMR because of the different training and analysis protocols. IBK originated from invasive BCI technology, but is extracted from low-frequency SMR signals. Subjects are asked to imagine the continuous movement of only one body part in multi-dimensional space and signals are decoded in the time domain. IBK requires less training time compared with SMR.

P300-based BCIs are communication tools in which thought is used to input texts or commands, control smart home controls, and for brain painting. The P300 is the one of the most studied event-related potentials (ERP). EEG signals of a specific event type are averaged to derive an ERP. In ERP P300 is a positive deflection with a time delay of about 250 ms to 750 ms after the onset of a rare and unexpected stimulus. P300 speller devices use a matrix of letters, numbers and symbols that flash in sequence and the subject is required to focus their attention on the intended character, which is determined by the speller based on its row and column. Visual P300 BCI can be used by most subjects easily with high accuracy; disadvantages include fatigue from the high level of attention and visual focus issues and inability of use for people with visual impairment.

SSVEP is also referred to as photic driving, since responses are generated in the visual cortex. SSVEP requires highly accurate eye control. In response to flickering stimuli, subjects shift their gaze and their attention. An EEG pattern is formed that is consistent with the flickering frequency of the stimulus on the central retina. Multiple flickering targets with distinct flickering frequencies are presented to the user and the intended target is determined by matching the pattern of EEG activity to the command associated with the particular frequency.

Hybrid BCI platforms combine EEG with one or more physiological measures, such as heart rate by ECG, eye movement with electrooculography (EOG), or a hemodynamic signal recorded by functional near-infrared spectroscopy (fNIRS).

Covert and overt attention

For discrete movement intention, EEG signals are collected before the onset of movement, even in subjects that are not able to physically execute an actual movement.

Auditory exogenous stimulation can be used to evoke auditory steady-state responses (ASSR). Rapid auditory stimuli has been shown to record ASSR maximum amplitude from the vertex of the scalp.

Under the somatosensory paradigm, vibrotactile sensors are placed on the body and stimulated at different frequencies, producing EEG signals. Somatosensory-based BCI systems have been used to assist patients with locked-in syndrome.

Preprocessing is needed to enhance signal-to-noise ratio and remove artifacts such as the part of EEG signals that come from muscular activity of the head and eye that are unrelated to the brain.

After brain signals are preprocessed, they are fed into one or more feature extraction algorithms that extract features in the time domain and frequency domain that encode messages or commands.

In BCIs, classification is the translation of features provided by the feature extractor to a category of brain patterns using classification algorithms.

Over the last five decades, progress in neural recording techniques has allowed the number of simultaneously recorded neurons to double approximately every seven years, mimicking Moore's law. Such exponential growth motivates us to ask how data analysis techniques are affected by progressively larger numbers of recorded neurons. 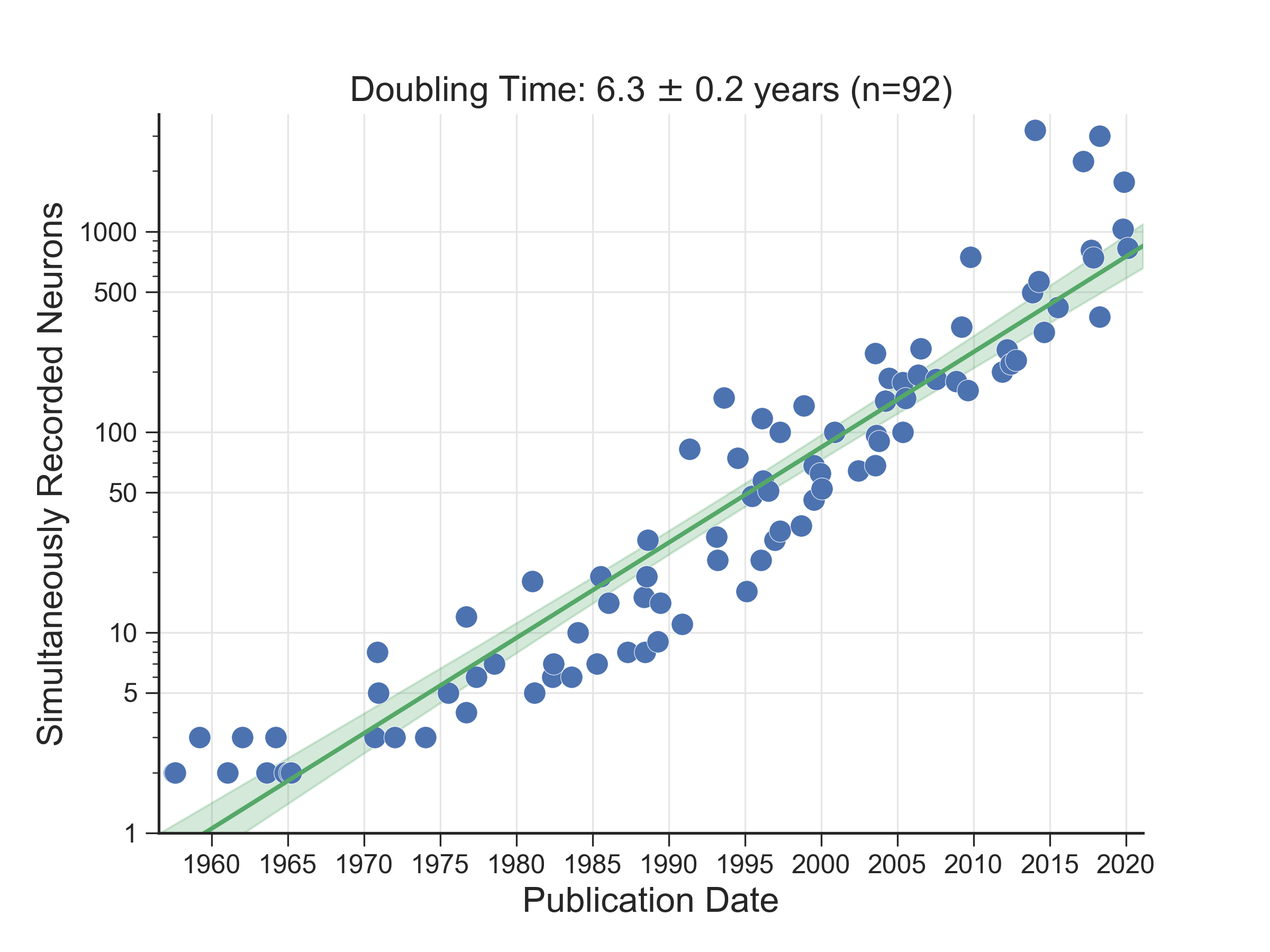 For training BCI users, virtual reality is a method of providing feedback. In gaming for the purposes of entertainment, virtual reality headsets used for gaming could include EEG sensors to potentially allow games to respond differently to the user depending on their mood or how they respond to particular elements of the game.

Optogenetics is a pre-clinical neuroscience research tool that has been suggested as an approach for neuroprosthetics and the treatment of brain disorders. Optogenetics can be used for real-time control of genetically engineered brain neurons. Photosensitive proteins open and close membrane channels via light-inducible activation or suppression.

Optogenetics previously utilized optical fibers inserted into the skull, but wireless optogenetics technologies are being developed.Optogenetic approaches could potentially use red or near infrared light, which has high tissue penetration, delivered by light emitting diodes (LED).

Startup Neurable unveils the world's first brain-controlled VR game.
A microelectrode array implanted into the primary motor cortex of a person with tetraplegia is used in a BCI system, enabling the operation of e-mail and television with a prosthetic hand and a robotic arm.
Farwell and Donchin demonstrate the use of the P300 event-related potential to allow normal volunteers to spell words on a computer screen.
Dr. Jacques J. Vidal, professor at University of California Los Angeles, poses the question of whether observable brain signals could be carriers of information in person-computer communication or for controlling devices.
Signals from single cortical neurons demonstrate control of a meter needle.

Nerualink and the Brain's Magical Future