Artion is a global NFT MarketPlace Powered On Fantom founded in 2021.

On September 24, 2021, the Fantom Foundation announced the launch of a new non-fungible token (NFT) marketplace that aims to compete with the myriad of NFT markets out there today. The market dubbed Artion is an NFT marketplace built on the Fantom network and claims to bolster “0% commissions, with the near-zero transaction costs.”

A new NFT marketplace has been announced by the Fantom Foundation following the billions of dollars worth of NFT sales stemming from veteran NFT markets that leverage the Ethereum (ETH) network like Opensea, Rarible, and Makersplace.

The non-fungible token collection Fantom Punks is one NFT project that leverages the Fantom blockchain.

In more recent times, the Ethereum network, due to excessive network fees and transaction congestion, has been losing ground to other blockchains like Avalanche (AVAX), Solana (SOL), Binance Smart Chain (BSC), Terra (LUNA), Tezos (XTZ), and more. This includes taking money from decentralized finance (defi) and non-fungible token (NFT) sales as other blockchains are now offering these services.

Fantom is another blockchain network aiming to enter the fray of defi, NFTs and smart contracts. The website fantom.foundation says the protocol is a “fast, high-throughput open-source smart contract platform for digital assets and dapps.” 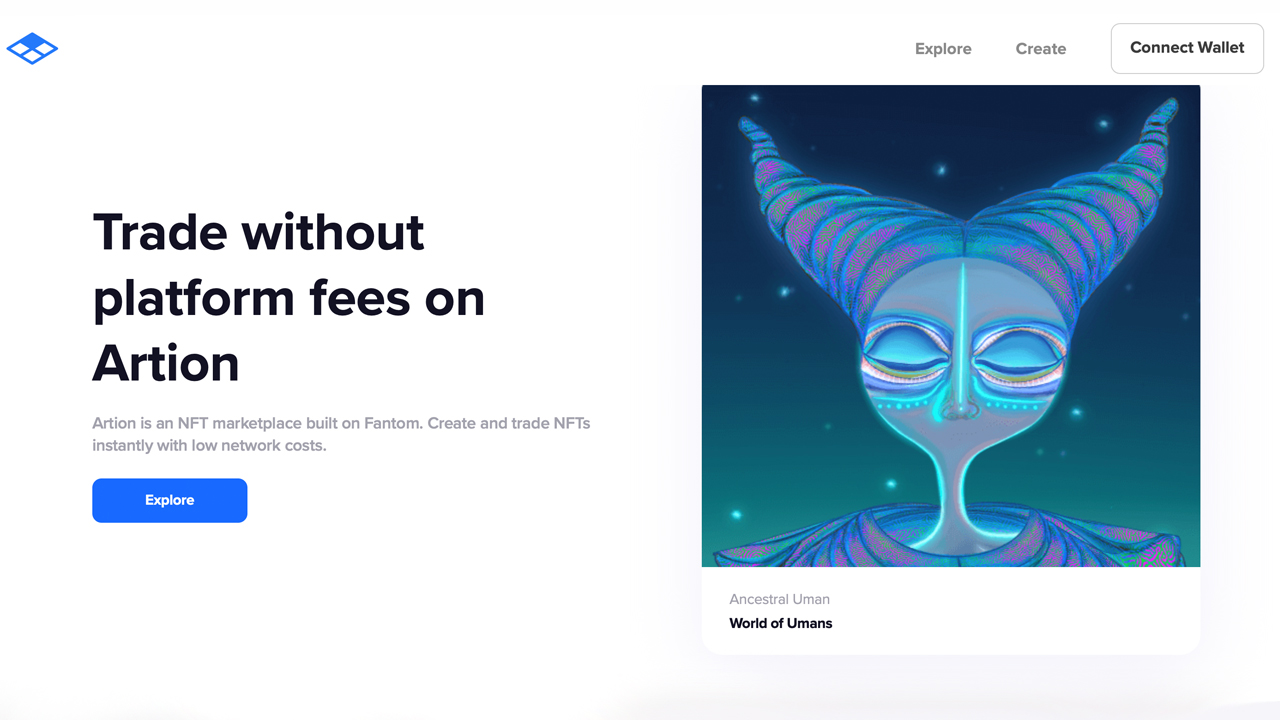 The platform has a native cryptocurrency called fantom (FTM) which has gained 151% in 30 days and increased by 3,070% year to date. On Friday, the Fantom Foundation announced the launch of an NFT marketplace that’s currently in beta called Artion. The NFT market is built on Fantom and will connect with wallets like Metamask and the Coinbase defi compatible wallet.

“Artion is feature-filled, open-source, fast, and inexpensive: 0% commissions, with the near-zero transaction costs and fast finality that you are used to,” the Fantom Foundation blog post details. “Artion supports Fantom-based ERC20 tokens, beginning with FUSDT, USDC, DAI, and WFTM. Future releases will add support for even more tokens— Additionally, creators can set royalties at the time of minting and earn revenue on secondary market sales,” the blog post explains.

Defi Coder Andre Cronje: ‘It’s Not About the Money… It’s About Sending a Message’

The creator of Yearn Finance and Keep3rV1, Andre Cronje is also behind the Artion NFT project. The prolific coder talked about the market in comparison to the leading NFT market Opensea in a recent interview. Following the interview, Cronje tweeted a GIF from the “Joker” movie starring Joaquin Phoenix which says “It’s not about the money… It’s about sending a message.”

The NFT marketplace already has a number of NFT collectibles featured on the web portal from art, sports, trading cards, NFTs with utility, virtual world NFTs, and more. Artion also features Chainlink price feeds as well and offers users the ability to mint their own non-fungible token collectibles. “The next release of Artion will add a built-in version of Anyswap’s Ethereum-Fantom NFT bridge for interoperability with Ethereum,” the Artion announcement further details.

The Fantom network already has a number of collections like Fantom Punks, Strange Brew, and Fantom Waifus. The Artion project is all open source and tech savvy individuals can review the code for the smart contracts, the server, the Artion-client, and the marketplace tracker. “Our mission, in short, is to unburden creators of the high-fees and constraints that limit the potential of imagination,” the Fantom Foundation concludes.

Since Artion runs on the Fantom Opera Network, transactions are usually confirmed within 1-2 seconds.

Transactions are usually just a fews cents, allowing users to create and trade many NFTs without prohibitively high network fees.

Trade NFTs via auction or direct offer without any fees taken by Artion.

Fantom tutorial: How to setup Metamask, do cross-chain swaps & use SushiSwap on Fantom