City. The capital of the Arkhangelsk region. Regional center of the Russian Federation.

Arkhangelsk.
The capital of the Arkhangelsk Region of the Russian Federation. 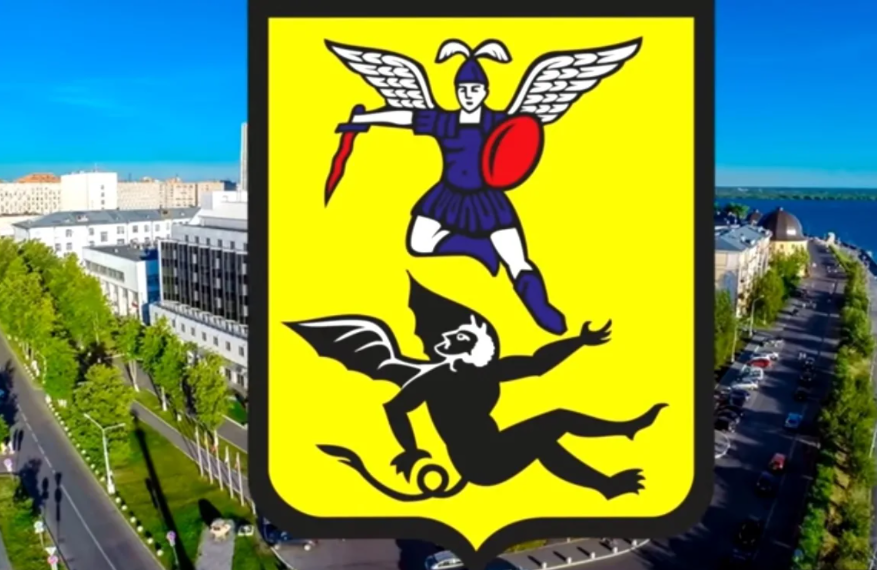 Coat of arms of Arkhangelsk

Arkhangelsk was founded on the initiative of Ivan the Terrible in 1584.

The city is spread on both sides of the Northern Dvina River, as well as on the islands of its delta.

Arkhangelsk is the largest seaport in the north of Russia.

The city has a moderately cold temperature. The climate in Arkhangelsk is similar to the climate of central Russia, however, it is about 5-7 degrees colder. In winter, there are frosts up to -35, in summer it can be hot up to +33.

The "beginning" of the city was laid by the foundation of the Archangel Michael Monastery.

At the beginning of the 12th century, the Novgorodians (namely, Archbishop St. John) founded the Archangel Michael Monastery. Around it, a small settlement and a ship pier were founded for the extraction of animals, fish and business. Over the 400 years of its existence, the monastery was attacked twice: the first time in 1419 - it was destroyed by the Swedish Murman barbarians, and the second time in 1637 - it was attacked by fire and burned down, later it was moved to another place (to where Uritsky Street is now ).

The reason for the construction of the city can also be considered the fact that Russia, as part of the Livonian War (1558-1583), lost all access to the sea.

On March 4, 1583, Ivan the Terrible signed a decree: "To erect a wooden fortress on Cape Pur-Navolok on the right bank of the Northern Dvina", thereby he decided to further strengthen the territory, protecting it from Sweden. And a year later, in 1584, the tsar's guardsmen - Nashchokin and Volokhov fulfilled the decree and built a fortress, which they dubbed the New City. Then the name of the fortress was changed: New Kholmogory City, Novokholmogory.

In the 16th century, Russia established trade relations with Western countries and Arkhangelsk, being a port city and a center of trade, brought 55% of the income from foreign trade to the treasury. During this time the city was rebuilt and "expanded" along the Northern Dvina.

1667 was a terrible year for Arkhangelsk. The city had to be rebuilt due to a severe fire (do you remember that the city was made of wood?), in which the Mikhailo-Arkhangelsk Monastery, the Order Chambers, the Voivode’s House, the Commandant’s House, the houses of citizens, estates and churches suffered. In 1668-1684, it was built the first stone building in Arkhangelsk 480 meters long and called "Gostinye Dvory". The courtyards included 3 interconnected courtyards and 6 stone towers.

In 1668-1684, the first stone building in Arkhangelsk, 480 meters long, was built and called "Gostinye Dvory". The courtyards included 3 interconnected courtyards and 6 stone towers.

In 1693, Peter the Great founded the Admiralty and the Solombala shipyard, and in 1694 the first ship built in this shipyard was launched. On the solemn descent was Peter the Great himself.

"Solombala" - where did the name come from?

The legend says that on the day when the ship was launched, Peter ordered a holiday ("bal" in Russian), but since the softened soil did not provide the rigidity necessary for dancing, the future emperor ordered that the earth be covered with straw ("soloma" in Russian). -Russian). Hence the name "Solombala", which comes from "holiday on straw".

In 1700 - 1713, the Solombala shipyard was 100% involved, since at that time Sweden was fighting for the possession of the Baltic territories, and the White Sea was the only safe road to the West. Arkhangelsk provided access to the White Sea and the possibility of trade with Western Europe.

May 16, 1703 Peter the First founded the port of St. Petersburg. And in 1713, Peter the Great issued a decree that made St. Petersburg the main port of the Russian Empire. Accordingly, Arkhangelsk ceased to play the role of the main northern port.

According to the decree of Peter the Great, since 1713, such a quantity of products was brought to Arkhangelsk so that there was enough, but without a surplus.

By the way, in 1708 the Arkhangelsk province was founded, while Arkhangelsk became the center headed by the governor Golitsyn.

Ekaterina II, who came to power from 1762 to 1796, canceled the prohibitions of Peter, and Arkhangelsk again became an important link in trade with the West, along with St. Petersburg.

1806 was a year of growth for Arkhangelsk, because, due to the war with Napoleon, Great Britain had only one trade "road" - the White Sea, and Arkhangelsk remained "connected".

On October 4, 1916, the port of Murmansk was opened on the Kola Bay - a port that opened Russia's access to the Arctic Ocean through the ice-free Kola Bay. Arkhangelsk has lost its uniqueness as the main northern port of Russia.

But this did not prevent the city from becoming the largest logging center in the country, the base for the development of the Arctic and the base for establishing navigation along the Northern Sea Route.

Arkhangelsk during the Civil War 1917.

During the Civil War of 1917, the White Guard troops were stationed in the city, in addition, foreign invaders arrived in the city.

Supplies, weapons arrived in the city, it was assumed that enough forces would be gathered in the city so that foreign troops could hold out in the north of Russia.

However, already in 1920, the Red Army troops liberated the city. The white units faced opposition from the local population, which for the most part supported the Red Army.

On July 15, 1929, Arkhangelsk became the administrative center of the Northern Territory, which included the Arkhangelsk, Vologda, Severodvinsk provinces, the Komi Autonomous Region and the Nenets National District. Starts of expeditions to the Arctic took off from the city. In addition, other expeditions, which went to different regions of the north, also started from here.

Arkhangelsk during the Great Patriotic War (The Second World War).

During the war years of 1941-1945, the city of Arkhangelsk received goods that were delivered under Lend-Lease from the allies. And although many goods arrived in the city, they all went to the front, the population of the city suffered from the difficult situation associated with the war.

After the war, the city lived calmly and measuredly, the schemes of territorial divisions changed, new buildings were built. Already in the 21st century, the city received the title of city of military glory.

Arhangelsk was founded by Ivan the Terrible.
Date of foundation of the city of Arkhangelsk.

Arkhangelsk was founded on the initiative of Ivan the Terrible in 1584.