The Kindle is a family of book e-readers developed and sold by Amazon.

The Kindle is a series of book e-readers developed and sold by Amazon. The Kindle was first introduced in 2007, and while it was not the first e-reader on the market, it was quickly popular because it offered direct access to Amazon's massive collection of digitized books, magazines, and newspapers. In addition to its e-readers for adults and kids, Amazon provides a platform for authors to self-publish for Kindle.

The Amazon Kindle is thin and light, designed for one-handed reading. The screen is designed to look like real paper by using actual ink particles and proprietary fonts that emulate crisp text similar to a physical book. The blacks and whites used on the screen are chosen to optimize text and image quality, and the device is designed to prevent eye strain. The kindle does not use blue light and does not produce a glare, even in bright sunlight, and the battery can last for weeks.

The base version of the Kindle retails for $99.99 in the United States and has a 6-inch screen, 16GB of storage, 300 PPI resolution, 4 LEDs front light, and WiFi.

The Paperwhite version of the Kindle retails for $94.99 in the United States and has a 6.8-inch screen, 8GB of storage, 300 PPI resolution, 17 LEDs front light, WiFi, and is waterproof.

The Paperwhite Signature Edition version of the Kindle retails for $129.99 in the United States and has a 6.8-inch screen, 32GB of storage, 300 PPI resolution, 17 LEDs front light, WiFi, wireless charging, and is waterproof.

The Scribe version of the Kindle retails for $339.99 in the United States and has a 10.2-inch screen, 16GB, 32GB, or 64GB of storage, 300 PPI resolution, 35 LEDs front light, and WiFi. This version is not waterproof but offers writing capability and a pen to use with the device.

The Oasis version of the Kindle retails for $164.99 in the United States and has a 7-inch screen, 8GB or 32GB of storage, 300 PPI resolution, 25 LEDs front light, WiFi, and is waterproof. This version also offers free cellular connectivity.

The Kids version of the Kindle retails for $119.99 in the United States and has a 7-inch screen, 16GB of storage, 300 PPI resolution, 4 LEDs front light, and WiFi. The kids version also has parental controls, a one-year Amazon Kids+ subscription, and a two-year warranty. 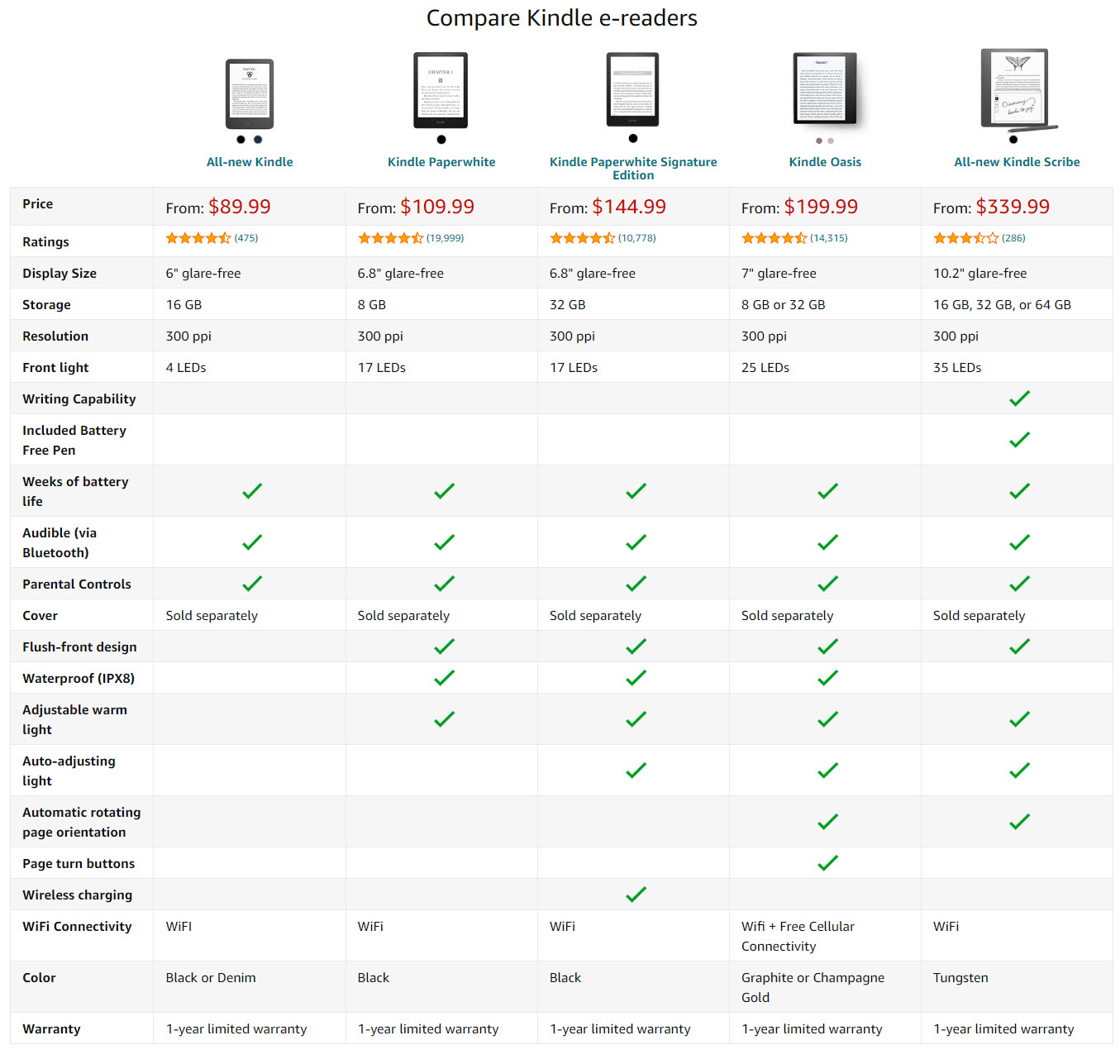 Amazon Kindle offers the Direct Publishing service that allows anyone to self-publish their books for free on the Kindle platform. Authors keep the rights to their book, set the price themselves, can offer paperback versions of their books, can make changes to their book at anytime online, and earn royalties on all sales.

There are several e-readers on the market in competition with the Kindle. Barnes & Noble offers the Nook GlowLight family of e-readers, and Rakuten offers the Kobo e-readers. The Onyx Boox family of products includes both small and large format e-readers as well as color displays and full-size reading E Ink monitors. Apple competes in this category as well, with the Books app on its iPad.

The Kindle was developed by Amazon's Lab126 and named by the branding agency Cronan, run by San Francisco Bay Area graphic designer Michael Cronan and his wife Karin Hibma. "Jeff [Bezos, the CEO] wanted to talk about the future of reading, but in a small, not braggadocio way. We didn't want it to be 'techie' or trite, and we wanted it to be memorable, and meaningful in many ways of expression, from 'I love curling up with my Kindle to read a new book' to 'When I'm stuck in the airport or online, I can Kindle my newspaper, favorite blogs or half a dozen books I'm reading," stated Himba about the naming. Kindle means to set alight or start to burn, to arouse or be aroused, to make or become bright. The word's roots are from the Old Norse word kyndill, meaning candle. "I verified that it had deep roots in literature," adds Hibma. "From Voltaire: 'The instruction we find in books is like fire. We fetch it from our neighbors, kindle it at home, communicate it to others and it becomes the property of all.'" 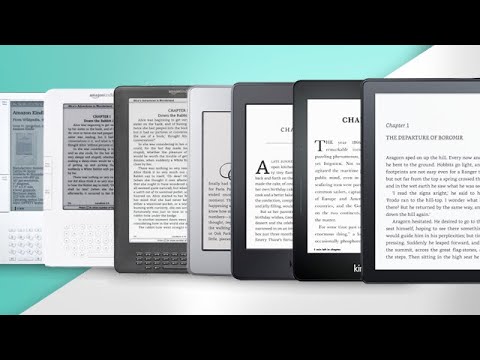 The Amazon Kindle was launched on November 19, 2007, selling out within hours that day. At the time, it was dubbed "the iPod of reading." The original Kindle launched with a 6-inch E Ink display and offered wireless connectivity via Amazon's Whispetnet, which was based on the EVDO broadband service offered by cell phone carriers, allowing it to work anywhere, not just WiFi hotspots. The Kindle did not have touch control capability at that time, so it came with a full keyboard. It also offered a speaker and headphone socket, and expandable SD card storage.

On February 9, 2009, Amazon released the Kindle 2 with a more conventional, flatter design, faster page turns and refresh, and sixteen shades of gray. The Kindle 2 also had more storage for books, and the Kindle store had expanded to around 230,000 titles and had a Stephen King exclusive called Ur. A new navigation controller was added, making it easier to select text and options on the screen. The original cost was $359, but it was later discounted to $299 and then eventually $259. By October, the Kindle 2 was replaced by the Kindle 2 International edition, which used GSM for global wireless connections.

The Kindle family expanded to include a line of larger devices called the Kindle DX, designed for magazine reading. However, this line of Kindle only survived two generations and was eventually discontinued.

In 2011, Amazon introduced the Kindle Touch in the United States and internationally in 2012. The Touch was the first time the Kindle had a touchscreen, eliminating the navigation keys and the keyboard. The new version also had 4GB of storage, a battery life of weeks, WiFi or 3G, and the new Amazon's X-Ray feature. The Kindle Touch originally cost $99 for WiFi and $149 for 3G.

In September 2012, Amazon announced the front-lit Kindle Paperwhite. This Kindle introduced its illumination display, allowing users to read in the dark and manually adjust the screen brightness. The Kindle Paperwhite 2 was released one year later and offered an improved E Ink display, faster page turns due to a more powerful processor, and greater illumination. The third edition Kindle Paperwhite was released in June 2015 with a 300 ppi E Ink display, twice the number of pixels of the original Paperwhite, and Amazon's new reading font, Bookerly. In 2018, the Paperwhite was improved to include bluetooth for headphones for audio books, waterproofing, and improved battery life.

In September 2014, Amazon released it Kindle Voyage. The Kindle Voyage removed the bezel and placed touch controllers next to the display to make page turning easier without having to swipe the display. It also offered adaptive front lighting, a feature unique to this model, and this version of the Kindle was more expensive at $199 for the WiFi model and $289 for the 3G version.

The Amazon Kindle Oasis was first released in April 2016, designed to be a one-handed reading device. It was a thinner, lighter device with the hardware built into the grip on one side and two top page turning buttons. It had front lighting, but not the adaptive lighting of the Voyage, and came with a battery cover that could make the battery last up to nine weeks, making it the longest-lasting Kindle to date. In 2017, Amazon released a bigger version of the Oasis with a 7-inch screen with adaptive front lighting and also made this version waterproof. In 2019, Amazon increased the Oasis screen size to 7 inches and improved its brightness and battery life.

In 2019, Amazon introduced the Kindle Kids edition with 7-inch screen and a year's subscription to Fire for Kids Unlimited with age-appropriate content. Oddly, the Kids Edition did not originally have waterproofing, but it did come with a two-year warranty.

How the Kindle Got Its Name

Title
Author
Date
Publisher
Description
Old Amazon Kindle devices will soon lose 3G access
Darrell Etherington
July 29, 2021
TechCrunch
If you have an older Amazon Kindle with 3G internet, take note that you may not be able to wirelessly access and download new content anymore starting in December.
The best e-reader for 2021
David Carnoy
May 5, 2021
CNET
Why read on your phone or tablet when there are great E Ink e-readers out there? Here are our current top picks.
Amazon adds blindingly obvious Kindle feature to make book covers your lockscreen
Thomas Ricker
April 16, 2021
The Verge
Amazon's new Display Cover feature allows Kindle e-readers to show the cover art of the book you're reading right on the lock screen. It works with most books, magazines, comics, and Manga.
I've tested Amazon's entry-level Kindle for a year, and it's the best e-reader for less than $100
Malarie Gokey
March 2, 2021
Business Insider
The entry-level Amazon Kindle is a great e-reader for less than $100. I've tested it for about a year now. Here's my full review.
The best Amazon Kindle cases - Business Insider
Don Reisinger and Sarah Lord
February 1, 2021
Business Insider
Protect your Amazon Kindle from accidental drops and spills. These are the best cases for Amazon Kindle devices.
SHOW MORE