Uma Valeti is a cardiologist and the CEO and cofounder of Upside Foods.

Dr. Uma Valeti is a cardiologist and the CEO and cofounder of clean meat company Upside Foods (formerly known as Memphis Meats). He is also an adjunct professor at the Stanford University School of Medicine and serves on the advisory council of the Good Food Institute. 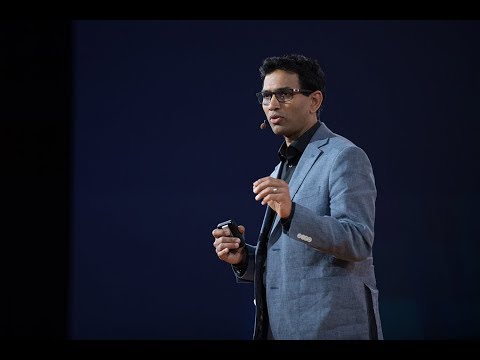 Uma Valeti cofounded Upside Foods, originally named Memphis Meats, in 2015 in San Francisco with Nicholas Genovese and Will Clem. The company produces meat directly from animal cells without the need to raise and slaughter animals.

Valeti became concerned about food-borne illnesses from eating meat and contamination issues in slaughterhouses. Additionally, as a cardiologist, he wanted to improve people's health. "I got into cardiology because I wanted to positively impact human health. I see my role at Memphis Meats as an extension of that mission – I get to play a larger role in improving our food system from a public health perspective," stated Uma Velati. In 2005, during his practice in interventional cardiology at Mayo Clinic, they had a study on repairing muscle tissue of the heart with stem cells. He realized then that stem cells can be used to grow animal muscle tissue or meat as well.

Valeti grew up in Vijayawada, India. His father was a veterinarian and his mother was a physics teacher. He went to Jawaharlal Institute of Postgraduate Medical Education and Research. He had his residency for internal medicine at the Wayne State University School of Medicine and State University of New York College at Buffalo. Dr. Valeti earned a fellowship in cardiovascular disease and interventional cardiology at the Mayo School of Health Sciences.

Why This Cardiologist Is Betting That His Lab-Grown Meat Startup Can Solve the Global Food Crisis.

Title
Author
Date
Publisher
Description
Ready For Meat Grown From Animal Cells? A Startup Plans A Pilot Facility
Allison Aubrey
January 22, 2020
NPR.org
Memphis Meats, a startup company that has just raised $161 million, says it has a "clear path" to bringing cell-based meats to market. Yet the company and its competitors face challenges.
WIRED25: Stories of People Who Are Racing to Save Us
WIRED Staff
October 15, 2019
Wired
Humanity is facing thorny problems on all fronts. These folks are working to solve them--and trying to avoid the unintended consequences this time.