The Department of Homeland Security's mission is to protect the American people from threats.

The Department of Homeland Security (DHS) is responsible for the security of the United States. The department employs over 240,000 people in jobs that range from aviation and border security to emergency response. The DHS was formed in the aftermath of the September 11 attacks and since then it has been focusing on building infrastructure to confront emerging threats against the United States by improving security standards worldwide, addressing systemic risks, and constructing redundancies for critical lifelines. The DHS is also creating partnerships to develop and improve public, private, and international cooperation and crowd-sourcing solutions.

The operations of the DHS comprise counter terrorism and homeland security, securing U.S. borders, cyberspace, and critical infrastructure, preserving economic security, and providing emergency services to disaster zones. The following list elaborates on the activities of the DHS:

The Department of Homeland Security was established in 2002, combining twent-two different federal departments and agencies into a unified, integrated Cabinet agency. Eleven days after the September 11, 2001 terrorist attacks, Pennsylvania Governor Tom Ridge was appointed as the first Director of the Office of Homeland Security in the White House. The office supervised and coordinated a strategy to ward off the terrorist threat and to prevent any future attacks. With the passage of the Homeland Security Act by Congress in November 2002, the DHS was officially instated as a department at the Cabinet level to further coordinate national homeland security efforts, and opened on March 1, 2003. 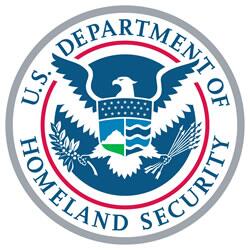 The DHS seal was created in 2003 to symbolize the Department's mission of preventing attacks and protecting Americans on land, sea, and air. In the center of the seal, a graphically styled white American eagle with a crest in place of its body appears in a circular blue field. The eagle's wings cross an inner red ring into an outer white ring the contains the words "U.S. Department of" in the top half and "Homeland Security" in the bottom half in a semi-circular placement and capitalized, as can be seen on the image on the right.

The FY 2022 President’s Budget provided the DHS with $52.2 billion in net discretionary funding. An additional $18.8 billion for the Disaster Relief Fund (DRF) had been granted for response to and recovery from major disasters and emergencies. The total proposed budget for fiscal year 2022 for the DHS amounted to $90.8 billion. The table below shows a detailed breakdown of the budget for the fiscal years running from 2020 to 2022, in billions rounded to the nearest thousand.