Muriel Teresa Wright was an American actress. She was nominated twice for the Academy Award for Best Supporting Actress: in 1941 for her debut work in The Little Foxes, and in 1942 for Mrs. Miniver, winning for the latter. That same year, she received a nomination for the Academy Award for Best Actress for her performance in The Pride of the Yankees, opposite Gary Cooper. She is also known for her performances in Alfred Hitchcock's Shadow of a Doubt (1943) and William Wyler's The Best Years of Our Lives (1946).

Wright received three Emmy Award nominations for her performances in the Playhouse 90 original television version of The Miracle Worker (1957), in the Breck Sunday Showcase feature The Margaret Bourke-White Story, and in the CBS drama series Dolphin Cove (1989). She earned the acclaim of top film directors, including William Wyler, who called her the most promising actress he had directed, and Alfred Hitchcock, who admired her thorough preparation and quiet professionalism.

Muriel Teresa Wright was born on October 27, 1918, in Harlem, New York City, the daughter of Martha Espy and Arthur Hendricksen Wright, an insurance agent. Her parents divorced when she was quite young and she lived with various relatives in New York and New Jersey. An uncle of hers was a stage actor. She attended the exclusive Rosehaven School in Tenafly, New Jersey. The acting bug revealed itself when she saw the legendary Helen Hayes perform in a production of "Victoria Regina." After performing in school plays and graduating from Columbia High School in Maplewood, New Jersey, she made the decision to pursue acting professionally. 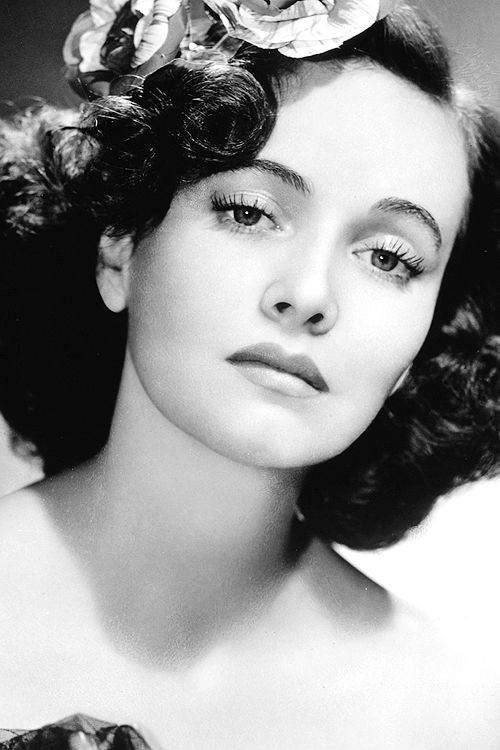 In 1938, she moved to New York, adopting the name Teresa Wright as there was already a Muriel Wright registered with Equity. In the autumn of 1938 she was given work on Broadway playing a small role and understudying Dorothy McGuire (who had succeeded Martha Scott) in the role of Emily in Thornton Wilder's Our Town. She did not get a chance to play Emily in New York, but played the part on tour in New England in the spring of 1939.

In autumn 1939, Wright began a two-year appearance in the stage play Life with Father, playing the role of Mary Skinner. It was there that she was discovered by Samuel Goldwyn, who came to see her in the show she had been appearing in for almost a year. Goldwyn would later recall his first encounter with her backstage:

Miss Wright was seated at her dressing table, and looked for all the world like a little girl experimenting with her mother's cosmetics. I had discovered in her from the first sight, you might say, an unaffected genuineness and appeal.

Goldwyn immediately hired the young actress for the role of Bette Davis' daughter in the 1941 adaptation of Lillian Hellman's The Little Foxes, signing her to a five-year Hollywood contract with the Goldwyn Studios. Asserting her seriousness as an actress, Wright insisted her contract contain unique clauses by Hollywood standards:

The aforementioned Teresa Wright shall not be required to pose for photographs in a bathing suit unless she is in the water. Neither may she be photographed running on the beach with her hair flying in the wind. Nor may she pose in any of the following situations: In shorts, playing with a cocker spaniel; digging in a garden; whipping up a meal; attired in firecrackers and holding skyrockets for the Fourth of July; looking insinuatingly at a turkey for Thanksgiving; wearing a bunny cap with long ears for Easter; twinkling on prop snow in a skiing outfit while a fan blows her scarf; assuming an athletic stance while pretending to hit something with a bow and arrow.

In 1941, Wright was nominated for the Academy Award for Best Supporting Actress for her film début in The Little Foxes. The following year, she was nominated again, this time for Best Actress for The Pride of the Yankees, in which she played opposite Gary Cooper as the wife of Lou Gehrig. The same year, she won the Academy Award for Best Supporting Actress as the daughter-in-law of Greer Garson's character in Mrs. Miniver. Wright is the first out of only nine actors who have been nominated in both categories in the same year. Her three Academy Award nominations and one Academy Award in her first three films is unique. She remains the only performer to have received Academy Award nominations for her first three films.

In 1943, Wright appeared in the acclaimed Universal film Shadow of a Doubt, directed by Alfred Hitchcock, playing a young woman who discovers her beloved uncle (played by Joseph Cotten) is a serial murderer. Hitchcock thought Wright was one of the more intelligent actors he had worked with, and through his direction brought out her vivacity, warmth, and youthful idealism—characteristics uncommon in Hitchcock's heroines. In 1946, Wright delivered another notable performance in William Wyler's The Best Years of Our Lives, an award-winning film about the adjustments of servicemen returning home after World War II. Critic James Agee praised her performance in The Nation:

This new performance of hers, entirely lacking in big scenes, tricks, or obstreperousness—one can hardly think of it as acting—seems to me one of the wisest and most beautiful pieces of work I have seen in years. If the picture had none of the hundreds of other things it has to recommend it, I could watch it a dozen times over for that personality and its mastery alone.

She starred opposite Robert Mitchum in the moody, Freudian western Pursued (1947), written by her husband. She returned to star with Niven, Farley Granger and Evelyn Keyes in Enchantment (1948), a story of two generations of lovers in parallel romances. Newsweek commented, "Miss Wright, one of the screen's finest, glows as the Cinderella who captivated three men", and The New York Times said, "Teresa Wright plays with that breathless, bright-eyed rapture which she so remarkably commands", but the wistful, predominantly sad story did not find favour with audiences.

In the 1950s, Wright appeared in several unsuccessful films, including The Capture (1950), Something to Live For (1952), California Conquest (1952), The Steel Trap (1952), Count the Hours (1953), The Actress (1953), and Track of the Cat (1954), opposite Robert Mitchum again. Despite the poor box-office showing of these films, Wright was usually praised for her performances. Toward the end of the decade, Wright began to work more frequently in television and theatre. She received Emmy Award nominations for her performances in the Playhouse 90 original television version of The Miracle Worker (1957) and in the Breck Sunday Showcase feature The Margaret Bourke-White Story (1960). In 1955 she played Doris Walker in The 20th Century-Fox Hour remake of the 1947 movie Miracle on 34th Street, opposite MacDonald Carey and Thomas Mitchell. 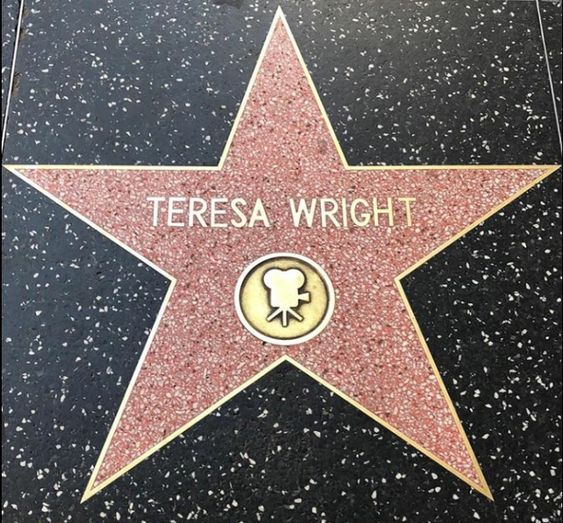 On February 8, 1960, Wright was inducted to the Hollywood Walk of Fame with two stars: one for motion pictures at 1658 Vine Street and one for television at 6405 Hollywood Boulevard. 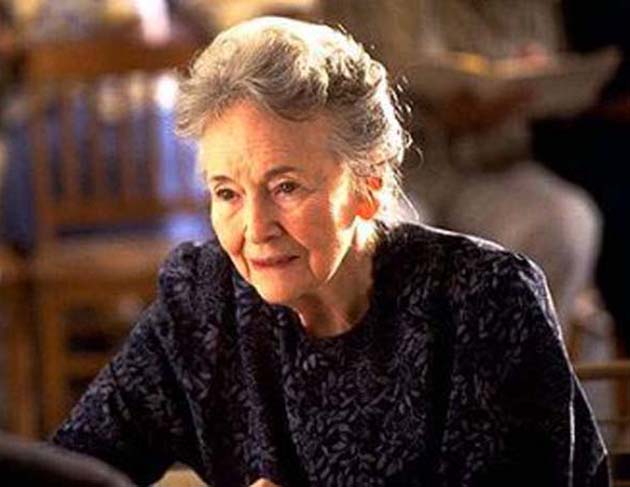 Teresa Wright in The Rainmaker (1997)

A mature actress now in her 50s, challenging stage work came in the form of "The Effect of Gamma Rays on Man-in-the Moon Marigolds", "Long Day's Journey Into Night", "Morning's at Seven" and "Ah, Wilderness!" Teresa also graced the stage alongside George C. Scott's Willy Loman (as wife Linda) in an acclaimed presentation of "Death of a Salesman" in 1975, and appeared opposite Scott again in her very last play, "On Borrowed Time" (1991). After almost a decade away from films, she came back to play the touching role of an elderly landlady opposite Matt Damon in her last picture, John Grisham's The Rainmaker (1997).

Teresa Wright died on March 6, 2005, of a heart attack at Yale-New Haven Hospital in Connecticut at the age of 86. She is buried in Evergreen Cemetery in New Haven.