The Little Foxes is a 1941 American drama film directed by William Wyler. The screenplay by Lillian Hellman is based on her 1939 play The Little Foxes. Hellman's ex-husband Arthur Kober, Dorothy Parker and her husband Alan Campbell contributed additional scenes and dialogue.

In 1900, in the cotton country of the deep South, beautiful and brilliant Regina Hubbard Giddens (Bette Davis) struggles for wealth and freedom within the confines of an early 20th-century society where fathers only considered sons as legal heirs. As a result, thanks to their ruthless tradesman father, her avaricious brothers, Benjamin (Charles Dingle) and Oscar (Carl Benton Reid), are independently wealthy, while she is financially dependent upon her sickly husband, Horace (Herbert Marshall), whose severe heart condition has confined him to a sanitarium in Baltimore for several years. 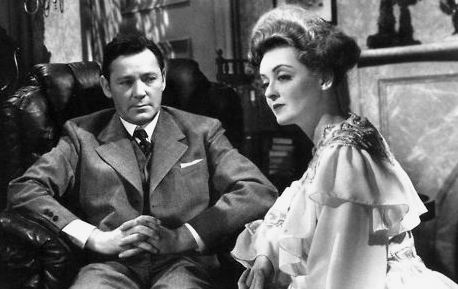 Bette Davis and Herbert Marshall in The Little Foxes

When the film begins, the Hubbards are expecting a dinner guest, William Marshall, a prominent businessman from Chicago. Ben and Oscar persuade him to build a cotton mill in their town, making them multimillionaires. Marshall invites Regina to visit him in Chicago. After he leaves, she reveals that she plans to move there, taking her daughter, Alexandra (Teresa Wright), with her.

Regina proceeds to drive a hard bargain with her brothers for a larger percentage of the mill in exchange for persuading Horace to help finance it, to the tune of $75,000. She sends Alexandra to Baltimore to bring her father home, supposedly because Regina misses him. Regina and Horace's reunion does not go well: She cannot wait to ask him for the money. He has an attack, and still she presses, destroying any illusion that she really wanted him home. Horace tells the three siblings he wants no part of it.

Oscar, having married and abused the sweet-souled, fragile, now-alcoholic Birdie (Patricia Collinge) to acquire her family's plantation and its cotton fields, now schemes to consolidate the family wealth by a marriage between his son, Leo (Dan Duryea), and Alexandra, but neither Horace nor Regina like the idea.

While the two of them argue upstairs, the brothers find an alternative. Leo, a teller at the bank, will “borrow” Horace's railroad bonds from his safe deposit box. They will use them as security for the construction, returning them long before it is time to clip the coupons. Gloating, Ben tells a furious, bewildered Regina they don't need her. Horace overhears. He is glad not to be a part of wrecking the town. Regina's anger is icy cold: “I hope you die soon,” she says. Distraught, Alexandra tells her father not to listen.

After an impromptu trip to the bank, Horace discovers that the bonds are missing. When he tells Regina what happened, she is delighted at having a scandal to hold over her brothers' heads, until Horace tells her he will say he lent the bonds to Leo, on her behalf. He is changing his will, leaving the bonds to Regina and everything else to Alexandra. She recalls the truth of the early days of their marriage, and the bitter, ugly words bring on a heart attack. He spills his medicine, and Regina sits, motionless, as he staggers to the stairs and collapses halfway up. Now Regina rushes to him, calling for the servants to take him to his room and go for the doctor. Horace dies leaving no one to contradict Regina if she accuses her brothers of theft. She forces them to give her 75% ownership of the business. A bewildered Alexandra overhears this. “What was Poppa doing on the staircase?” Ben accepts the deal philosophically. As they leave, he agrees with Alexandra, “What was Horace doing on the stairs?”

Regina is going to Chicago. Refusing to accompany her, Alexandra recalls Addie saying that there are people who eat the earth and people who stand by and watch. She won't watch. Frustrated, Regina tells her daughter that she can not control her. She hopes that Alexandra will stay, but in any case she is going to have the life for which she has yearned all her life. Regina pauses on the stairs, staring at Horace's room, and asks Alexandra if she would like to sleep in her room. “Why, mama, are you afraid?“

Alexandra's relationship with her childhood friend, journalist David Hewitt (Richard Carlson), her coming of age under his influence and their growing love arcs throughout the film. Now, she walks away with him, into the rainy night.

The Little Foxes on Rotten Tomatoes