White was born in San Diego, California, to parents Cathy and Roger. When he was young his mother was a waitress and his father, who grew up surfing, worked for the San Clemente, California, water department. He is the youngest of four children. His ancestry includes Irish and Italian. He was born with a Tetralogy of Fallot, a congenital heart defect for which he required two open-heart operations before the age of one. White spent his early years riding the San Bernardino Mountains of Southern California with his family. They would stay in a van in resort parking lots.

At an early age White's skills drew admirers. Professional skateboarder Tony Hawk befriended the nine-year-old White at the Encinitas, California, YMCA skate park and mentored him, helping White turn pro in skateboarding at the age of 16. White has said that "Tony was my hero and I was too terrified to talk to him so every time I saw him at the skate park I would try to impress him with my skateboarding in the hopes that one day he would say something to me." White has won many titles on his skateboard, including the overall title of Action Sports Tour Champion, and was the first person to compete in and win both the Summer and Winter X Games in two different sports.

Following in his older brother Jesse White's footsteps, White switched from skiing to snowboarding at age six, and by age seven, he received his first sponsorship. White has participated in five Winter Olympics in his career. At the 2006, 2010, and 2018 Winter Olympics, White won gold in the snowboard halfpipe event. White has also participated in the Winter X Games, where he has won a medal every year since 2002. Including all winter X Games competitions through 2013, his medal count stands at 18 (13 gold, 3 silver, 2 bronze), among which is the first quadruple win streak by a male athlete in one discipline, the snowboard slopestyle. White's streak was snapped in 2007 when he lost to Andreas Wiig and Teddy Flandreau, with White taking the bronze. He won the Air & Style Contest in 2003 and 2004.

At the 2006 Winter Olympics, White won gold in the half-pipe. After his first run in qualifications, White was almost out of competition, scoring only 37.7. On his second run, he recorded a score of 45.3. In the finals, White recorded a score of 46.8 (50 is the highest possible score) to win. Fellow American Danny Kass won the silver with a points total of 44.0.

Executing a near-flawless second run, White captured his third consecutive title at the 2008 U.S. Open Snowboarding Championships to go along with his third US Open slopestyle competition. This followed White's win at the 25th (2007) Burton US Open, where he placed third in slopestlyle and first in the halfpipe. At the 2007 Open, White was also crowned the first "Burton Global Open Champion". His take for the event was $100,000 (Global Open Champ), $20,000 (1st Place Halfpipe), $90,000 (3rd Place Slopestyle), and a new Corvette.

Controversy followed White's win on the 2009 SuperPipe at Winter X Games XIII[] Kevin Pearce had five hits in the pipe, and all were the same tricks White did in his final run. White, on the other hand, had six hits and he started off his run with a big backside rodeo 540 where Pearce started his run off with a big grab. Although Pearce went bigger, he had fewer hits, and his first hit wasn't as technically difficult as White's first hit. Judges came to the conclusion that White deserved the better score because he started off with a more technical trick and he had one more hit than Pearce.citation needed With the win, White became the second competitor, after Tanner Hall, to win a gold medal in the SuperPipe in consecutive years at the Winter X Games. He also won a gold medal in Slopestyle, finally winning gold after two consecutive years of bronze. 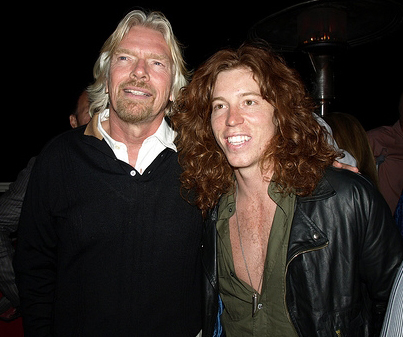 White with Richard Branson in 2009

On February 14, 2009, White won the FIS World Cup Men's Halfpipe event at Vancouver's Cypress Mountain. Out of the gate in his first qualifying run, he qualified immediately with the day's best score of 45.5. With a thumb sprained on an over-rotated backside 1080 in the second qualifying run, White clinched the event with the first of his two runs in the finals. His first finals run was awarded the highest score ever in FIS halfpipe, a 47.3.

At the 2010 Winter Olympics in Vancouver, White again won gold in the halfpipe. In the finals, White recorded a score of 46.8 on his first run, which proved a high enough score to secure the gold medal without a second run. He performed his second run anyway, as a victory lap, ending his run with a well-anticipated Double McTwist 1260 which he named The Tomahawk. This second run resulted in a record score of 48.4 (50 is the highest possible score) enlarging his margin of victory. His nearest competitor won the silver with a points total of 45.0 – 3.4 behind White.

After a sub-par performance in the Slopestyle and failing to reach the finals, White "redeemed" himself in the SuperPipe. With an 89, he sat in second place going into his 2nd of three runs. He completed the run, landing his infamous Double McTwist 1260 and finishing with a score of 97.33 to take the lead and claim the historical 4th straight Gold in the Winter X Games, held in Aspen, Colorado. The score tied an X Games record, which was set by White one year before. His 3rd run was a simple victory run featuring mostly straight air.

At Winter X, White became the first person in the history of the Winter X Games to score a perfect 100 in the men's Snowboard SuperPipe.

In December 2013, he won the third place in the Pipe & Slope contest at the FIS Snowboard World Cup in Copper Mountain, Colorado.

White finished fourth at the 2014 Winter Olympics in the Halfpipe event.

During the winter games, he was the most talked-about Olympic athlete on Facebook.

White after medalling at the 2018 Winter Olympics 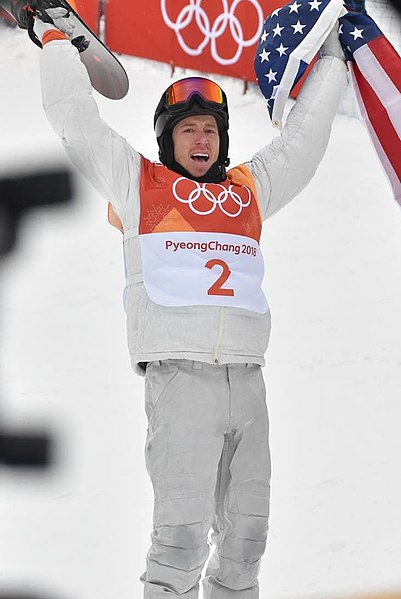 White after medalling at the 2018 Winter Olympics

While in New Zealand, training for the 2018 Winter Olympics, White crashed into the edge of a superpipe; the resulting injuries to his face required 62 stitches. Despite the accident, White qualified for the 2018 US Olympic Team. On February 14, he won his third Olympic gold medal for the Men's Halfpipe event with a score of 97.75, with Ayumu Hirano of Japan taking the silver medal and Scott James of Australia taking the bronze. White was trailing Hirano by one full point coming into his last run with a score of 94.25. Despite this, White dramatically won the gold medal with back-to-back 1440s. His gold medal was also the 100th for the United States at the Winter Olympic Games.

White finished fourth at the 2022 Winter Olympics in the halfpipe.

White has had a sponsor since he was seven years old. White signed CAA Sports for representation after working with IMG for eight years. Corporate endorsement deals include or have included Burton Snowboards, Oakley, Inc., Birdhouse Skateboards, Park City Mountain Resort, Target Corporation, Red Bull, Ubisoft, Adio, Hewlett-Packard, and American Express. He is also a brand ambassador for Krave Jerky and as part of their partnership he has developed and released his own flavors. In 2009, magazine estimated that he had earned $9 million from his endorsements in 2008.

White has made cameo appearances as himself in the 2011 film Friends with Benefits, the 2013 episode "Da Flippity Flop" of the animated TV series American Dad!, and the 2014 Disney Channel Original Movie Cloud 9.

White starred in the 2004 documentary The White Album and the 2005 snowboarding documentary First Descent.

In 2007, White appeared on the E! reality TV show The Girls Next Door as a snowboarding teacher for Holly Madison, Bridget Marquardt and Kendra Wilkinson.

A film, Don't Look Down, was released on DVD and ESPN in 2009. The film tracks his journey through the year following his Olympic success.

White appeared on the January 16, 2011, episode of Extreme Makeover: Home Edition to help redesign a room for an eight-year-old boy.

White appeared in the Nickelodeon TV Series Henry Danger in 2018 in the episode Toon in for Danger. In the episode White and Captain Man were struggling for a seat while Watching the premiere of The Adventures of Kid Danger.

White plays guitar in the electronic rock band Bad Things, which also features former Augustana bassist Jared Palomar. He got his first guitar as first prize in a snowboarding competition. The band played in one of the four Saturday headlining slots at the 2013 Lollapalooza festival, as a last-minute replacement for Death Grips. Their self-titled debut album was released in January 2014. In October 2013, White appeared in the music video for "City of Angels" by Thirty Seconds to Mars.

White had his first published interview in TransWorld SNOWboarding Magazine in 2003.

White was one of the few pro snowboarders to be a guest editor of Snowboarder Magazine (February 2008 issue).

White has a chapter giving advice in Tim Ferriss' book Tools of Titans.

In early 2016 he purchased a minority stake in Mammoth Resorts and is now a part-owner of the Mammoth Mountain, Snow Summit, June Mountain, and Bear Mountain ski areas where he got his start in snowboarding.

White has helmed the Air + Style festival of music and snowboarding since 2014, when he took ownership and moved it from Austria to Los Angeles. The 2021 festival was cancelled due to the Covid-19 pandemic.

White launched his own active lifestyle brand named 'Whitespace' in January 2022; he announced the name of the brand on his social media. The company will eventually release a line of outerwear, snowboard hard-goods, athletic equipment, and streetwear apparel.

White has had the longstanding nickname "The Flying Tomato", due to his red hair. In 2006, Rolling Stone wrote about the nickname, saying, "he used to embrace it, even wearing headbands with a flying-tomato logo, but he has grown tired of it." He has also been nicknamed "Animal", a reference to a character from The Muppet Show.

On September 17, 2012, White was arrested near a hotel in Nashville for public intoxication and vandalism after attending the wedding party of the drummer of The Black Keys, Patrick Carney.

White, who underwent two open-heart surgeries as an infant, has granted 17 wishes through the Make-A-Wish Foundation since 2008.

White was in a relationship with Sarah Barthel of the band Phantogram from 2013 to 2019. He started dating actress Nina Dobrev in 2019.

In 2016, Bad Things drummer Lena Zawaideh brought a lawsuit against White, claiming sexual harassment and breach of contract. White and Zawaideh reached an out-of-court settlement in May 2017; the terms of the settlement were not disclosed. At a press conference following White's win at the 2018 Winter Olympics, he was asked if he was concerned that the lawsuit and settlement would tarnish his image. In replying, he referred to the incident as gossip, a response that created widespread condemnation of White for minimizing sexual harassment. White later apologized for his choice of words.